Our friends over at Bucky's 5th Quarter (#BorderBattle) noted that the Badgers lead the nation in hockey alumni on NHL rosters (The season begins tonight).

So I took at look at other schools. Michigan was second at 15, while MSU and Boston College were tied for third at 14. 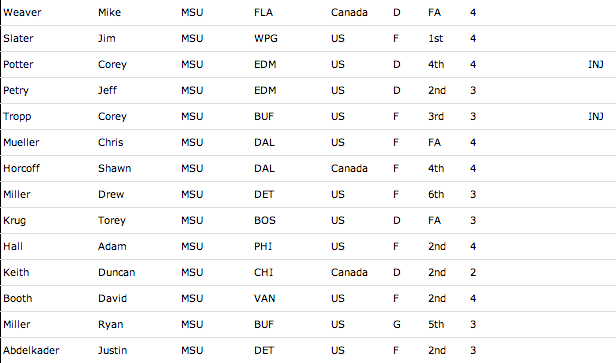 In total there are 210 former college hockey players in the NHL. Here's the whole list, from College Hockey Inc. More than 71 percent of college alumni played at least three years in college.

Here's how the entire Big Ten shakes out.

This will be the first season of Big Ten hockey. The preseason conference poll had Wisconsin as the favorite, followed by Minnesota, Michigan, MSU/Ohio State (tie) and Penn State.

MSU has the Green & White game this weekend, and the season begins against Western Ontario the following Wednesday (on FSD).

(If anyone wants to write about hockey, e-mail me at chrisvannini (at) gmail)