Mining the Box Score: Nothing but blue skies

Share All sharing options for: Mining the Box Score: Nothing but blue skies

I'm posting this, but I implore you not to look directly at it for risk of burning your retinas (big box): 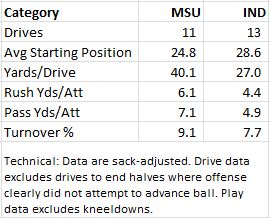 It all looks even lovelier than what you've seen elsewhere when you adjust for the number of real offensive drives each team had (MSU killed the clock to end both halves, and lost a possession due to the punt return fumble) and exclude MSU's four kneel downs.

This was actually the worst average field position MSU has posted this year--no cheapies for the offense.

Let's start with the defense. Not perfect, but plenty good given the level of competition on that side of the ball.  The defense posted a disruption percentage of 24.3%, which is very solid against a spread offense and is significantly higher than the two previous weeks.  As reported elsewhere, the large bulk of the rushing yards they conceded were on the early Tevin Coleman TD run.  Those still count, but for the bulk of the game the defense forced Indiana to earn their yardage one short completion at a time.

By my count, Indiana was 0 for 7 when attacking the Narduzzi Achilles' heel--deep passes against corner backs in single coverage.  (It's more like 0 for 9 or 0 for 10 if you count all deep passes.)  Trae Waynes was very good, stupid drive-extending dead ball personal foul excluded.  Denicos Allen (2 TFLs, 2 QBHs) and Max Bullough (1 TFL, 3 QBHs) were your disruption leaders.

For the season, the defense is now giving up exactly 3 yards per rush and 4 yards per pass.  Nice shiny, round numbers.

But we really want to talk about the offense. This was basically the best offensive showing by MSU of the last two seasons.  The team averaged 6.5 yards per offensive snap, which comes in below only the Youngstown State game and a little above the 6.2 yards averaged against Ohio State and Nebraska last season.  Jeremy Langford, Delton Williams, and R.J. Shelton ran the ball with abandon.  Connor Cook (completion percentage for season: 57.7%!!!) threw it around to 11 different guys.  Tony Lippett continues to surprise with the tough catches.  Bennie Fowler's hamstring injury is a bad thing, but at least wide receiver has somehow miraculously flipped to being a position of apparent depth.

The common denominator is a healthy, effective offensive line.  MSU posted an offensive disruption percentage of 9.5%, the fourth straight week below 20%.  There were still a couple badly blown pass protection issues, but those issues are now the exception, not the rule.  Keep wearing that garlic around your neck to keep AMSUOLHG at bay.

It was truly all clicking: a touchdown off an end around, a positive gain on a wildcat play, a successful screen pass, a long gain to the tight end.  The 71.4% conversion rate on third downs made the clicking particularly clicky, although that's almost certainly not sustainable going forward.  (Also helpful: 7 of the 14 3rd-down attempts were with 3 yards or fewer to go.)

Here's a big picture look at the team's progression on offense, using FO S&P rankings to measure opponent quality (not yet updated for this weekend's games):

The running game has been consistent, moving within the 4- to 6-yard range depending on the stoutness of the defense.  The passing game keeps getting better, with all the non-FBS opposing defenses actually looking pretty decent on paper at this point.  (Of course, the nonconference opponents' pass defense rankings are helped by having played us, and I suspect Indiana's ranking will suffer considerably this week after getting shredded by us.)

The 5.9 yards per carry that Williams is averaging in his first two weeks of action would seem to give the offense even more upside.  And we can now at least rule out the passing offense's improvement against FCS competition being a one-week fluke.

Random offensive stat: Cook is averaging 6.0 yards per non-sack rush attempt so far this season. That's not Denard-esque, but it's enough to keep defenses honest.

Special teams pointers. MacGarett Kings: Take one more half-step back on punt returns, please and thank you.  Mike Sadler: Change absolutely nothing.  I don't care if that tooth brush is worn down to the nubs.

Penalty Watch. All the ughs go here.  Excluding the Youngstown State game, MSU is now averaging 88.8 penalty yards per game, with the defense a bit more responsible than the offense.  It's good that the team is playing well enough to overcome the penalties at this point, but this will be much tougher to do when the calendar flips over to November.

Thinking Outside the Box Score. There were a lot of empty seats at kickoff for a homecoming game against a decent opponent on a gorgeous day.  The empty seats were all where single game ticket sales are.  How 'bout not forcing a second $80 premium game when such a game doesn't actually exist on the home schedule?  I have to believe the university left some money on the table relative to charging the standard $50 (which is where season ticket prices basically average out, anyway).

The Big Finish. As David Harns pointed out on Twitter, Mark Dantonio's approach to the quarterback position is looking more or less vindicated at this point.  The team is a heavy favorite to start the season 7-1 overall and 4-0 in the Big Ten, with the position totally stabilized entering the stretch run.

Yes, stabilizing it earlier might have been the different in winning the Notre Dame game, but only Nostradamus could have said Cook was absolutely the guy after fall practice and the season opener. (Again, if you make a decision based solely/mainly on practices, Andrew Maxwell is still the guy.)  Dantonio made the move to Cook at both the earliest and latest point he could have been expected to, really.  All's well that ends well.  With enough focused effort, you can block out the trauma of everything that happened in between.