Mining the Box Score: Grading on a curve

Share All sharing options for: Mining the Box Score: Grading on a curve

This won't hurt as much as you think it's going to (big box): 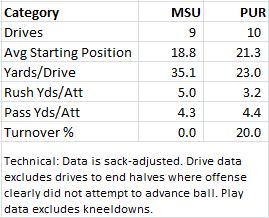 Spinning the offense. Statistical reasons to be charitable to the offense:

--Strangely for a game with only one offensive score, there was a very small number of drives for each side.  Yes, 7 points on 9 drives is still pretty dismal, but they might have done more with another 3 or 4 cracks at it.  And they moved the ball 61 yards on the final drive of the game (before two kneeldowns), which should count for something.

--They were given the worst average starting position they've faced this season.  Six of their 9 drives went for 30 yards-plus, with only one 3-and-out.  If they get the ball near midfield once or twice, they probably get at least a field goal out of it.  Purdue can't do much, but they sure can punt it, baby.  44.8 yards per punt for Cody Webster, with 4 of 6 kicks dropped inside the 20.

Subjective reason to be at least mildly optimistic about the offense: Unlike the many other depressing sub-5-yards-per-attempt passing performances we've experienced over the last two years, at least the problem can be easily pinpointed.  This wasn't another epic confluence of poor pass blocking, inaccurate passing, poor passing routes, and dropped passes.  It was only the second of those things.  The offensive line kept Connor Cook completely clean--zero sacks, zero QB hurries (which is consistent with my impressions)--and I don't think the receivers had a single bad drop, with a lot more separation from DBs than we saw early in the season.

It was all about poor throws by Cook.  Now, that's a major problem in and of itself, but at least it's a single problem.  We saw Cook make a lot of quality throws the last two weeks, so he's capable of fixing it.  This game does indicate that his accuracy the rest of the season will likely be inconsistent, rather than continuing on a continuous upward trajectory of improvement.

And, of course, it's a major positive that we're continuing to build off a very consistent running game.  Jeremy Langford looked somewhat Javon Ringer-ish in posting his 5.5 yards per carry.

Overall, the offense posted a decent disruption percentage of 17.2%.  They allowed a season-high 7 tackles for loss.  Two of those, bothersomely, were on pass completions to R.J. Shelton.  The other 5 were all on running plays--although only 3 of Langford's 24 carries went for a loss, all later in the game when the defense was keying on the run.

I'll close this section on a negative: This isn't the kind of game you want to have to use a trick play in to put the game away in the fourth quarter.

Holding the defense to impossible standards. 226 yards allowed, zero points allowed, 2 turnovers created, one touchdown scored.  And we say, "meh."  The defense obviously played fine.  It was a little lucky to get the shutout given the two missed field goals by Purdue (one of clearly makeable distance).  But, regardless, they did enough to have won the game on their own if absolutely necessary.

The defense's disruption percentage of 25.4% was its highest since the Youngstown State game.  Ten different players contributed to 9 tackles for loss, including 5 sacks.  Shilique Calhoun continues his better-than-the-early-NFL-entrant-he-replaced campaign.  For the season, he has 4 of the team's 16 sacks and a whopping 15 of its 45 QB hurries.  Max Bullough had the big play to create the defensive TD and led the team with 10 tackles.

Purdue's rushing game was a problem early, but not at all late.  Brandon Cottom's injury may have helped things a bit, but 26 of his 40 yards came on his first 3 carries.  His final 9 carries went for only 14 yards.

The single weakness for the pass defense was once again the screen pass.  Have to get a little better at sniffing those out.

Special teams. Uneventful, which is OK.

Penalty Watch. Great success.  Only 2 penalties for 14 yards for MSU, both of them on the defense.  One offensive penalty was declined.  Best penalty performance of the last two seasons.  More of this, please.

Thinking Outside the Box Score. Why I don't make predictions: The crowd size was actually pretty decent late in the game.  I'd say, ignoring the student section, the stadium was 80% full at the start of the fourth quarter.  That's partially a result of the game only having a one-score margin at that point and partially a result of the weather actually being quite lovely in the second half.  But way to go, fanbase.

The Big Finish. Here's a stat for you: The 35 yards per drive MSU gained Saturday is actually the third best number MSU has posted over its last 18 games--and higher than all of the team's final 11 games last season.  We're grading against a very feeble curve here--both in terms of MSU's past performances and the quality of the opposition on Saturday--but I don't think the step back the offense took in this game was quite as big as it would appear on first blush. 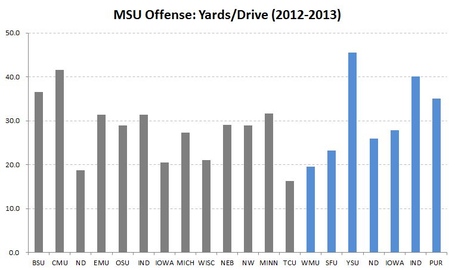 Get Connor Cook back out to the beach with Mr. Myagi to work on his footwork, and we can still pull this all back together.  That said, it needs to come together fairly quickly.  A similarly offensive point-deprived performance against an Illinois team with a functioning-to-above-average offense (26th in the country as of last week according to FO) could be quite a bit more costly.