Part III of the TOC Revelling-in-the-Blowout-palooza. 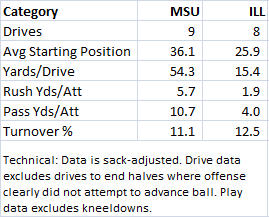 The offense: Running the dang ball. This was the most run-heavy MSU attack of the past two seasons. 73.9% of offensive snaps were rushing attempts, vs. a previous high of 61.4% against Nebraska last year. (The figure was right around 60% for South Florida, Youngstown State, and Purdue this season.) As Heck pointed out, the team ran the ball on 26 of its final 27 offensive plays. Rush defense was Illinois's clear weakness, and MSU took full advantage. Jeremy Langford, Delton Williams, and Nick Hill all went for 70-plus yards, and MSU quarterbacks combined for 47 (excluding sacks).

All that running put Connor Cook in position to hit open receivers in the passing game, and hit them he did. In 11 of the team's 21 previous games, the MSU passing game didn't even achieve half of the 10.7 yards/play it racked up Saturday (13.0 yards per pass attempt if you don't count sacks against the figure). As you're already aware, Cook's 93.8% completion percentage is the best figure in the history of such figures. For the season, Cook now has, like, normal looking passing statistics: 59.9% completion percentage, 6.3 yards/attempt, 12-2 TD-INT ratio.

Yes, Illinois has a terrible defense. But you can't really do any better than 54 yards per drive. After Cook's goal line fumble, the offense went 450 yards before they were finally stopped . . . by two kneeldowns to end the game.

That dominance was made possible by near perfection on third down: 14 of 15 chances converted if you exclude the final kneeldown on a 3rd down. It helps that 10 of those 15 third down attempts were with 4 yards or fewer to go, but they converted 4 of the 5 longer attempts, too, including the tip drill catch by Bennie Fowler on 3rd and 25.

MSU's offensive disruption percentage was a sparkling 7.2%. Outside of the 2 sacks that set up that 3rd-and-25, the Illinois defense only registered 3 disruptive plays: the forced Cook fumble, a TFL for 1 yard on the Keith Mumphery end around, and a single QB hurry.

I love if when a plan comes together.

The defense: Doing MSU defense things. The defense's dominance is slightly exaggerated by the fact that Illinois only had 8 real shots at driving the ball. But it was still plenty dominant. Nathan Scheelhaase was 5 for 8 for 59 yards on Illinois' opening drive. He was 8 for 13 for 44 yards for the remainder of the game. Josh Ferguson was almost completely bottled up until a 21-yard rush late in the game.

The defense's disruption percentage of 40.5% was the second best of the season, behind the Western game. Denicos Allen (3.5), Marcus Rush (3.0), and Shilique Calhoun (2.5) led the way in disruptive plays.

Illinois had been averaging 446 yards per game on offense, with a previous low of 327 yards vs. Washington. MSU yielded well below 50% of that. This plan also came together nicely.

Special teams: What are they? Poor Mike Whatshisface only got to punt the ball once (for 54 yards), and that was about the most eventful thing that happened on special teams.

Penalty Watch. Some hiccups early: 5 penalties for 34 yards, all in the first half. Three of the penalties were on the offense. Cook made a bad mental mistake by attempting to initiate an audible with 1 second on the play clock. That's where hopefully the soft start to the Big Ten season has given him time work those issues out. The team won't be able to afford them the next two weeks and beyond.

Thinking Outside the Box Score. Remember when I used to write about basketball? We might be pretty good at that. Number 3 says Mr. Hanner. Number 2 says Mr. Pomeroy. Beat the Lakers.

The Big Finish. Here's a rough picture of the football team's performance level to date, to be taken with a very large grain of salt: 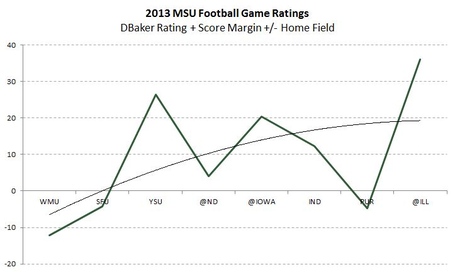 This uses Dan's margin-aware ratings, so zero means average for a D-1 team, and +10 is roughly the #25 team in the country. (I had to estimate a rating for Youngstown State using Sagarin ratings, which are relatively high on the team, with its 7-1 record.) A garbage time touchdown can swing this number a lot, so again: grain of salt. Basically, the MSU football team (1) has a terribly inconsistent offense but (2) has very likely improved significantly over the last two months.

I've typed something about the poor quality of the opposition like 15 times in the last month, but MSU has taken full advantage of the first half of the conference slate being so soft. A scoreline of 124-45 over just about any 4 games is worth writing home about. Yes, MSU hasn't played a schedule that definitively proves they're a top-25 team, but they could have easily proven that they're not, and that hasn't happened yet.

This is the position the schedule put the team to be in at this point. Now comes the fun part. Beat Michigan.