A Leap Towards Average?

Share All sharing options for: A Leap Towards Average?

I say, "If the Spartan offense can..." and then you all drone out, "be even average this season." and then we all finish together, "expect big things from MSU."

Well, after four games, MSU was not average. The Spartan offense (or, to be specific, its passing game) was in Badtown, population: us. And big things, with a 3-1 record and a trip to Iowa on the docket, did not seem especially expected.

But now, five weeks later, the Spartans are eight games in, and the verdict is, *chews lip* like, alright, I mean, probably? I hink we're close?

Let me explain what I'm talking about.

There's still a lack of a big play threat, but the Spartan run game has powered itself towards mediocrity on the back of many a 5 five yard carry on first down.

But chopping he data up a bit, we see a clear difference between the first 4 games:

where the running game was shouldering the heavy weight of nearly the entire offensive production and the next four games of the season:

where, I mean, that's pretty good, right? I hesitate to say unqualified 'good', but like, probably pretty good.

Productively bad: Avoids negative plays, doesn't turn the ball over, scores surprisingly many TDs, and struggles to move the ball through the air from play to play.

Prodcutively... productive? Few negative plays, 2 TDs a game and, average efficiency marks? Could it be? Dare we dream?

If your impression was "As goes the MSU passing attack, so goes the MSU offense', well, you're correct. The rushing game has been reasonably stable, while the passing game and thus the overall output, is subject to the whims of week to week swings towards good or bad. 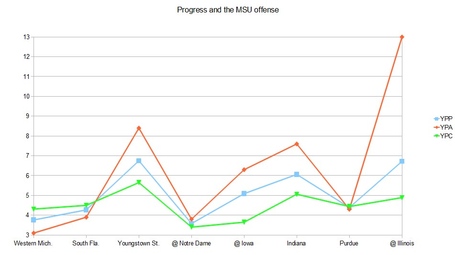 The expected accessory to this leap towards respectability is what the defense has already encountered and dismissed, concerns about the seaworthiness of MSU's opponents. Unfortunately for MSU's offense, I think there's a much stronger case to be skeptical of Michigan State's offensive gains, though it's not all bad news. Consider this:

The bolded teams are those MSU has already played, the unbolded are those who remain. On one hand, MSU's easiest three defensive opponents are in the review mirror. On the other hand, 4 of the top six toughest defensive opponents are behind them as well. On one hand, Purdue, Indiana, and Illinois are ranked 75th, 95th, and 113th nationally in this category respectively. On the other hand, Michigan, Northwestern, and Minnesota are just 28th, 47th, and 79th.

The fact of the matter is that after years and years of playing either two or three of Ohio State, Penn State, and Wisconsin during an era when those three generally bossed the Big Ten, they finally rotated off our schedule for one year and one year only. Happily, this means MSU gets to duck three of the conference's top six defenses and, because it does not have to play itself, ducks a fourth.

So, has the MSU offense gotten all the way to average yet? Maybe not quiiiiite yet. But it's awfully close. Those two ugly performances to start off the season will, deservedly, weigh around the team's offensive stats like an anchor, but conference play has shown an improvement of nearly a full yard per play, a significant rise that is understandably making people take a second look at this Spartan squad. A decent performance against a good, maybe very good, Michigan defense should win many more converts. #BeatMichigan