You'll read that headline, and you'll like it. Michigan State 26, Iowa 14 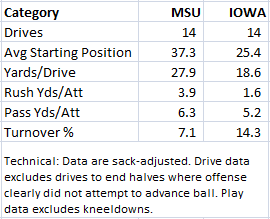 The offense, hooray, the offense. This was, in short, the best MSU passing performance against an FBS-level opponent in almost a season's worth of games, going back to the Indiana game last year. 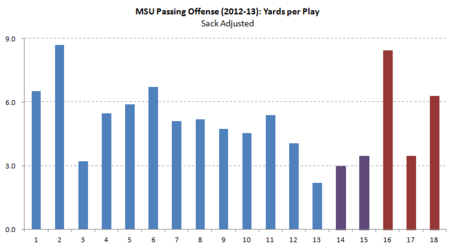 It might have been smart for us all to have given Connor Cook a little more of a break in South Bend, given that it was the first road start of his career.  He made a bunch of throws in this game that he didn't in that one--particularly throws of the 10- to 15-yard out variety.  Of course, it also helped that the receivers only dropped a couple passes and made a few real, live tough catches.

Bennie Fowler was the possession guy, MacGarett Kings was the playmaker, and Tony Lippett got things going early.  Overall, 9 guys had at least one reception, and 5 of them averaged 10+ yards per catch.  If there was any negative, it was that the tight ends didn't get involved this week.

Lest we get too confident, the team still ranks just 121st in the country in passing yards per attempt (and just 117th even if you only count Cook's numbers).  And the attempted two-minute drill to close the first half was pretty ugly.  But overall, this was a massive step in the right direction.

The rushing game wasn't great, but it was good enough against a pretty stout Iowa front seven.  Removing the Mike Sadler run off the punt fake, you get 3.3 yards per rush attempt.  The team struggled to convert on 3rd-and-short.  Hopefully, the emergence of Delton Williams will help remedy that in the future.

Williams' was trusted with some key second half carries to burn clock and came through quite nicely.  He only averaged 3.6 yards per attempt, but also didn't get tackled for a loss on his 9 attempts, running against a defense keyed in on the run. He and Jeremy Langford look like a pretty good power/speed combo here down the stretch.  This team still needs all the playmakers it can get, which makes burning Williams' redshirt well worth it.

For the third straight game, MSU's offensive disruption percentage was below 20% (16.5%), as the offensive line continues to gel (and not be smited, knock on wood).

If you're going to criticize anything in terms of playcalling, it would be the two shotgun passes on first and second down with a 9-point lead and 12 minutes to go, the second of which resulted in an interception.  Dave Warner must have gotten too excited about the functioning passing game he suddenly had at his disposal.  But that was the only hitch in a 16-0 second half performance.

The defense, the briefly-glitchy-but-still-glorious defense. Iowa should have just pretended it was near the end of the half every time they got the ball.  The two Hawkeye possessions to close the first half and the possession to end the game each went for 60+ yards.  Their other 11 non-kneeldown possessions went for a total of 57.

Iowa found some success passing the ball in around the MSU linebackers, but it was fairly short-lived.  MSU didn't change it's approach with its corners after the flag-fest vs. Notre Dame, and it paid off with two Darqueze Dennard picks.

On the ground, the Hawkeyes found absolutely zero room to maneuver. Mark Weisman had gone for 100+ yards in 4 of his first 5 game this year.  He went for 9 in this one.

The MSU defense only posted a disruption percentage of 19.7%, which is the fourth lowest mark of the last two seasons.  But they forced a ton of very short gains, and only gave up two plays of 15+ yards. Shilique Calhoun was the one disruptive force in the front seven, with half a TFL and 4 QB hurries.

Special teams, baby. Michael Geiger is the real deal. His only miss out of five tries was at least partially the result of too much leg (with the kick going over the upright).  He's 3 for 3 on kicks of 40+ yards now.  Kicker now looks like a difference-making position in a good way.

Also a difference maker: MacGarett Kings.  All together, he averaged 18.4 yards per touch on 8 touches of the ball (5 catches, 3 punt returns).

Even if you're not a 17-year old girl, Mike Sadler couldn't be any hotter.  He ranks a pedestrian 4th in the Big Ten in punting average, but he's dropped 14 of his 30 attempts inside the 20.  Plus, you know, he's a guaranteed 25 yards per touch in the rushing game.

Penalty Watch. Not the cleanest of games.  8 penalties for 70 yards, with another 3 declined for various reasons.  The offense was the bigger culprit, incurring 5 of the 8 penalties.  We'd hate to not having anything to complain about.

Thinking Outside the Box Score. Why would I want to think outside this box score?  I shall soak in it like a warm bubble bath.

The Big Finish. It's a new season.  Beat Indiana.