Inside the Playbook: Simplified Passing Concepts for Young QBs

In this article, we look at how MSU's coaching staff has simplified the playbook to give Cook easier reads and to become better at his timing on simple passing concepts.

Share All sharing options for: Inside the Playbook: Simplified Passing Concepts for Young QBs

Cook has been maligned as not being able to "hit the broad side of a barn" or "the ocean from a boat". Surely, there are other, more colorful phrases that have been painted on the young QB, some of them, at times, fairly accurate because of his inaccuracies. But, to Cook's credit, he has made improvement each week, as have the coaches in understanding simple passing concepts and reads to give him. It's become increasingly clear that, as the route concepts have simplified and his reps have multiplied, he has become more comfortable throwing the ball. In this post we'll look at a couple of the simple pass concepts that Michigan State deployed on Saturday, and why they are good plays for a young QB who has struggled at times putting the ball where it needs to be.

Smash Concept
Perhaps one of the most basic pass concepts in modern football, the smash concept was initially developed to take advantage of cover 2 defenses (or really any two high safety defense to a degree). Over the years, it has been adapted to theoretically work against any sort of coverage, but the main reason it's deployed is still to defeat cover 2. You can find info on the smash concept all over the internets.

The reason it is utilized so often for its simplicity is: it is a simple read for the QB who keys a single defender; it's outside the box and congestion that happens within it; it's typically easy to teach safe throws to the sideline.

Much like MSU is known to heavily lean on their cover 4, in the past, Iowa has been that way with cover 2. While they mix it up a bit more under former Spartan and current Iowa Defensive Coordinator Phil Parker than they did with former DC Norm Parker (no relation apparently), they are still favor cover 2. That gives good reason to deploy it here, so let's take a look: 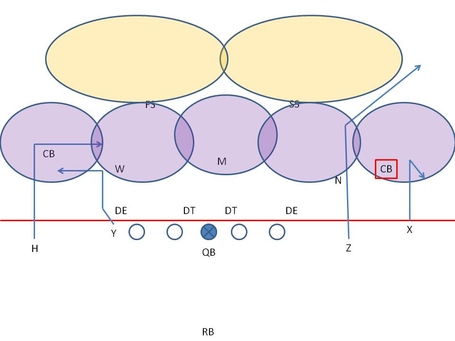 The basic idea here is to pick on the rolled up CB in the flat. The QB will read safeties (to see two high or one high) to flat defender (CB in cover 2). If the CB stays on the man he is initially over the top of, the corner route should come open. The safety needs to protect inside to out, and with the slot receivers tending to either be quicker athletes or flat out larger players, there is a clear advantage in the pass game when a safety is forced to come over the top and defend them. 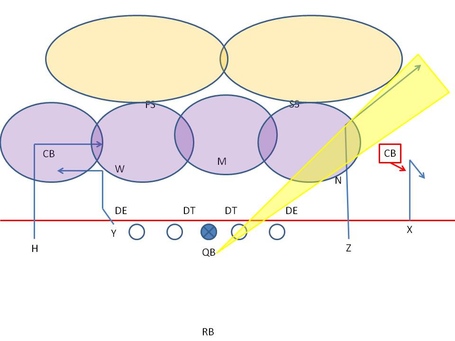 To counteract that, defenses will often sink the CB into the corner route. Well, if the CB continues sinking, then he can't defend the hitch to the flat receiver, which is still good for a 6 yard gain or so. 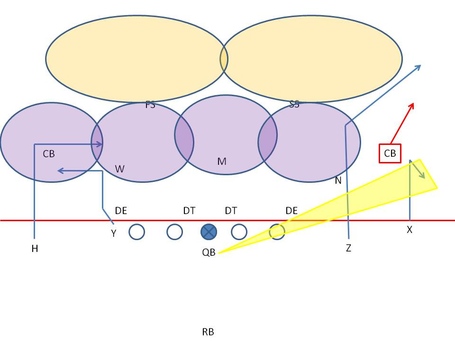 What this means is that the QB has a simple 1-2 read. This is why it's one of the first concepts taught to many high school QBs. Now, to say that without a qualifying it would be unfair to Cook. There is a good chance his high school team had this concept in their playbook. But I can promise that his high school team didn't stare down as many coverages (particularly not in a single game), and didn't face nearly the athletes at CB or safety.

The big change from the high school level to the college level isn't the read, it's the quickness of the read and release. Safeties are much better at getting over the top of late throws and forcing the pass to be squeezed in on the sideline. Late, and the pass will be force to be thrown out of bounds (as it was against ND in MSU's previous game) or short, which is very dangerous against a safety coming over the top that can make a play on the ball without flipping his hips.

Late also potentially gives the CB a chance to play both receivers, as he can stop sinking and be in position to flip his hips and undercut the route but still come up and make a play easily on the underneath receiver. Essentially, the technique and caliber of athlete far outweighs what is seen in high school.

On the flip side, throw too early and the CB never separates from the #1 WR. The safety is also still over the top of the #2 before the pass is thrown, meaning he can break on the ball to the corner before the receiver. So what it takes is reps and lots of practice. The footwork needs to take the QB through his progression so he can get the ball out when the receivers make their break. If the timing is there, the read is there, and the footwork is there, it's easy pitch and catch after easy pitch and catch against cover 2. But if that timing is off, because of the simplicity of the concept, it because exceptionally difficult to complete.

There are adjustments to 1 high coverages and man. These plays can still be completed against these formations, and to a small degree those are likely installed within what MSU teaches its WRs and QB, but they are probably simplified adjustments more likely to give the play a chance rather than make it a true threat at this point. My guess is that MSU is running a 2-high side and a 1-high side at this point, as to not force Cook to do more things than he has to. So for now, we won't continue going into depth.

Double Slants
Double slants, first and foremost, are on the receivers to get in the correct position. What this means is that regardless of the receiver's initial release, he must fight back inside and attempt to get between the defender and the ball. He must at least get underneath the defender so that he has a free release to the pass. After that, if both receivers can get into their slant, then it becomes an easy read for the QB. 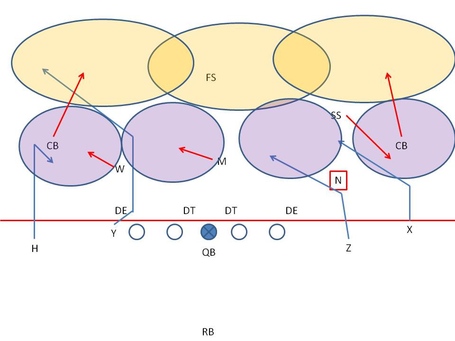 The QB frankly doesn't have to worry much about the safeties here. This is a quick three-step drop from under center or a one-step drop from gun. The key is the defender lined up over top of #2. If he follows #2, he hits the receiver behind the first slant, in the void just vacated by that defender. We'll look at it from a cover 3 perspective just to simplify it a bit. 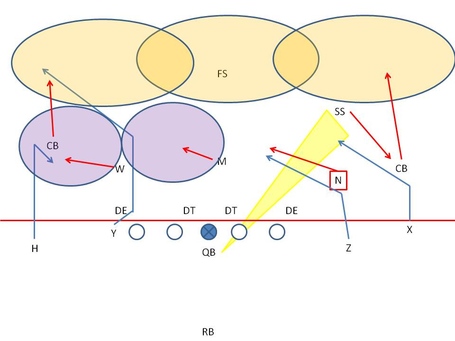 If he doesn't follow, he hits the inside slant. 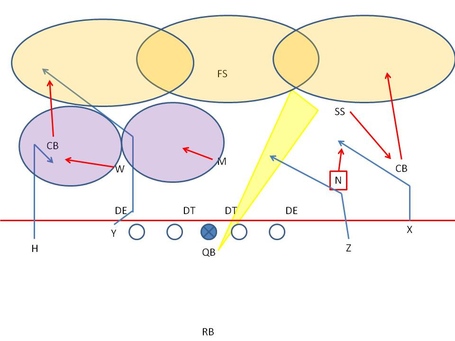 The key, then, becomes how the QB throws the football. Some of this will adjust based on if the QB reads man or zone. As a rule of thumb though, he can assume if the inside slant is released that the defense is in zone. He will then stop the receiver with his pass by putting the ball on his back hip and forcing him to sit in the zone so that the LB inside of him doesn't take his head off.

If the defender follows the receiver its likely man. The QB will place the ball on the WR's frontside shoulder so that the WR can run after the catch and the defender can't fight through the body to rake out the football.

Conclusion
There are intricacies here that probably aren't necessarily installed yet. The staff, for a lot of the game, is allowing Cook to have easy reads on passes that he reps continuously with his receiver corps in practice. This gives him the ability to get the requisite timing down and to improve his footwork and reads. Once those things are done, these two route concepts work well off of any successful run game and give the offense the opportunity to move the ball consistently through the air.