Mining the Box Score: Look what I found

Share All sharing options for: Mining the Box Score: Look what I found 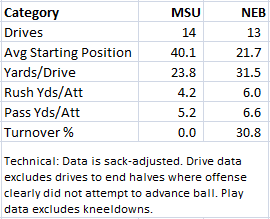 The defense: Mortality revealed. The Pat Narduzzi defensive scheme is played on a knife's edge.  Nebraska was the first MSU opponent this year with the playmakers to really take advantage of the weak points.  Ameer Abdullah and Imani Cross combined for 173 yards on 25 carries.  Kenny Bell and Sam Burtch combined for 167 yards on 12 catches.

This was the MSU defense's worst performance of the season on a per-play basis against both the rush and the pass, by a significant margin in both cases.  (Previous worsts: 4.4 yards/rush by Indiana, 5.2 yards/pass attempt by Iowa.)  Even if you exclude Nebraska's 75-yard garbage time drive, it was the most yards per drive the defense has given up this season. (Previously: Notre Dame at 27.2, Indiana at 27.0.)  And that's with four drives ending prematurely due to turnovers.

Those turnovers were, of course, the difference.  The Cornhuskers turned it over a total of 5 times when you add the fumble on the punt return.  Three of the four offensive turnovers were simply bad execution by the Nebraska offense (bad option pitch, ball thrown directly at DB on bad read, fumbled snap), with MSU happily scooping up the results.

The MSU defense posted a disruption percentage of just 19.0%, its second lowest mark of the season.  That's a little concerning given the patched up nature of the Nebraska offensive line.  The blitzes were a half-second from connecting, giving the Nebraska quarterbacks time to get the ball downfield.

The offense: Just enough. As Dan and Chris have already highlighted, Connor Cook's performance was a mixed bag: bad early in the game and on early downs, but very good on some big third down plays as the game went on.  In MSU's previous 9 games, the passing offense had produced 4.3 yards or fewer per pass attempt (including sacks) in 4 games and 6.3 or more per attempt in 5 games.  This was the first game to fall in between those two figures, at 5.2 yards/attempt.

Jeremy Langford continues to be Steady Eddie, hitting the 100-yard mark for the 5th straight game.  He's averaged between 4.5 and 4.9 yards per carry in 7 of 10 games this season.  Elsewhere in the rushing game, the creative stuff didn't work so well.  The team's 13 non-Langford rush attempts went for just 38 yards.  That included yet another doomed Wildcat attempt (this time with Delton Williams).  On the positive side, it also included the 3-yard power run up the gut by Heisman darkhorse Mike Sadler.

The offensive line clearly had its worst game of the season, as the team posted an offensive disruption percentage of 25.3%.  That's 8 points higher than any previous game in conference play. Randy Gregory (1 sack, 4 QB hurries) finally made Jack Conklin look like a former walk-on.

Minor gripe: Too much passing, not enough running on early downs.  For the game, though, MSU ended up running the ball on 57% of its offensive snaps, though, so this was a sin of only incremental degree.

Special teams: Continuing to be helpful. On top of the forced fumble on the punt return, Sadler continues to pin opposing offenses on their heels and Michael Geiger is money in the bank.  MacGarrett Kings pitched in with a 26-yard punt return, too.  (Kings currently leads the Big Ten in punt return average in conference play, although only 3 players have enough returns to be eligible.)  All that, and the turnovers, contributed toward MSU winning the field position battle by nearly 20 yards per drive.

Penalty Watch. Bit of a step back here after 3 weeks of relatively penalty-free play: 6 flags for 60 yards, with 2 penalties declined by Nebraska.  The offense was mostly at fault: 4 penalties for 40 yards.  Potentially the biggest offensive penalty, an illegal man downfield on a completed third down conversion, ended up not mattering, as Cook hit Keith Mumphrey in the end zone on 3rd and 13 on the next play.

For the season, the offense and defense are exactly tied with 30 penalties each.  This has no meaning, but I must justify maintaining that tab in the spreadsheet.

Thinking Outside the Box Score. Get your sleep this week.  We're looking at about 8 hours of MSU sports viewing over a 26-hour period this Friday and Saturday.  It's going to take tremendous focus to drink, cheer, and rant through all of it, but #SpartansWill.  (Related: Check now to make sure you still get TruTV so you can watch the basketball games.  I'm betting you haven't watched that channel since this past March.)

The Big Finish. Let's go ahead and concede that this win was backed by a heavy dose of good fortune.  Nebraska looked like the more talented team for the most of the game, and they may in fact be the most talented team MSU has played this season.

On the other hand, after last season, MSU was due some good fortune this season.  And a team that's gone undefeated through 6 conference games, winning each game by 12 or more points, doesn't exactly have to apologize for stumbling into a championship.

Still, there were some flaws exposed.  As remarkable as the team's improvement has been since the ball was kicked off on August 30, there's some more room for progress over the next three weeks.  Ohio State has some playmakers, too.

The magic number is down to 1.  Beat Northwestern at noon on Saturday, and we can unhesitatingly root for Minnesota to beat Wisconsin at 3:30, to boost our strength of schedule and get the number of potential Big Ten BCS teams down to two.