That's a performance worthy of the No. 1 ranking.

After back-to-back ugly outputs, MSU got out running and blew past Virginia Tech 96-77 in the semifinal of the Coaches vs. Cancer Classic. MSU will face Oklahoma on Saturday night.

MSU was good-to-great in just about every aspect. 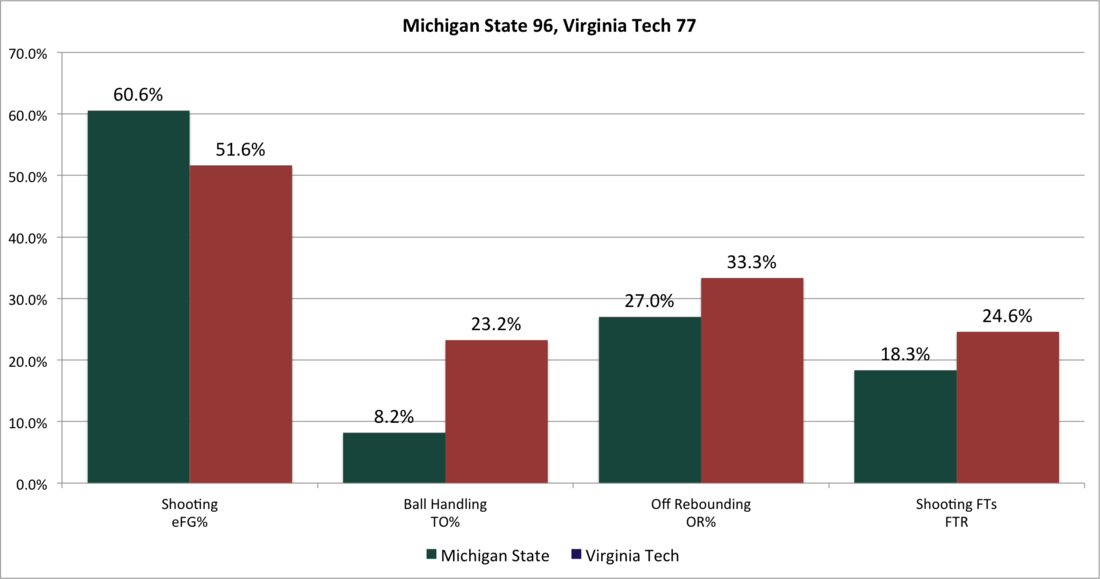 Virginia Tech started out by making six of their first eight 3s and sticking with MSU. But the Hokies went 7-for-the-next-19, as MSU pulled away late in the first half for a 46-33 halftime lead. Virginia Tech shot 35 percent on 2s, 48 percent on 3s and 93 percent at the FT line.

For a game with an estimated 73 possessions, MSU's six turnovers were a very impressive number, even if the Hokies were No. 345 in forcing turnovers entering the game. On the other side, VT was only turning the ball over at an 18.4 percent rate. Of their 17 turnovers, 13 were MSU steals.

MSU hasn't had a team defensive TO rate above 20% since 2007. Have to think this team, with Dawson, Harris, Trice and Appling, could do it.

The rebounding numbers, again, could be better. Still, Virginia Tech was grabbing 37 percent entering the game. It's one of the bigger teams MSU will face this season. The Hokies went 14-for-15 from the FT line, while MSU went 10-for-13, so there could have been more rebounds to be had.

MSU played basically seven guys in the first half. No messing around from Izzo this time. The fast break was working in a big way. At one point, MSU got a bunny layup attempt off a made free throw. Denzel Valentine missed the layup, but that's a freaky fast break. MSU finished 61 percent on 2s, 40 percent on 3s, 76 percent on 1s. Of MSU's 71 attempts, 35 were from behind the arc.

Adreian Payne: The most important player was the best one, putting in a career-high 29 points on 10-for-15 shooting, including 4-for-6 from 3. He was all over the place, grabbing 10 rebounds (two offensive), with three assists, three blocks, one steal and zero turnovers. When Payne takes so many 3s, MSU's offensive rebounding numbers are going to be down. If he makes them, it's a worthy tradeoff.

Branden Dawson: A guy who might not be getting enough love this season. He's been playing great defense, rebounding well and has cut out the dumb plays on offense. He finished with 12 points on 6-for-9 shooting, 10 rebounds (four offensive), two assists, three steals and zero turnovers. After three turnovers in the opener against McNeese State, Dawson has three turnovers in the past four games. He's confident with the ball on offense, but not doing too much. VT forward Jarell Eddie had 23 points, but a big chunk was going 6-for-9 from 3.

Keith Appling: Another guy who just did what he had to do. 13 points on 5-for-9 shooting, and most of that came on three second-half three-pointers. He also had seven assists, three steals and zero turnovers.

Gary Harris: Really just seemed off, especially early. He was missing open shots and at one point, just kind of fell down while dribbling the ball and turned it over. He finished strong, though. Final numbers: 19 points on 6-for-19 shooting (2-for-12 from three after missing his first 10), three rebounds, five assists, two turnovers.

Matt Costello: Wore No. 54 because someone left his jersey in East Lansing, but apparently Mark Hollis will get it at the football game and bring it back. His numbers were quiet: zero points on zero attempts, but he also had two rebounds, one assist, two steals, two blocks and one turnover. He battled some foul trouble, but when he was in there, he was fighting, which is what MSU needs to see out of that position. You'd like to see some more rebounds, but he was giving good effort, keeping rebounds alive and playing really good defense. A step forward for him, in my opinion.