Share All sharing options for: Recap: The Late Show with Keith Appling

This was a weird one.  Oklahoma jumped out to a double-digit lead early by beating Michigan State at its own new-identity game, scoring in transition and with dribble penetration.  But MSU quickly adjusted and closed the first half on a 34-9 run.  Play bogged down pretty early in the second half due to a plethora of whistles.  Foul trouble for Keith Appling and Branden Dawson, combined with Gary Harris suffering from cramps, forced Tom Izzo to play a Trice/Ellis/Valentine/Payne/Schilling lineup at one point, and Oklahoma took advantage, squeezing the lead back down into single digits.

Then Keith Appling came back in.  Appling scored 18 of his career-high 27 points in the final 10 minutes and 1 second of the game, putting the team on his back when there weren't really any other options.  Adreian Payne's scoring touch completely disappeared over the 22 hours since the Virginia Tech game ended (becoming perhaps a bit too jumpshot-happy), and Gary Harris was extremely limited in the second half due to the cramps.

Harris was phenomenal in the first half and still finished the game with 21 points.  He's been handling the ball more up top in the half court offense, which I think is a positive going forward.  If the game is going to continue to be called tightly, Harris forcing the action off the dribble makes a lot of sense.  Dawson had another great "glue guy" kind of a game, with 18 points, 10 rebounds, and 2 assists.  Denzel Valentine looked great as a playmaker in the first half, with 5 points and 5 assists (2 off spectacular spin moves), but faded in the second half.  His court vision continues to be a key to making MSU's perimeter-based attack work.

Oklahoma was an intriguing match-up as an up-tempo opponent who could match MSU in team athleticism, if not in skill level.  This game featured about 79 possessions, which would tie the McNeese State game for the most up-tempo game MSU has played since very early in the 2011 season.  It wasn't always pretty, but MSU passed the test. 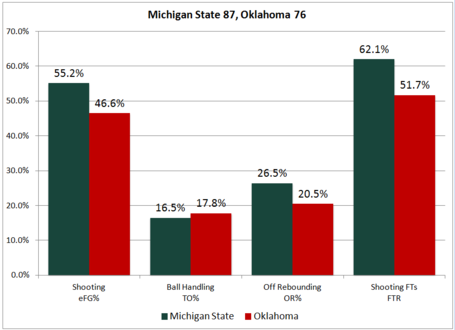 MSU outplayed Oklahoma by just a bit in all phases of the game.  For the weekend, MSU scored 185 points against two BCS league teams.  That's not bad.  They would have hit 90 points again tonight if their free throw shooting had been better than 63.9%.  MSU has now scored 87 or more points in 3 of its 6 games to start the season.  They only hit that mark once last season, against D-II Tusekgee.

If there's a major concern for this team, it continues to be depth, particularly in the front court.  Over the two games this weekend, Matt Costello, Alex Gauna, and Gavin Schilling combined for just 6 points.  The team doesn't need a lot of scoring out of the center position, but it will need more than that at some point.

Combined margin of victory for 26 hours of MSU fandom: +54.  There haven't been too many times since the dawn of MSU fandom when it's been better to be an MSU fan than it is right now.  Enjoy it.  Go Green.