Mining the Box Score: Wind at their backs

Share All sharing options for: Mining the Box Score: Wind at their backs 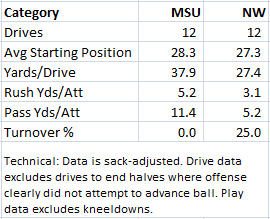 It was a tremendous Spartan weekend, but also an exhausting one.  So I'm going rapid-fire here.

Offense: At 7.7 yards per play, this was the most efficient game for the MSU offense in the last two seasons. The passing numbers are inflated by the somewhat fortuitous 87-yard TD by Bennie Fowler.  But, even if you remove that play, the passing offense averaged 8.2 yards per dropback.

Jeremy Langford ran through big holes on a beautiful mix of running plays.  Connor Cook hit almost every throw in the playbook.  Plus: No wildcat plays!  (The wide receiver runs were a bust again this week, but those at least serve the purpose of keeping the opposing defense off balance.)

Offensive disruption percentage of 11.5%.  Great success everywhere.  Blog post title to the contrary, it didn't really matter whether they were going with or into the wind.

Defense: The opposing offense got off to a good start, which has been something of a pattern of late.  But, as Heck and others have pointed out, that's almost become a feature, not a bug, as the MSU defense quickly adjusts to close down whatever gaps the opposing offense exploits early.  Still, probably best not to concede a couple early scores in Indianapolis.

Northwestern gained just 95 yards on its 7 second-half drives.  Once MSU built a multi-score lead, Trevor Siemian was forced outside the comfort zone of the option offense and threw 3 picks.  (Update: one of the picks was thrown by the backup.)

Defensive disruption percentage of 15.3%.  That's the second week below 20%.  Some of that is playing spread teams.  Some of it is not getting much pass rush without blitzing.  Here's hoping Pat Narduzzi is saving a few tricks at the bottom of the bag.

Special Teams: Like a number of the other top Heisman hopefuls, Mike Sadler didn't rack up big numbers this week. And they had an extra point blocked.  That's OK.  This was a good week to take a break.

Penalty Watch: Only 4 for 30 yards.  That's 4 out of 5 weeks below 40 yards.  Three of the penalties were on the offense, which was a little disjointed at times--particularly during the 2-minute drill that quickly turned into a 30-second drill.  The new-offensive-coordinator(s) thing may have been a factor there, given that the team hasn't had much opportunity/reason to run the 2-minute drill since the Notre Dame game.  At Mark Dantonio's request, though, we'll move on to another question.

Obligatory Isaiah Lewis targeting penalty comment: Unavoidable call by the book.  Difficult-to-avoid hit as a defender tackling a diving receiver.  In the end, it was basically an offsetting bad break for both teams (which hopefully has no long-term repercussions for Kain Colter).

Thinking Outside the Box Score: If you're going to Indy and can get tickets around face value now, I'd do it.  They're going for over $100 for nosebleed seats on the secondary market now.  IIRC, they were closer to face value at this point 2 years ago.  Plus the allotments for the schools were reduced from 15,000 to 10,000 each (because it's all about the fans, right?) and you can expect Ohio State's droves to be bigger than Wisconsin's given geography and Ohio State being Ohio State. 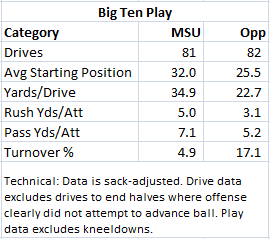 That's, like, a good offense--and an even better defense.  In conference play, Cook ranks 5th in yards/attempt and passer rating, 4th in completion percentage and yards/game, and 3rd in TD-INT ratio.  Above average has never tasted so sweet.

Seven double-digit wins in consecutive fashion.  This is the third season in four years that the program has won 7 Big Ten games.  It had hit that mark just twice in the previous 43 years.  Saturday will be a shot at going undefeated in Big Ten regular season play for the first time since 1966.

It's almost hard to remember this: 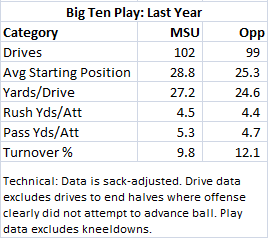 So let's not.  Don't pinch yourself, just in case this is all a dream.  It's only gotta last two more weeks.