Playing for the first time in a week, No. 1 MSU men's basketball took down Mount St. Mary's 98-65 in a mid-day affair at Breslin Center on Friday.

It was an easy win, but it wasn't without some early drama. Gary Harris didn't play due to a nagging ankle injury from the summer. Keith Appling, Adreian Payne and Branden Dawson all didn't start because they were late/skipped a class they share. Harris could have played, and he'll be back for the next game.

"You get near finals week, there's certain things you've got to take care of," Izzo said. "Unless you're dead, you've got to get it done. Those guys just didn't get something done that I told them they've got to get done and they paid a little bit of a price. It's more than the minutes, it's the embarrassment. That's just the way it's got to be, but they'll get over it, they'll understand it and get better for it."

Featuring a starting lineup that could be very close to next year's, the 2014-15 Spartans outscored MSM 19-16 before the real starters returned. The Mountaineers lit it up from 3 early, but as the shots stopped falling, MSU pulled away, as has been the case in recent games. 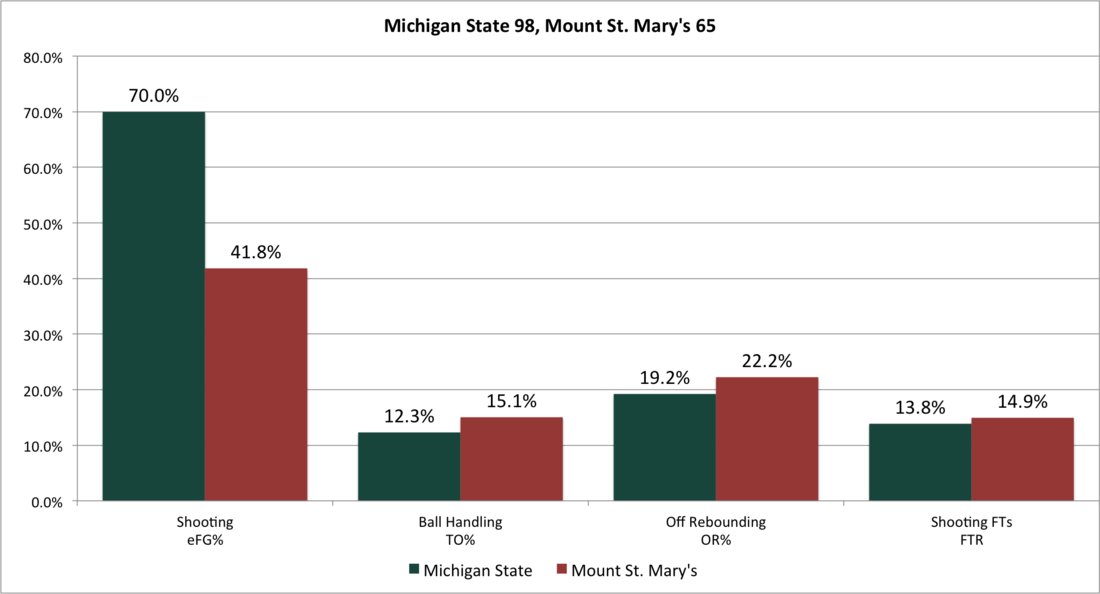 Ball-handling remains a strong point for this team. Offensive rebounding does not.

MSU grabbed just one offensive rebound out of 13 chances in the first half. They were around 30 percent in the second half, but the game was out of hand by then. Matt Costello had three rebounds in 12 minutes, none on the offense end. Again, this was against a very small team. MSU doesn't have a replacement for Nix at center. Adreian Payne has been playing on the perimeter. He's not going to get rebounds there, or when he takes 3s.

Russell Byrd led MSU with two offensive rebounds on Friday. Denzel Valentine had one, Gavin Schilling had one and Team had one. That's not going to work.

Dawson's offensive rebounding is up, Payne's is down, but no one has filled in for the loss of Nix here.

MSU's OR% of 31.9 entering Friday would be its lowest in the KenPom era, and again, against mostly sub-par opponents (and killed by Kentucky). This might just be a different style of MSU team, based on the pieces they have. If they keep hitting shots, they don't need to worry about offensive rebounding as much, especially in transition. But if those shots don't fall, the current rebounding is going to cost them at some point. On the defensive end, the rebounding has been good. Not coincidentally, that's when Payne is near the basket.

Keith Appling: 17 points off the bench on 8-for-11 shooting with five assists and two turnovers. Another good game playing in control.

Denzel Valentine: Got the start and put in career-highs in points (15) and assists (7). Shot 7-for-11 from the floor, 6-for-8 on 2s. Also had five rebounds and just one turnover. He's really taking better care of the ball this season.

Travis Trice: Got the start at point guard and showed what to expect from him next year. Scored 15 points on 6-for-8 shooting. He's taking (and making) a lot more 2s, clearly stronger and in better health, finally. Like Valentine, took care of the ball, with six assists to one turnover.

Adreian Payne: Scored eight points on just 3-for-11 shooting. Went 1-for-6 on 2s. Grabbed six rebounds, none on the offensive end.

Branden Dawson: Quietly did his part again. Six points on 3-for-3 shooting in 20 minutes. Grabbed 10 rebounds, but none on the offensive end.

Matt Costello: Eight points on 3-for-3 shooting and three rebounds in 12 minutes.

Kenny Kaminski: Helped MSU bust a zone defense with a pair of three pointers. He had eight points in eight minutes.

Taking care of the ball, hitting shots, not grabbing offensive rebounds. This isn't your typical Izzo team, for better or worse.

Next up: North Carolina on Wednesday in the ACC/Big Ten Challenge.