1. 8-0 in the Big Ten for the first time in school history. All eight wins by more than 10 points, which means first....

MSU is first Big Ten team to win all 8 of its conference games by double-digit points since the league went to an 8-game schedule in 1971.

2. Defense wins championships. Half of MSU's regular season opponents failed to score a TD on MSU. Five of the last six were shut out in the second half. Minnesota was scoring touchdowns in 72 percent of red zone trips this season (No. 22 nationally). They scored three points in three trips, including a missed field goal and a fumble.

3. Langford does it again. Running back Jeremy Langford tied the school record with his seventh-straight 100-yard game. He sat out some time after taking a hit to the head or shoulder. He had 134 yards on 21 carries, including another long one late in the fourth quarter.

4. Turnover bug. Connor Cook threw his fourth INT of the season on a poorly-designed play late in the first half. He also fumbled a ball away on a sack. He's taken really good care of the ball before today.

5. Great work, fans. More than 71,000 on a holiday weekend with the division wrapped up. Not much from the students, but most of them are at home.

6. We win the Honeycrisp Trophy! 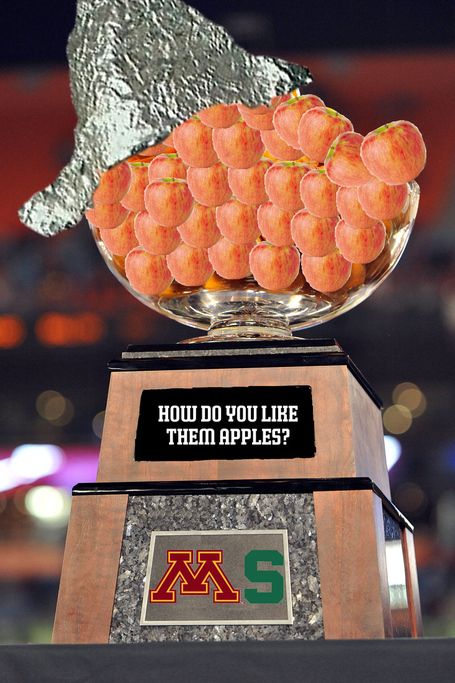