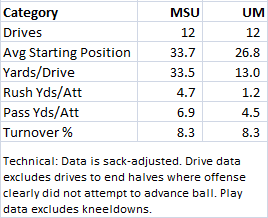 Big picture, we can actually recycle something LVS wrote after the 2010 MSU-UM game:

There are no such reservations about yesterday's victory.  Michigan State faced up against a massively hyped Wolverine team--a team led by Michigan's second consecutive winner of the widely coveted September Heisman Trophy--and MSU perfectly executed a fantastic gameplan to win in amazingly convincing fashion.  State won by getting into the backfield, tackling soundly, and preventing big plays on defense, and through an offensive attack which ran and passed with ease.  MSU's secondary didn't totally stifle Michigan's receivers, but the coverage was close enough to seize upon Denard Robinson's mistakes.  The offense was explosive without making its own mistakes.  And most stunningly, after an evenly-fought first quarter, Your Spartans dominated Michigan's offensive and defensive lines.  MSU was stronger and better in every meaningful facet of this game.

Devin Gardner didn't come into this game with quite the same hype as Denard Robinson did in 2010, but there are, if anything, even more recruiting service stars on the Michigan side of the ball now than there were then.  And this third-year Michigan coach is a Michigan Man--two capitol M's--making the stark contrast between the two team's level of physicality and execution that much more striking.  This Michigan coach isn't going away anywhere close to as easily as the last one did, but we're sure not helping his cause any.

Pat Narduzzi didn't play this one safe, to say the least.  He dialed up all manner of blitzes and dared Michigan to beat him with big passing plays.  They connected on a few, but the 7 sacks against Michigan's Swiss cheese line more than compensated.  Graph: 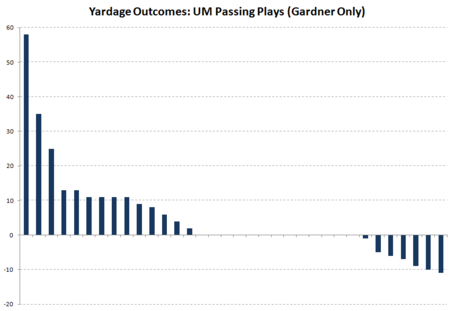 Only 9 of Gardner's 34 dropbacks went for completions of 10 or more yards, with only 3 picking up more than 13 yards.  Jeremy Gallon and Devin Funchess looked plenty dangerous, but Gardner rarely had time to get the ball to them downfield.

Even allocating the sack yards to the passing game, the MSU rush defense was extremely stout, allowing Fitzgerald Toussaint to pick up just 2.5 yards per carry.  Gardner, meanwhile, was swarmed every time he looked to run, gaining just a net of 3 yards on 11 designed runs or scrambles.

That moment early in the 4th quarter when Gardner pulled up short of the first down marker rather than get hit by a defender didn't matter practically--Michigan picked up the ensuing 4th-and-1--but it did nicely encapsulate the day's proceedings for the Michigan offense.  (Not that much of the blame for Michigan's offensive woes goes on Gardner. For most of the game, he played with admirable courage, given the quantity and force of the hits he was forced to take.)

The numbers above don't allocate the 20-yard loss on the high snap to either the UM passing or the rushing game.  Throw that in, and you're at 2.9 yards per play for a Michigan team that came in averaging 6.4 yards per play.  Accounting for pace, this was MSU's best defensive performance in conference play on a per-drive basis.

It all started with an MSU defensive disruption percentage of 39.7%--the defense's second straight week right around 40%.  Eleven Spartans posted at least one disruptive play, led by Shilique Calhoun (5.0) and Denicos Allen (4.0).  Ed Davis had a breakout game, with 2.5 sacks playing in the 3rd down package.

A defensive masterpiece, plain and simple.

The offense: competence, sweet competence. It took a while for the running game to get going.  As Chris pointed out, Jeremy Langford was only averaging 3.2 yards/carry before breaking off the 40-yard TD to put the final nail in the Wolverine coffin.  But he also only got stopped behind the of scrimmage on 3 of 26 carries, as this offensive line continues to avoid mistakes.  MSU's overall offensive disruption percentage was a reasonable 17.4%.

That 7-play, 97-yard drive to close things out was a thing of beauty.  Six Langford carries, plus the simple-but-super-smart end around to R.J. Shelton.  Running the ball effectively late in the game when the defense knows you're going to run it means you won the physical battle.

Connor Cook was far from perfect, missing a few open receivers along the way, but he was good enough, posting over 7 yards per pass attempt for the 4th time this season.  Bennie Fowler and Tony Lippett were the main beneficiaries.  Cook continued to show confidence in Fowler even after the early drop in the corner of the end zone, hitting him for the team's first TD in exactly the same spot (with a much better looking spiral, FWIW).  He also showed more ability to keep plays alive by scrambling and waiting for a receiver to break open than he has in the past.  It paid off very nicely on the 3rd-and-12 completion to Fowler, and could be a key factor going forward.

Your offensive breakout player was Trevon Pendleton, who picked up the team's most "explosive" offensive play of the year on the team's first snap from scrimmage and registered several key blocks along the way, as well.

For the all the strides the team has made in conference play, we didn't quite know if the trendline would hold when the team played a competent defense.  It held quite nicely.

Special Teams. Unsung hero: Michael Geiger.  His three kicks were all picture perfect, kicking in wet conditions from non-gimmee distances (40, 44, 35).  Take away one or two of those makes, and a 16-6 lead becomes 13-6 or 10-6, and the game doesn't have quite the same sense of momentum for MSU that it did midway through the 3rd quarter.

Just keep those extra points up a little higher, OK?  The fact it was still technically a two-score game after MSU's second TD created just a smidge of unnecessary anxiety.

Mike Sadler did his usual thing (3 of 5 punts placed inside the 20) to help MSU build the field position advantage they held for most of the game.

Penalty Watch. Well within acceptable limits: 5 for 25.  One of those was an intentional grounding call (the only "sack" Michigan registered), which isn't really a penalty issue.  Remove that and there were 2 flags each on the offense and defense.

Second, do your part to #FightTheNarrative by joining Mrs. LVS's worthy drive to make a slight adjustment to the first down chant at the Minnesota game.

The Big Finish. A three-score win over your in-state rival is a pretty good thing on its own.  But when the win positions you beautifully for even bigger prizes, it's an absolutely fabulous thing.  MSU is now in position to clinch a spot in the conference title game with potentially just two more wins.  (If Northwestern could just knock the gosh darn ball down, our positioning would be even more remarkable with three game still left to play.  Help a brother out, Michigan: Beat Nebraska.)

The MSU defense continues to be mind-bogglingly good.  It's been a model of consistency, holding all 9 opponents below 5 yards per snap and 7 of the 9 below 4 yards per snap.  And it's seemingly ramping up the pressure as we go along, with 35 TFLs and 22 QB hurries in the last 4 games.

The offense, meanwhile, has arrived at exactly the place we asked it to get to: averageishness.  In conference play, MSU ranks 5th in the Big Ten in rushing yards/attempt and 6th in passing yards/attempt.  That's all we need--through the end of the regular season, at least.

We can say it now: Rose Bowl or bust.