Share All sharing options for: Mining the Box Score: Indy-scribable

This is how the best night of my life ended: 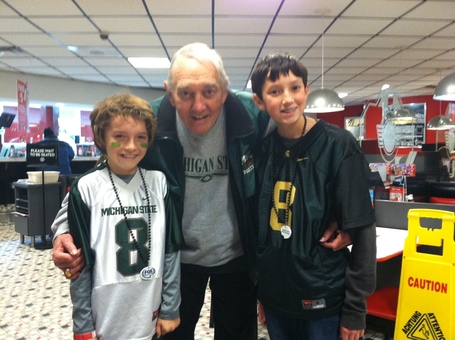 Those are my two sons. And Hank Bullough. In a Steak and Shake. At 1:30 in the morning.

The night could not have been more surreal.

I won't do the full "Now I can die" spiel, but, man, what a night.  Somehow, the tickets I got from MSU were in the second row off the field, at the far end of the MSU section, extended from the goalline of the "Ohio State" endzone.  The first two MSU touchdowns were extra glorious from that vantage point.  The final touchdown wasn't as great from a vantage-point perspective, but that didn't really detract from the moment.

I expect I have a few more decades left on this mortal coil, but I can't imagine ever topping that moment in terms of pure joy.  The game clinched.  My sons in my embrace.  Roses a reality.

But I won't, so here are the numbers (big box): 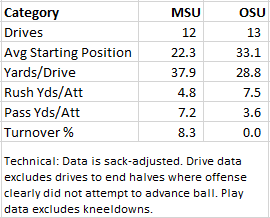 "Surreal" isn't quite the right word, but those numbers are definitely askew compared to what we've become accustomed to in the run through the Big Ten.  MSU lost the field position battle, the rushing battle, and the turnover battle (the first two decisively), but still emerged with a double-digit victory.

Because of the high-powered passing attack, of course! After 7 straight games in which the team ran the ball more often than it passed it, MSU dropped back to pass on 57% of its offensive plays in this game.  That's a season high.

The final average of 4.8 yards per rush is very solid, but nearly of all that came late in the game.  Jeremy Langford rushed for just 22 yards on his first 13 carries, then exploded late in the game for 106 yards on his final 11 (over the final 18 minutes of the game).  For whatever reason, MSU seems to run the ball better when the other team knows the run is coming.  I always thought the "wearing down the defense" line was cliché--the offense should be tired, too, late in games--but maybe there's something to it this year with MSU's depth on the O-line.

Anyway, MSU stayed pass-heavy even when they grabbed the 3-point lead late, which was the way to go.  Mark Dantonio played to win.  Connor Cook hit the 60% completion percentage mark for the 5th time this year.  He wasn't perfect--with a couple ill-advised throws into traffic on top of the one interception--but he was very, very good.  The first 300-yard passing game of his career couldn't have come at a better time.  The receivers all made plays, with Macgarrett Kings, Tony Lippett, and Keith Mumphery all picking up receptions of 30+ yards.

Two and half months ago, who could possibly have imagined clinching a Rose Bowl berth on the back of the passing offense?

Defense wins championships, literally. The numbers were weird here, too.  The MSU defense posted its lowest disruption percentage of the season at just 11.1%.  For the large parts of the game, MSU had no answers for the combination of Braxton Miller (8.1 yards per true rushing attempt) and Carlos Hyde (6.6 yards per carry).  But when MSU did get Ohio State in a third down situation, the inability of the Buckeyes to pass the ball consistently (8-21 for Miller) caused their drives to stall out.  Ohio State was just 1-10 on third down attempts, with 6 of the 10 attempts coming with 6 or more yards to go.

As far as 4th down defense goes, Denicos Allen managed to top his "Water Boy" play from two years ago in terms of memorable individual plays against Ohio State, shedding a block on 4th-and-2 to bring Miller down short of the sticks.  If Ohio State converts there, it's a whole different ballgame, with a game-tying field goal just 10 yards or so away.  Urban Meyer is a very smart man, but I don't know why you don't hand the ball off to your 240-pound running back who seems to fall forward for 2 yards on every play in that situation.  Hyde's total negative rushing yardage for the season stands at 5 yards--no missing digit.  But who I am to complain?

Darqueze Dennard lived up to the "No Fly Zone" catchline, with 2 pass break-ups and nothing at all happening when Miller threw the ball in his direction.  Isaiah Lewis put the 2011 championship game behind him with a team-high 13 tackles (9 solo).

Special Teams. Mike Sadler took himself out of the Heisman race with a merely average showing and the blocked punt could have been a killer if not for Allen's heroics, but the rest of it was great.  Michael Geiger continued his streak of perfection, and Kings was rock solid in the punt return department.  Also, we've never really given Kevin Muma his due on kickoffs.  We will miss the length of both his locks and his kicks next year.  (My younger son and I have a tradition of yelling "MUUUMMMMA" to the tune of "CAPTAIN CAAAVEMANNNN" before kickoffs.)

It didn't work, but I loved the 4th-quarter onside kick attempt, which was presumably based on seeing the gap Ohio State left on that side of the field.  Even when Ohio State recovered the ball, it only cost MSU 15 yards or so of field position.  More playing to win.

Penalty Watch. The team's dramatic improvement in this department held true, as they committed only 3 penalties for 20 yards.  One each on offense, defense, and special teams.

Meanwhile, it was MSU's opponent who got caught interfering with pass receivers.  Irony, of the sweet kind.

Thinking Outside the Box Score. I still say someone could make a killing selling single rose stalks for $10 a pop to fans of the winning team outside Lucas Oil Stadium.  I would have bought one.

The Big Finish. As others have noted, this really felt like three games in one.  Here's what that looks like statistically:

I'm not going to assign great narrative meaning to the games' swings, except to say it made for a helluva ride as a fan--something you didn't need numbers to tell you.  MSU won 2 of the 3 games-within-a-game.  And that was enough to get us to the biggest game of them all.  (Yes, yes. You know what I mean.  One giant leap at a time.)