The ride of our lives

The best football season ever, charted.

Share All sharing options for: The ride of our lives

Once something has happened, it easy for it to seem like destiny.  And, at this moment, the Michigan State football team's participation in the 2014 Rose Bowl sure feels like it was written in the stars.

But I thought it was worth taking a moment to look back at just how far this team has come.  Here it is, in graphical format: 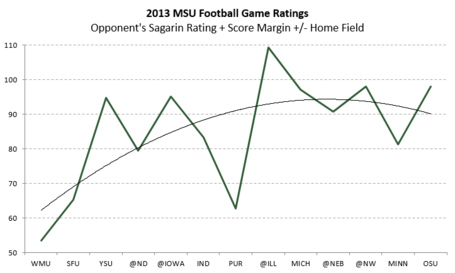 Given the nature of college football scorelines, particularly in blowouts, you don't want to read too much into any particular datapoint here, but the trendline certainly tells the story.  A Sagarin rating of 70 is equivalent to roughly the #70 team in the country; 80 is roughly #25; 90 is roughly #5.

MSU's first two opponents of the season, Western Michigan and South Florida, finished their seasons with records of 1-11 and 2-10, respectively (although USF was feisty, beating Cincinnati and playing UCF tight).  MSU's final margin of victory in those two wins was just two scores wide.  The South Florida game was a one-score game several minutes into the fourth quarter.

The argument that MSU was disadvantaged by not being ranked to start the season?  Well, that's at least partly because they didn't deserve to be ranked at that point.  They were lucky to have snuck into the coaches' poll going into the Notre Dame game.

While it didn't necessarily feel like it in South Bend, the team pretty quickly accelerated into playing like a top-25 team (ignoring the rather large hiccup versus Purdue).  And the amazing thing is that they didn't stop accelerating.  Over the final six games of the season, MSU played football at the level of a legitimate top-5 team, or above, in all but one game.

As the schedule got harder, MSU's performances actually got better.  The team's average margin of victory in its first six wins was 17.7 points (14.6 points accounting for the Notre Dame loss), with four of the wins coming against cupcakes.  Its average margin of victory in its final six wins was 20.0 points, despite four of those six opponents being bowl teams (plus the world's most dangerous winless-through-six-conference-games team).

Most of the improvement came in the passing game, of course.  MSU averaged 7.5 yards per (sack-adjusted) pass attempt in the final six games, vs. just 5.2 yards per attempt in the first seven.  Connor Cook slowly improved his passing accuracy and the receivers dramatically reduced their dropped passes.  The play design and calling also improved substantially, with Jeremy Langford's emergence allowing the coaches to implement the Mark Dantonio ideal of a run-first, ball-control gameplan (up until the Big Ten Championship Game, at least).

Sports fandom, particularly college football fandom, doesn't yield a lot of surprises at the level of full season results.  You've usually got a pretty good idea what you've got, and it's a matter of hoping to be two games better than the baseline rather than two games worse.  After those first two games, I would have said the baseline was maybe eight wins.  We got a whole lot more than that.

Certainly, the 2010 and 2011 seasons gave us a hint of what this program was capable of under Mark Dantonio's leadership, but the kind of leap in performance the team made this season--both compared to last season and within this single season--is a rare find.  It's a pretty good bet that MSU's next Rose Bowl (or Rose Bowl equivalent) won't take another 26 years.  But it's also safe to say the joy associated with it won't emerge in such an astonishing, rapturous manner.