Call it rust. Call it overlooking an opponent. Call it whatever, MSU doesn't look like a good basketball team right now, and given the injuries and illnesses, it's hard to know when things will turn around.

MSU defeated Oakland at The Palace on Saturday by a 67-63 score that was as close as the game. MSU trailed for most of the game, and its biggest lead was eight points with five minutes left.

It was another ugly offensive performance. Only five Spartans scored. Only three had more than two buckets. It took nearly 15 minutes before someone other than Adreian Payne or Branden Dawson scored. At times in the first half, it was as if MSU wasn't even running plays. The good news is that the defense was there and the rebounding returned. In the end, they got enough for another escape. 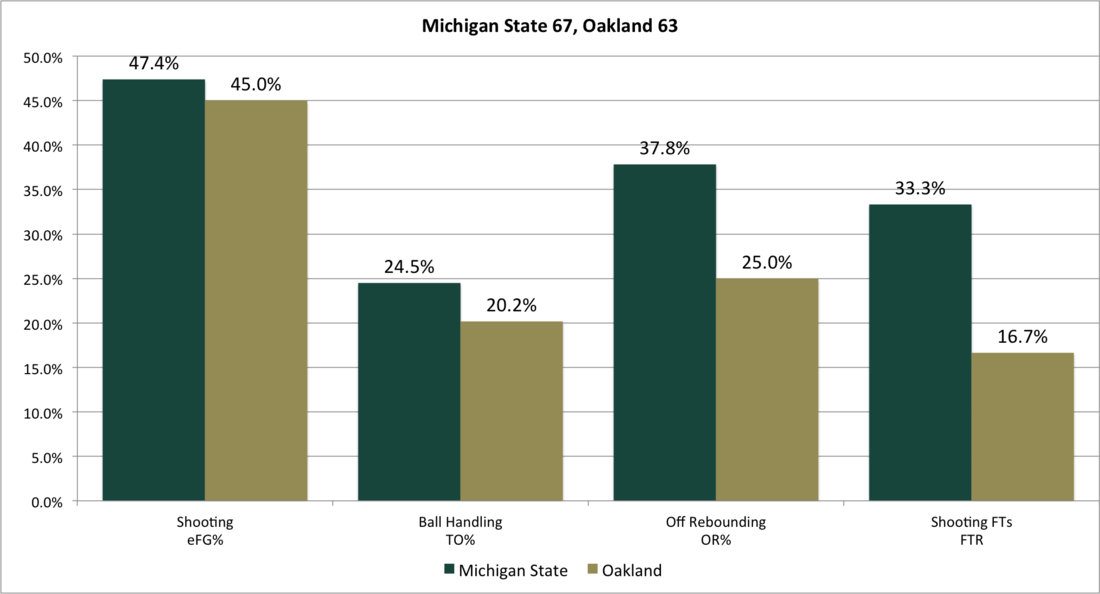 All of a sudden, turnovers have become a big problem for this team over the last two games. Early on, they were making up for poor rebounding by taking care of the ball. Now, they're not holding onto the ball, but the rebounding showed up on Saturday. Branden Dawson had five turnovers, all in the first half, Appling had five and Alvin Ellis III had three. So 14 of the team's 17 turnovers can be attributed to three guys.

I said in the preview that this had to be a game where the rebounding got back on track, and it did in a big way (pun maybe intended). Dawson and Payne combined for nine offensive rebounds out of the team's 14.

MSU hadn't been getting to the free throw line much (27.5 FTR, No. 338), but they did on Saturday, perhaps because Izzo said he's no longer going to be paranoid about the new rules. MSU got the ball inside more than they seemingly have recently, and it paid off against an Oakland team weak inside.

Adreian Payne: Continues to be MSU's top player, putting in 20 points on 7-for-16 shooting with 10 rebounds (four offensive). He went 1-for-3 from behind the arc, playing in the post more and using his size and skill advantage. His ability to stretch the D is big, but his play in the post is more important, going 6-for-13 on 2s and 5-for-6 from the free-throw line.

Branden Dawson: After getting benched against UNC, Dawson responded in a big way with 16 points on 7-for-13 shooting with 13 rebounds (five offensive). He had the five turnovers, but all came in the first half, when his increased energy was a bit out of control. He also had three assists, three blocks and two steals.

Keith Appling: The third of MSU's three main scorers led the Spartans with 21 on 6-for-10 from the floor (3-for-4 from 3 and 6-for-7 from FT line). He had four assists to the six turnovers, as well as two steals.

Alvin Ellis III: The decision to not redshirt Ellis looks like it's paying off. Ellis finished with four points on 2-for-3 shooting. He did have three turnovers, but his defense was very good in 19 minutes. He's starting to look like what MSU had in Brandan Kearney.

Denzel Valentine: Played 31 minutes and didn't score on seven shots. He did have six rebounds, two on the offensive end, and had four assists to one turnover. Valentine went 0-for-4 from 3 and is 6-for-21 on the season, but that's still a better percentage than Harris.

Next up is a home game against North Florida on Tuesday.