There's not much to say about Tuesday's game, and that's something we haven't been able to say for a while.

MSU defeated the North Florida Ospreys 78-48 in a game that was never close after MSU jumped ahead early. Most notable is that Gary Harris (ankle), Matt Costello (mono) and Travis Trice (feet blisters) were out, and MSU was able to cruise along to victory.

Denzel Valentine played point guard for a bit after some early fouls on Keith Appling. He looked good at times, but his turnover problem came back. MSU led 50-19 at halftime, looking as dominant as the score. The second half was kind of ugly, and North Florida actually outscored MSU, but it's clear the peddle was off the gas. And again, two starters and a top bench player were out. You hope this experience will help with emergency depth. 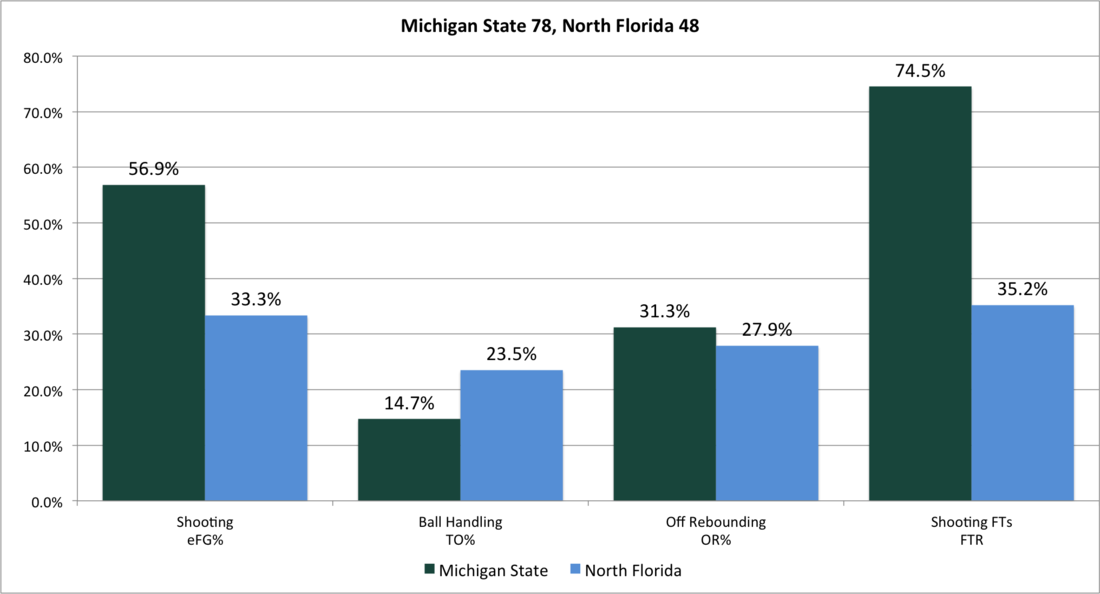 The turnovers were a problem against UNC and Oakland, but they took better care this time around, and that's without their top two point guards for much of the game. Offensive rebounding remains a problem, but when you shoot 70.8 percent in a half, there really aren't going to be all that many chances, and, again, effort in the second half wasn't always there. but for Payne and Dawson to not have an offensive rebound between them isn't good.

MSU was able to get to the free throw line, um, frequently.

Adreian Payne - He scored 19 points in 29 minutes, with 15 coming in the first half. He showed off all of his skills, going 6-for-10 on 2s and just 1-for-2 on 3s. The absence of Matt Costello has required Payne to play inside more, and it's paying off. He had seven rebounds, though none came on the offensive end (partly because MSU shot a very high percentage when he was in). Payne also had three steals.

Branden Dawson - Once again had the energy that was missing against UNC, scoring 12 points on just 3-for-4 shooting, with seven rebounds, all on the defensive end. He also had three assists, two steals and one turnover. Dawson went 6-for-8 from the free-throw line. He also did this (via @WorldofIsaac):

Keith Appling - Just eight points on 2-for-8 shooting while dealing with foul trouble (finished with four) in 27 minutes. Appling did have four assists to one turnover, along with three steals and a block.

Denzel Valentine - Got the start and had 11 points on 4-for-9 shooting. As mentioned, four assists, but four turnovers. Did grab six rebounds (one offensive).

Russell Byrd - Everyone's favorite player scored a career-high 10 points on 4-for-6 shooting, including 2-for-4 from 3. Blah blach maybe it helps his confidence blah blah. Good to see him do well and get some love from the crowd.

Gavin Schilling - Played 20 minutes and led MSU with three offensive rebounds. He went 3-for-4 and scored seven points, but he was just 1-for-6 from the free-throw line.

When they showed Schilling straight on, you could see he has a bad hitch in his free-throw stroke.

Alvin Ellis III - Played 20 minutes with MSU light in the backcourt. Scored four points on 1-for-2 shooting, but went just 2-for-5 from the free-throw line. Had two assists and no turnovers.

Next up: MSU plays its first true road game, traveling to Austin to play Texas on Saturday. There are two nonconference games left.