Ten games in, how does the 2013-14 Michigan State basketball team compare to last year's edition?

It's been six years since an MSU men's basketball team started the season with nine wins in its first ten games. So, on its face, this season is off to a solid start.

Dig down just a bit, though, and things have been a little rockier than we might have expected. The team's single loss came at home to a team (North Carolina) that was coming off two bad losses in its previous four games. And two of MSU's nine wins were single-digit victories over teams outside the KenPom top 100 (Columbia and Oakland).

So from a statistical standpoint, where are the issues? Funny you should ask. (Learn about the four factors here.) 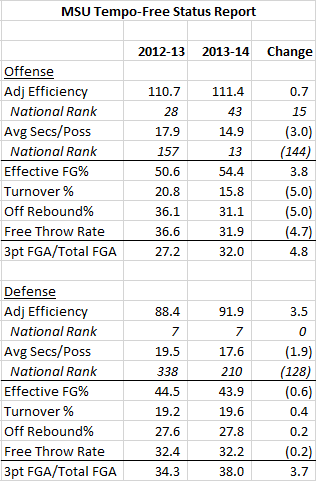 Keep in mind that outside of the efficiency numbers, these figures are unadjusted for strength of schedule. Given the usual slate of early patsies, this season's numbers to date have been produced against generally weaker opposition than last year's full-season numbers. The pace will also bog down quite a bit in conference play.

Coming into the season, we figured that Derrick Nix would be easier to replace on defense than on offense. And that's clearly been the case. The team is basically a carbon copy of last year's version on defense. While there's room for the team to improve on the defensive glass (#46 nationally), Adreian Payne and Branden Dawson have been very good in that department (23.1% and 22.8%, respectively, in defensive rebounding percentage). Matt Costello provides a shot blocking presence (10.3% block percentage), and Travis Trice is picking guys' pockets (4.6% steal percentage). The fact that neither of those two guys played last night is another part of the story.

The struggles (if they can be deemed that) have mainly been on offense. Despite the larger amount of room for potential improvement and the team's returning stable of potential offensive stars, the team has receded on that end. Part of it is the injuries, and part of it is simply Gary Harris' slow start shooting the ball (13.5 percentage point drop in 3-point FG%) prior to his ankle injury. But part of it is also adjusting to a new offensive identity. As shown above, each of the team's four-factor numbers, plus three-point attempt ratio, have shifted 4-5 percentage points.

The result is that MSU almost perfectly fits the bill for what Mr. Gasaway has called, quite intuitively, a perimeter-oriented team: more three-point attempts, fewer turnovers, fewer offensive rebounds, and fewer free throw attempts.  All at a faster pace.  This makes sense given (1) Nix's graduation, (2) Payne's midseason discovery of a very good outside shot last year, and (3) the team's (pre-injury) depth at the guard position.

As that Gasaway post asserted, there's no single best way to play offense. You adjust to the personnel at your disposal. If last year's team was the un-Izzos, this year's team might be the anti-Izzos. And that's OK. Tom Izzo is a good enough coach to win in more than one way. (And he's had some success with a perimeter oriented attack in the past. Think of the 2014 team team as the 2005 team if you replaced Paul Davis with Adreian Payne.)

Certainly, Izzo will push his team to crash the glass on offense and get to the free throw line more regularly, but we should also recognize that those things are happening less in part because we haven't seen the same kind of turnover problems we've seen so regularly early in previous seasons.

There's been a lot of clamoring for Adreian Payne to play closer to the basket on offense--and he has posted up a bit more the last couple games--but I'm not convinced the main problem with the offense is that a guy shooting 46.7% on 3-point attempts (41.3% for his career) is taking too many jumpshots. Payne's strength has never been establishing good position down low, and the other bigs aren't going to become regular low-post threats against quality opposition by the end of this season. (Costello's indefinite absence won't help there.)

Diversity in your offensive attack is good. But having a player who can defend opposing centers but shoot the three on offense is a pretty nice asset.

The ceiling for this team hasn't changed. I think the amount of time it's going to take to reach that ceiling has clearly lengthened, though. That's mainly a function of injuries--at the moment, the team is missing three of its top seven players, with two other guys (Appling and Payne) pretty banged up. But it's also a matter of growing into a new identity.

When everyone's been available, the team has played spectacularly in prolonged bursts leading to their best wins: the first ten minutes of the Kentucky game, the middle half of the Virginia Tech game, the second ten minutes of the Oklahoma game. This is a roster that can create turnovers on defense, get out and run in transition, and share the ball and knock down threes in the halfcourt offense.

With Ohio State and Wisconsin both having an easier time replacing key departures than we might thought, the conference season is looking like more of an uphill climb. As MSU gets healthier and more cohesive, though, the primary goal remains the same: peaking in March.