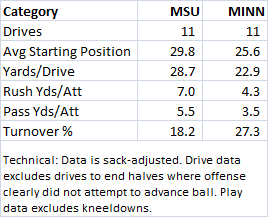 Those numbers are more flattering than the gross yardage figures--324 to 249 in MSU's favor--since Minnesota ran roughly 50% more plays than MSU did.  The Gophers held the ball for 38 minutes, which once again proves that time of possession is football's #UnicornStat.

The main thing that kept the game close was third down conversions, as Minnesota converted 40% of them (plus an early fourth down conversion) and MSU converted nary a one.  The latter is partly a function of MSU not encountering any true short yardage situations on third downs (no attempts with 1 or 2 yards to go; they did fail on a 4th-and-1, though), partly a function of Connor Cook not throwing the ball with great accuracy, and partly just plain dumb randomness.  MSU finished the regular season ranked 4th in Big Ten play in third down conversion percentage at 46%.

(Also, one of the 3rd-and-3's was a #WHYldcat attempt IIRC.  If I have one regret this season, it's not specifically tracking MSU wildcat attempts, so I could quantify just how futile they have been.  In-depth X's-and-O's analysis: When you line up in the wildcat, the defense knows you're not going to pass the ball.  This is advantageous for them.)

Turnovers also held back both sides.  This was the first time MSU has turned the ball over twice in the same game all season.  Glad we got that out of the way.

The MSU passing game was fairly disjointed generally.  The offense posted a disruption percentage of 21.6%, which was the third highest number of the year.  Most of that came on passing attempts, as Jeremy Langford was only caught for a loss twice in his first game above the 6.0 yards/carry mark.

Pulling the passing game together will be the number one key against Ohio State IMO, against a defense that ranks in the bottom 3 in the Big Ten in passing yards allowed and bottom 4 in pass efficiency defense in conference play.  MSU finished the conference season ranked 3rd in passing efficiency (with Cook ranked 4th as an individual), so we do know the potential is there at this point.  Compared to the start of the season, the passing offense has made enormous strides, but it's still pretty inconsistent: 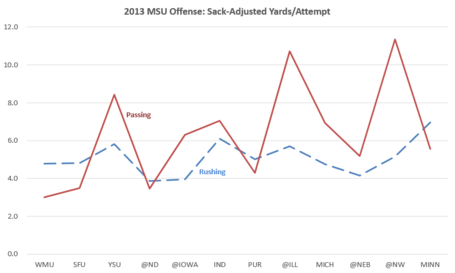 Tony Lippett (4 catches, 71 yards) is now the team's season leader in catches with 35 (Kings has 34).  He's 42 yards behind Fowler.  Add that to the list of things absolutely no one would have predicted before the season, or even early in the season.

The defense, meanwhile, rebounded in the disruption department, posting a disruption percentage of 28.4%, which is right around their season average.  Denicos Allen led the way with 2.0 TFLs and 3 QB hurries.  Shilique Calhoun and Marcus Rush (2.5 TFLs a piece) were around a lot of the action, too.

The defense has been a little more bend-y since the Michigan game, but these are hardly numbers you can complain about: 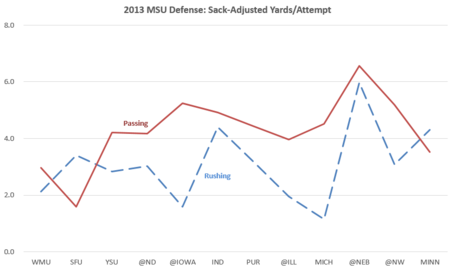 When you feel like your rush defense has had a bad game, but they've allowed the opposing tailback to gain only 3.7 yards/carry, things are going OK.

I've muddled the offense and defense together.  On to special teams, which were A-OK.  Mike Sadler doing Mike Sadler things, and Macgarrett Kings broke off a nice punt return for 29 yards.

No bold for the Penalty Watch either: also A-OK.  Two penalties for 15 yards on MSU, and one was an intentional grounding penalty which already shows up in sack yardage.  The other penalty was on the defense, with another defensive penalty declined.  The team has made great strides in this department as the season has progressed: 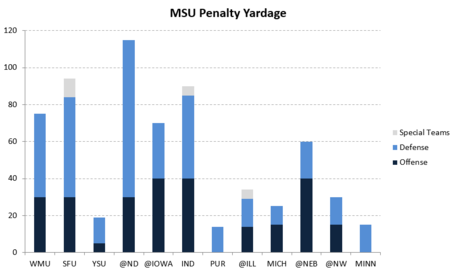 The Big Finish does get bolded.  Prior to the season's start, which seems like it was about 3 years ago, I said this:

This is a big year for Michigan State football in terms of program perception, recruiting profile, and future season ticket sales. But it's also a big year in terms of the opportunity for on-field success that presents itself. The question marks on offense remain pretty big going into Friday night. But the question marks on defense are about as minimal as you're going to find. And the schedule sets up about as nicely as you could ask for, as the team will be allowed to ease into both the nonconference and conference seasons. November could be quite a ride.

I wouldn't use any form of the word "ease" to describe the nonconference season.  Also, the schedule didn't end up mattering that much, with three games of buffer in the final Legends Division standings (maybe for BCS purposes, though), and November was a pretty smooth ride.  But the program definitely came up about as big as you can in a big year, regardless of what transpires on Saturday and New Year's Day. 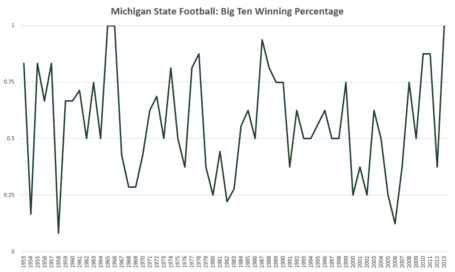 Enjoy it, my friends.