Recap: Deep in the heart

Note the cheerleader's face in the bottom right of the photo.

Share All sharing options for: Recap: Deep in the heart

With the team low on healthy bodies going up against a big Texas team coming off a win at North Carolina, MSU fought its way to a surprisingly comfortable 92-78 win in Austin on Saturday, taking a lot of momentum into Christmas.

The story of the game was going to be what happened inside. MSU had just two offensive rebounds in the first half (14 percent) and trailed by two at the break, but they did much better on the glass in the second half. Adreian Payne scored 33 points, including 8-for-8 on 2s and 11-for-12 from the line, and MSU was able to pull away in the second half and make a lot of free throws (27-for-33).

Oh, and this happened.

(Note Gary Harris at the end of that)

MSU moves to 10-1 on the season with one nonconference game remaining. Also, kudos to all the MSU fans at the game. Some loud "Go Green Go White" cheers. 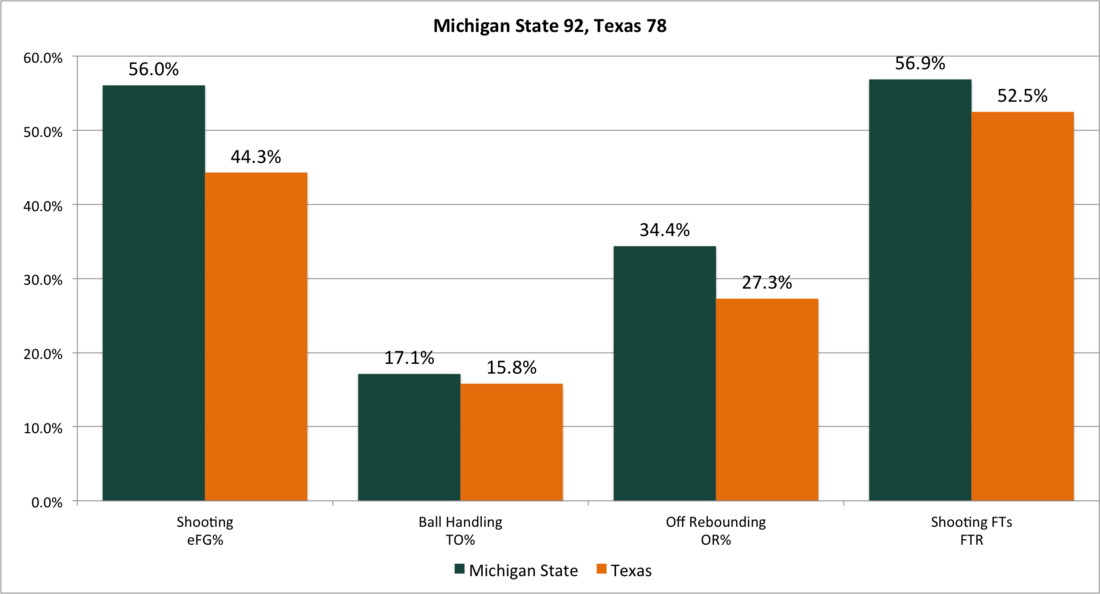 Against a good Texas defense, MSU shot 50 percent from the floor (61 percent on 2s and 32 percent on 3s). Texas isn't a great offensive team, but with a size advantage inside, MSU was able to hang in there. The Longhorns shot 41 percent on 2s.

Turnovers were a problem in the first half, but MSU took better care in the second.

Those rebounding numbers are stunning, frankly. Texas came in as one of the top rebounding teams, while we know MSU has been struggling on the offensive end. A dominant second half on the glass (nine offensive rebounds) coupled with continued solid play on the defense end gave MSU a good advantage on the glass, by the end.

Adreian Payne -  Where would MSU be without him? How much has his draft stock risen already by coming back? We've wanted Payne to play inside more, especially against this big Texas team, and the man was everywhere. I already mentioned 8-for-8 on 2s and 11-for-12 from the free-throw line for a career-high 33 points. He also went 2-for-5 on 3s, grabbed nine rebounds (two offensive) and had two assists.

Branden Dawson - Another solid performance, scoring 11 points on 5-for-10 shooting with 10 rebounds (five offensive). Just 1-for-4 at the free throw line, but had two assists, one steal and two turnovers.

Dawson has 10 rebounds today. His 7th double digit rebound effort this season. BJ had 8 such games in his previous 2 seasons combined.

Gary Harris - Looked rusty coming back from the ankle injury, but still put up 19 points off the bench. Shot 3-for-5 on 2s and 1-for-3 on 3s. He was able to penetrate and draw a lot of fouls and went 10-for-11 at the free throw line. Also led MSU with five assists to go with one steal, one block. Only one rebound, but if this is the rusty Gary Harris, it will be great as he gets healthier.

Travis Trice - Was a big part in keeping MSU in the game in the first half. Scored 13 points, going 3-for-4 from long distance.

Keith Appling - Struggled mightily, scoring four points on 2-for-11 shooting with two assists and two turnovers. For MSU to win a big road game by this margin with Appling almost being a liability is a testament to the backcourt depth. It appears that wrist injury is still hampering him. His 3-pointer seemed to take forever to develop. Another guy who will benefit from a holiday break.

Denzel Valentine - Led MSU with 11 rebounds in the start, 10 coming on the defensive end. Scored eight points on 3-for-8 shooting, with two assists, one block, one steal and two turnovers.

Gavin Schilling - Was this the game where Schilling finally overtook Alex Gauna on the depth chart? Schilling played 12 minutes and grabbed five rebounds (two offensive) and scored four points. One on an offensive putback and the other two at the free throw line.

Gavin Schilling has 11 points and 10 rebounds in 32 minutes over the last two games.

Next up: New Orleans at home in the final nonconference game next Saturday. Until then, a time to enjoy the holidays and heal up.