OK, so I'm going to admit I didn't watch too much of this game. I was flipping back and forth between this and the hockey game against Michigan. It was a slow start, but MSU led New Orleans 44-27 at halftime, and the second half was a huge rout.

The basketball team played one of the worst teams in the nation, and the result was expected: a 101-48 final score against the Privateers, with the walk-ons sending Breslin into a frenzy (a frenzy, I tells you) with some late buckets.

Branden Dawson didn't play with a leg injury, but Tom Izzo said he could have played. Matt Costello didn't play, but Izzo said it's looking better that he'll be ready for the Big Ten opener. 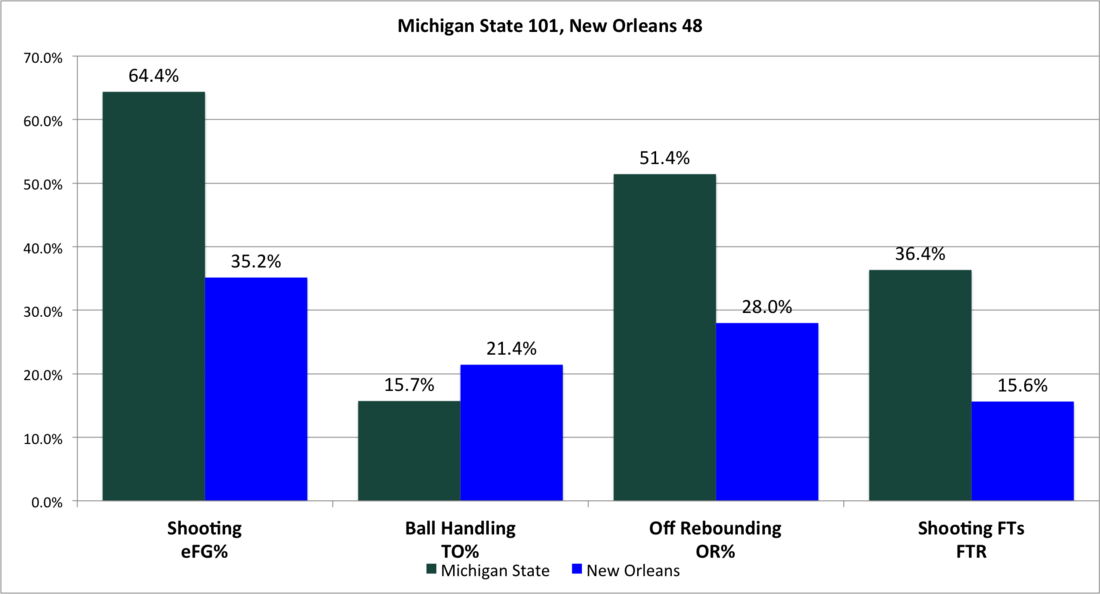 MSU's 1.44 points per possession against New Orleans was their best since they last scored 100 vs Nebraska-Omaha in Dec. 2011.

Keith Appling - His best game of the season, scoring 27 points on 7-for-10 shooting (4-for-4 from 3) in 30 minutes. Also had eight assists to one turnover and one steal. A near-perfect performance, and a confidence-booster after the Texas struggles.

Gary Harris - Scored 19 points, but didn't need to rely on free throws this time (1-for-1). Shot 7-for-17, including 4-for-11 from long range. He missed four threes in the early minutes, still appearing to show some rust and trouble from 3-point range. He went 3-for-6 on 2s. Harris did grab nine rebounds, including a team-high five on the offensive end.

Adreian Payne - A quieter performance, scoring 17 points on 7-for-11, all inside the arc. He also had seven rebounds and two blocks.

Denzel Valentine - Another terrific rebounding performance for Valentine, with a career-high 13 boards, including 10 on the defensive end.  He completed the double-double with 10 points on 4-for-9 shooting. He went just 2-for-5 on 2s, continuing to struggle to finish at the rim, at times. He had six assists and just two turnovers in 28 minutes.

Alex Gauna - Scored six points on 3-for-3 shooting and had five rebounds (two offensive) in 10 minutes, but there's a reason he only played 10 minutes.

Next up: Big Ten opener at Penn State on New Year's Eve at 5 p.m. Expect a raucous environment.