In this post we look at how Michigan State will utilize several looks from their jet sweep package to take advantage of Ohio State's athletic defense.

Share All sharing options for: Inside the Playbook: Michigan State's Jet Sweep Package

Michigan State faces a very athletic defense on Saturday, when they meet Ohio State in Indianapolis for the Big Ten Title. For the past couple weeks, the Spartans have added several deviations of their base play calls, seemingly to set up and prepare them for the show down against the Buckeyes. In this post we are going to look at MSU's jet sweep package.

Jet Sweep
The jet sweep has become increasingly popular over the past decade or so, really coming into form when Houston Nutt first introduced his wildcat formation at Arkansas. It's important to distinguish this from an end around and a reverse.

Reverses, End Arounds, and Jet Sweeps are 3 different plays designed to take advantage of different things from a defense. Reverse initially attacks 1 side before reversing fields and takes advantage of horizontal over-pursuit. End-Around has middle action attached & takes advantage of vertical over pursuit (by getting depth and around squeezing EMOL). A jet sweep has no misdirection in and of itself (though it will often be paired with a run call and used in its own right as misdirection) and is simply a sweep with jet motion attached. It is designed to get to the edge before the defense and is often utilized by teams with receivers that have more speed than their power backs.

So Michigan State uses the jet sweep as a way to get outside the defense. This is especially important for teams that specialize in inside runs, particularly plays like Power O which can be squeezed down to take away any run creases. But as DEs squeeze down or LBs attempt to read and react, the easier and more important it becomes for a WR to beat the defense to the corner. 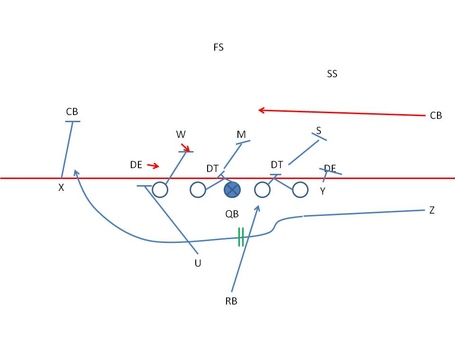 Keys here for an effective jet sweep are that the snap should occur when the motion player is between the tackle and the guard. The QB does a reverse pivot from under center and hands the ball to the WR. As soon as the WR receives the ball, he'll take another bucket step back to gain enough depth to get around the edge and not get grabbed from inside. The WR will threaten hash, numbers, and then sideline to cut upfield. Once upfield, you want him to get outside and run up the alley down the outside of the field.

Jet Sweep Fake - Inside Zone
As teams become more successful running jet sweeps, you'll start to see defenses adjust. For instance, when OSU faced Wisconsin's jet sweep, they automatically brought down the safety to the playside to shoot upfield in the alley and gain leverage at the snap, forcing the ball carrier back inside and into run support or gain depth to allow time for support to get to the corner before the ball carrier.

Other teams will try similar things with OLBs (or even by widening the DE, though this requires very athletic and aware DEs and isn't really a recipe for success) and the concept is the same. At the same time, the inside LBs and backside LB will tend to scrape over the top to track down the play from behind in run support.

To counteract this, many teams install an inside zone run off of jet sweep action (you can run it will basic Power O blocking, but in my opinion this tends to be more difficult to get the blockers in good position to pull it off unless you're blocking the front side with a read option (read: inverted veer); so if you insist on running a man scheme to block it, I recommend a down G look instead). Running away from action or to action will vary depending on the team or simply by the call, but both work equally well becomes of the concept of the inside zone. Running away from the jet motion will take advantage of LBs scraping over the top. Within the inside zone there are three reads: 1) Read playside A/B gap; 2) Cutback to backside A gap; 3) bounce outside on the playside.

So running away from jet motion will take advantage of LBs flowing with the jet motion and often times provides a natural cut back as the LB to the jet sweep tries to gain outside leverage. 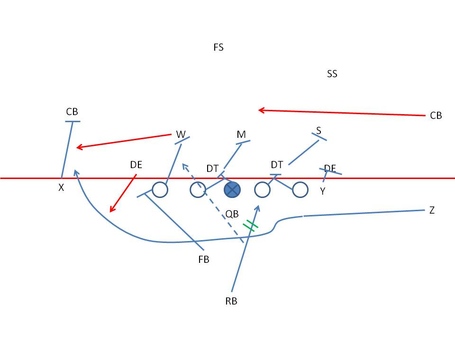 Running the jet sweep to the same side still sucks up the backside LBs rather than allowing them to flow in run support. Still, it takes a LB out of the play and makes the bounce back even more threatening as the defense rolls with the jet motion. 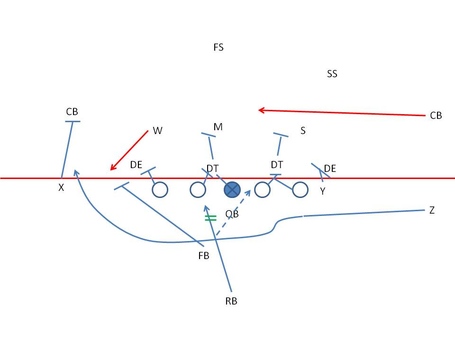 Here's a video of Wisconsin running a jet sweep with an inside zone away from the jet sweep motion.

Jet Sweep Fake - Counter Trey
So now you've forced the defense to flow both outside and upfield to protect against the jet sweep and the inside zone. Particularly when the inside zone looks to be going in the same direction as the jet sweep motion, it really pulls the defense in that direction and upfield. This really allows a defense to fairly easily get outside leverage and seal them inside as they get caught in the wash. 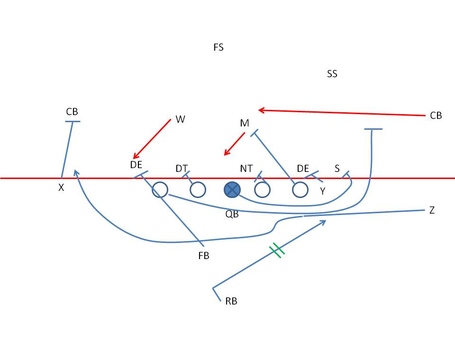 This almost works similar to a reverse, in that you are heavily selling one direction and then getting outside on the back end. As defenses roll their coverage toward the jet motion and get sucked up to the initial movement, MSU opens a big running lane on the backside.

MSU uses counter trey action this play (on the above blocking the playside TE and playside OT would actually double the DE to the backside backer - this is the "trey" block in "counter trey"). Note here that the first puller would prefer to seal the EMOL inside, but if he gains too much depth he will simply kick that defender and the RB will run off his butt.

Jet Sweep - Run Play Action
Michigan State has been running variants of this from shotgun simply because the footwork is easier for Cook (it also gives him a peak of the defensive backfield). But there is little that prevents this from being run under center and with the same backfield action to carry the defense out of coverage. 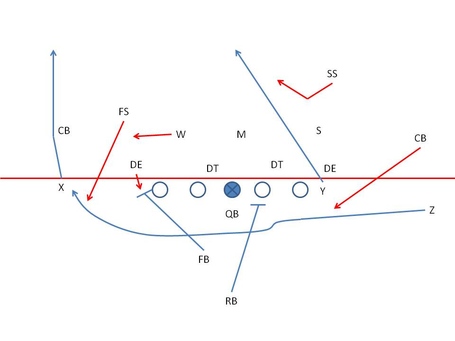 Defenses start bring safeties up when they see the jet motion or blitzing off the back end with the CB and now you attack them over the top.

This video is a bit of a variant, mind you. It's off an end around look where the RB fake is first, but that's only because of the shotgun look and the fact that they are trying to run inside zone to the backside of the jet motion (if you ran jet sweep with that, the two players would run into each other, though you could jet sweep and run inside zone to the same side).

Conclusion
So out of this jet sweep package, MSU can quickly attack the edge. When defenses start trying to gain leverage on the outside, Michigan State can also run a quick hit interior run game more effectively by drawing those defenders outside of the tackles. As defenses start rolling the defense and bringing extra defenders to the play, they can get out-flanked on the back end with the counter look. Lastly, as defenses try to attack off both edges or bring both safeties down in run support, then the play action can be used to attack them over the top. For defenses that are very athletic but tend to be undisciplined, especially with their eyes and with their flow, this package can lead to some big gains for the Spartans.

Aside
I apologize for not being able to show more video here. The source I've used in the past for this has been lost and so I no longer have access to the video.