Conversing with the Enemy: Dylan from UMHoops on Michigan-Michigan State

Talkin' turkey with our favorite Wolverine

Share All sharing options for: Conversing with the Enemy: Dylan from UMHoops on Michigan-Michigan State

Dylan Burkhardt and I both began blogging about our respective basketball teams late in 2007. Clearly, all those hours spent in front of a computer have been culminating toward 9:00 tonight, as Michigan and Michigan State enter a game against each other both ranked in the top ten for the first time since . . . EVER. (What, you've already heard that factoid 50 times? Tough.) As is our tradition, he and I exchanged questions and answers about our teams going into the big game. My answers to his questions are up at UMHoops. Below, I'm in bold.

1. Despite losing two of their last three games, Michigan remains right in the conversation for the best team in the country. How big a surprise has the team's dominance been? What's the buzz level around the program like?

Everyone knew this team was going to be good but I'm not sure anyone expected it to be this good. Trey Burke has been the All-American caliber point guard that everyone has expected while Glenn Robinson III, Nik Stauskas, and their freshmen teammates have exceeded any and all reasonable expectations.

Michigan State fans don't need any education about the lean years of Michigan basketball over the past decade, so having a team this good has been a boost to the program. Add in the renovated Crisler Center and William Davidson Player Development Center and it's hard for Michigan fans to be anything other than giddy about the direction of the program.

Michigan has won three of the last four against Michigan State but this game feels extra important. A win when both teams are "up" for really the first time ever would be meaningful for the rivalry but also in the scheme of the Big Ten regular season crown. Michigan needs this game and comes in without its starting center and in the middle of a stretch where frankly it has looked vulnerable.

2. On paper, Michigan looks nearly impossible to defend on offense, with four explosive perimeter players who can score both from beyond the arc and going toward the basket--and an emerging Mitch McGary giving the team points in the paint. And nobody turns the ball over with any kind of frequency (14.6% team TO%). In the team's losses, what's been the key for opponents in limiting Michigan's scoring efficiency?

The way to stop Michigan is to cut the attack off at the head. No one has truly "stopped" Trey Burke--he's scored at least 15 points in every Big Ten game--but taking him out of his game unhinges the Wolverines.

Burke's bread and butter is the high pick and roll which is hard to guard because he's so versatile. If defenders go under screens, Burke is a very good shooter off of the dribble with range out to three point range. If Burke gets into the lane, he has a pair of finishers in Glenn Robinson III (at the rim) and Nik Stauskas (on the wing).

Robinson and Stauskas are great players but they feed off of Burke's ability to create. The approach to defending Michigan has to be turning Burke into a scorer rather than a distributor - and then hope he misses his shots. Turning him into a scorer can obviously backfire as he makes 54% of his twos and 37% of his threes, but there's not really a better approach to take.

3. Michigan's big five (the four season-long starters plus McGary) are pretty familiar to Big Ten basketball fans, but John Beilein has been using up to 9 players in recent games. Assuming Jordan Morgan can't go again Tuesday night, which of the "other guys" is most likely to make a key contribution for the team?

Jon Horford has started recent games at the five position but he's been badly outplayed by Mitch McGary--who won the Big Ten Freshman of the Week with averages of 13 points, 7 rebounds and 3.5 steals per game last week--of late. McGary has set a career high in minutes each of the last three games, most recently with 32 in overtime at Wisconsin, and could play 30 once again if Jordan Morgan is out.

Beyond that, Michigan's bench has been quiet of late. Freshmen Spike Albrecht and Caris LeVert have backed up the one and two positions respectively but some of their surprising early success has tapered off.

Beilein called on 6-foot-7, 245 pound Max Bielfeldt to provide some physical play down low but while he's strong, he's also somewhat limited by his height down low. Given Robinson's recent slide in production and Morgan's injury, I would say Bielfeldt could be the most likely to play major minutes to counteract Michigan State's size and strength in the front court.

4. Michigan's defense hasn't been dominant this year, but it has improved substantially both in grabbing defensive rebounds (73.5 DefReb%) and avoiding fouls (21.0% FTR). What (or who) have been the biggest factors in those improvements?

John Beilein's teams have always done a good job of avoiding fouls and this year is no different. However, Beilein's teams have rarely if ever rebounded like this bunch. The increased size and athleticism of Mitch McGary and Glenn Robinson III respectively has made a huge difference. For all of the good things that Zack Novak brought to the table, it is nearly impossible to be an imposing rebounding team with a 6-foot-4 power forward. Robinson is still in that undersized mold at 6-foot-6 but he's an elite level athlete.

Jordan Morgan has steadily improved as a rebounded on both ends while Mitch McGary has been a dominant rebounder on both ends, ranking 10th nationally on the offensive glass and 44th as a defensive rebounder.

Obviously it doesn't mean anything until both teams play but it's a bit shocking to look at both teams' Ken Pomeroy profiles and see that Michigan is actually regarded as a better (sometimes only slightly) rebounding team on both ends of the floor than Michigan State. I'm not sure I every envisioned that happening while John Beilein and Tom Izzo were in charge of their respective programs.

5. While MSU's starting lineup has shown it can go toe to toe with anyone's, perhaps the only clear advantage MSU has on paper over Michigan is at the center spot where Derrick Nix' decision making in the low post has continued to improve of late (17 assists and 8 turnovers in his last 7 games). How well has Michigan defended the post this season? Do you expect John Beilein to double team Nix?

This is a valid concern--especially without Jordan Morgan. Mitch McGary is a disruptive defender--great at hedging ball screens, forcing turnovers and wreaking havoc--but he's not the most disciplined post defender once he's man-to-man on the low block. Jon Horford has shown shot blocking ability but doesn't look like someone Michigan can rely on for long stretches either.

Double teaming has been something of a problem for Michigan. Both Indiana and Ohio State picked Michigan apart defensively and the young Michigan roster really struggled in defensive recovery rotations. Throwing two bodies at Deshaun Thomas or Cody Zeller didn't really do Michigan many favors.

I touched on this in my game preview so I'll save some of the surprise, but the numbers say that both Derrick Nix and Adreian Payne are great at passing out of the post and Michigan State capitalizes on those opportunities. Given MSU's great three-point shooting in Big Ten play, I would hesitate to double Nix--especially early on. I think Michigan has to at least try to play him straight up, body him up, and hope that he misses some early looks. If Nix scores three or four baskets on the block early, then I think John Beilein's hand will be forced and he has to send a double team.

6. Give us your three key statistical (or non-statistical) indicators to whether Michigan wins or loses Tuesday night.

Shooting is probably the primary indicator for any game but I'll be creative and pick out three other things to watch:

--Nik Stauskas and Glenn Robinson III's production: The efficient scoring freshman duo has struggled recently, especially on the road, and Michigan will need offensive production from both players. Can Stauskas find (and make) open threes and can Robinson find some of the easy baskets that he thrived on early in the season? If not, then it will be hard for Michigan to score consistently.

--Turnovers: Michigan State has the tendency to turn the ball over and while Michigan isn't great at forcing turnovers, the Wolverines are extremely efficient in transition. Turnovers (and clean defensive rebounds) lead to the sort of easy baskets that enable this Michigan team to start playing confident basketball.

--Rebounding: The numbers actually say that Michigan is a better rebounding team than Michigan State but I need to see it to believe it in East Lansing. Michigan State has dominated the glass in the last five meetings and won't want to stop that streak. 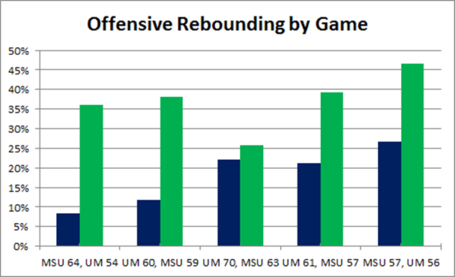 Like the turnovers, strong defensive rebounding leads to easy baskets for Michigan, so the importance of the defensive statistic is magnified on the offensive end of the floor.

Thanks to Dylan for taking the time to answer my questions. Be sure to check out UMHoops as you're trying to kill the day off today. Oh, and may his team fail horrifically tonight.