So the last few games have gone pretty well, eh? The biggest factor driving Michigan State's resurgence (surgence? Did they surge a first time?) has been the starting lineup going all Voltron on everybody, with each of the five players going major minutes and scoring points when the defense gives up something in their particular area of skill. MSU has climbed up to #10 in the KenPom rankings on the strength of greatly improved efficiency on both sides of the ball.

You gotta have an "unsung hero" award, though, right? And that guy has been Denzel Valentine. Over the last four games--going back to the Illinois game, in which Travis Trice was knocked out by another head injury--Valentine is averaging 7.8 points (on a 65.8% eFG%), 2.5 assists, and 1.8 turnovers in 22.0 minutes per game.

Those numbers aren't off the chart, but they indicate Valentine is finally finding the sweet spot in terms of his role with the team. Chart: 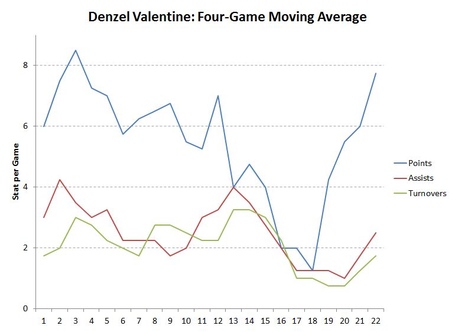 Through the first 16 games of the season, Valentine was making a lot of head turning plays (5.9 points and 4.3 assists per game), but he was also turning the ball over in bunches (2.5 turnovers). This didn't go over super well with his head coach. Valentine proceeded to dial things back over the next 6 games, averaging just 1.0 turnover per game, but also a mere 1.6 points and 1.2 assists (in somewhat reduced playing time).

In this past 4-game stretch, Valentine has been able to dial things back up in terms of offensive aggressiveness without a huge uptick in turnovers (and some of the uptick that does show up above should be attributed to having to play the point with Trice out). Valentine's court vision makes MSU's offensive attack less predictable and has been particularly useful as MSU has gotten the ball into the post more frequently and then rotated the ball around the perimeter on kickouts when the defense doubles down.

While he's coughed it up a couple times, he's also been much better bringing the ball up the court against pressure than I would have predicted. (I also like Izzo occasionally mixing it up with Appling out by having Gary Harris bring it up, given his excellent dribbling skills.) Meanwhile, Valentine is tied for third among major MSU contributors in defensive rebounding percentage, and his defense has been quite satisfactory.

Four games isn't a huge sample, but, by both statistical and eye test standards, Valentine appears to have turned the corner. With Trice's status likely to remain a big question mark, he'll need to keep up his recent pattern of play to give Tom Izzo a reliable sixth man and backup primary ball-handler down the stretch in what shapes up to be a very exciting--and stress-inducing--conclusion to the Big Ten regular season.