MSU's five starters are winning games by sharing the load

This Michigan State basketball team is relying on its starters as heavily as any Tom Izzo has ever coached. And it's worked, as the team has won 11 of its first 13 conference games heading into tomorrow night's first ever match-up of two top five teams in East Lansing.

Yet the starters are strangely unfeatured on the conference statistics leader board. In conference play, MSU's highest ranked scorer (Gary Harris) ranks just 14th in the conference. And the only other player to rank in the top five in any of the major per-game-average categories (assists, offensive rebounds, defensive rebounds, steals, and blocks) is Branden Dawson, who's tied for fifth in steals per game.

Somehow, this team is winning games in bunches despite not having either substantial depth or a conference player of the year contender. Instead, the team has a balanced starting lineup--and not much else. Beyond the five starters, Izzo is basically down to one versatile perimeter player and two post players who are increasingly competent but not really difference makers. That's effectively a seven-man rotation.

As Tim pointed out on Twitter last night, the starters are sharing the offensive workload pretty evenly: 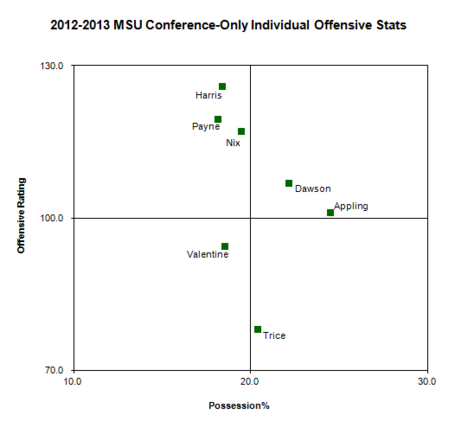 Keith Appling and Branden Dawson are somewhat more assertive on offense than the other starters, but not dramatically so. Appling, of course, takes more low percentage shots late in the shot clock. Neither player has been super efficient, although an offensive rating of 100 isn't terrible when you're working with conference-only data.

Meanwhile, Gary Harris, Derrick Nix, and Adreian Payne are all playing with extreme efficiency on offense, even while each consuming nearly a fifth of the team's offensive possessions. Harris being as phenomenal as he has been as a freshman (53.0% on threes in Big Ten play) and Nix and Payne making big leaps from last year--both in terms of playing time and efficiency--have made the difference.

As soon as the defense keys on an given player, the other players have found ways to take advantage.

(The scatterplot excludes the other three bench guys, who are all very low usage players on offense, with highly-varying levels of success. Offensive ratings: Byrd 53.3, Gauna 86.1, Costello 142.6. #FreeMattCostello.)

Looking at the per-game statistical numbers in conference play:

No one's doing a lot of any one thing. But everyone is doing some of several things.

The starters will be severely tested tomorrow night by an Indiana team that boasts even more scoring balance (six players averaging at least 8 points per game in conference play). But MSU's new starter-centric formula has vaulted the team all the way into the top five teams in the nation now. We'll see how much further it can take them.