The state of the MSU basketball team is still okeedokee for the most part, but Keith Appling's recent slump is cause for worry

Tom Izzo isn't panicking. And he's quite right not to. Since the Immaculate Beatdown, Michigan State has:

--Beaten a lower-level Big Ten team on the road by 9 points in a less-than-dominant-but-never-really-in-doubt fashion.

--Slightly outplayed the #1 team in the country at home through 38 minutes, before getting outplayed and losing in the final two minutes.

--Lost by 8 points to a ranked team on the road.

That's nothing to write home about, but it's also nothing to panic about. MSU is roughly the 10th best team in the country. Those are disappointing-but-reasonable results for the 10th best team in the country. And the team continues to demonstrate it can play with anyone, anywhere. This is the part of the schedule we all looked askance at when the schedule was first released.

In terms of individual players, some major pieces are still clicking. In particular, the team's co-#1 scorer (Gary Harris) has posted an individual offensive rating of 110+ in 9 straight games, and the team's first option in the halfcourt offense (Derrick Nix) has done the same in 8 straight games (and 11 of 12). Adreian Payne and Branden Dawson have been less consistent, but Payne has been outright dominant at times. Denzel Valentine is emerging as a consummate glue guy (6.4 rebounds and 3.0 assists per game over the last 5 games), and Travis Trice is getting healthier.

The defensive issues are perhaps a tad more perplexing, but Indiana is Indiana and the Ohio State role players came up fairly big as MSU mostly shut down DeShaun Thomas. (If you're going to point at one issue, it's that MSU's aggressiveness on defense isn't paying off as much. The last three opponents have all posted turnover percentages of 15% or better.)

Overall, this is not a portrait of panic.

Now, the guy I haven't covered yet is Keith Appling. And there is some reason for concern there. Charted: 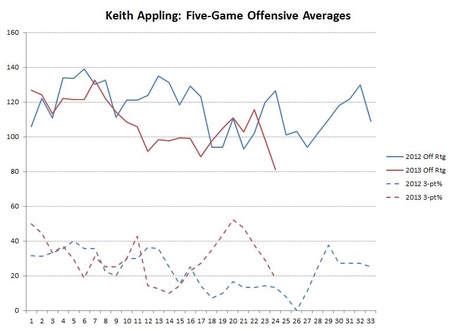 This season's trendlines look a little too much like last season's. Appling has gone into a shooting slump and it's affecting the rest of his game. As much as the "score-first point guard" angle can be overplayed, Appling does need his jumpshot to be falling to make the rest of it work. He's a guy who can make shots from some very tough angles, but also a guy who doesn't have the most consistent release when he's squared up.

Appling's overall offensive numbers are actually falling harder this year than they did last year. Over the last four games, he's shooting just 35.0% on 2-pointers, 10.5% on 3-pointers, and 66.7% at the line. And he's averaging only 2.0 assists, vs. 2.8 turnovers, per game during that span. His defense was also suspect against Aaron Craft--although there were larger issues there (Harris got beat by Craft a couple times, too).

Last year, Appling was able to adjust and make a lot offensive plays in the conference and NCAA Tournaments, partly because his some of his jumpshots started falling and partly because he adapted his game. There's still plenty of time for Appling to right the ship this season--although the Gophers' upset of Indiana ratchets up the pressure for Sunday's game. (Since I typed the first draft of this post, the position of our friends in Ann Arbor in the conference race shifted downward a notch and a half, but the renewed level of importance of the game to MSU remains unchanged.) And Valentine's emergence and Trice's return to the court should allow Tom Izzo to lessen Appling's playing time burden some--as he did in the second half against Ohio State, when MSU still managed to get back into the game late.

So don't panic. But do worry. And continue to believe. Simple enough?

Oh, and a close loss on Sunday won't change any of this fundamentally. Michigan's still going to be a home favorite (KenPom says 69-65). But a win could quite nicely put all this in the rearview mirror. #BeatMichigan