The Hurry Up: Killiam Gholston

The only thing that would make this blitz scarier is two Will Gholstons.

Share All sharing options for: The Hurry Up: Killiam Gholston

Back in 2009 and 2010 for many fans it was when, not if, MSU was going to switch to a 3-4 defense. "Gordon-Jones-Gainer-Gholston" some offered. "Imagine Norman-Bullough-Thomas-Gholston in 2011" others said.

Well, so much for that ever happening, but, hey, WHAT'S GOING ON HERE: 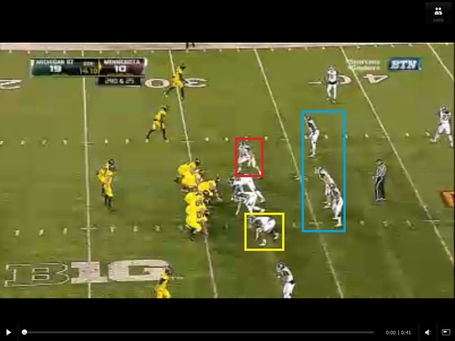 At first glance, nothing too out of the ordinary is happening. The linebackers (in blue) are reacting in their standard manner to a 3 wide receiver spread, aligning Norman over the slot receiver and Allen over the tight end. You'll quickly see though, that both DEs are a yard off the line of scrimmage, with Gholston (in yellow) angled sharply and Rush (in red) standing up. Still, I don't see what the- 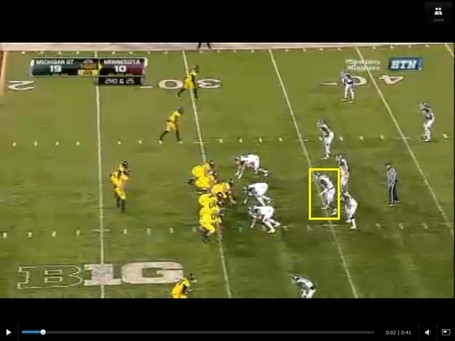 Gholston has rolled off of the line of scrimmage into the middle of the field. Rush put his hand down, and the line has shifted over into a three man front. That means: 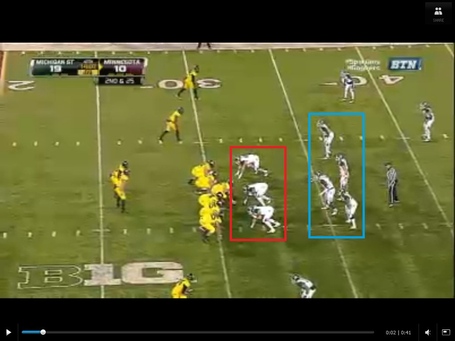 BAH GAWD, IT'S A 3-4! Norman-Bullough-Gholston-Allen. The prophecy has come to pass! 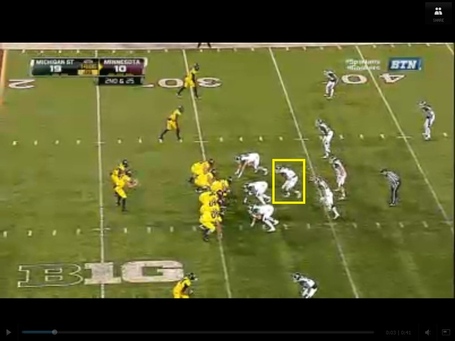 And now Gholston is creeping up towards the line of scrimmage and Allen is following behind him and where have I seen this before- NO. YES! IT'S DOUBLE A-GAPS BECAUSE PAT NARDUZZI USED TO HAVE SOME FUCKS LAYING AROUND BUT HE LOST THEM SOMEWHERE IN THE 15 YARDS BETWEEN 2ND AND 10 AND 2ND AND 25. 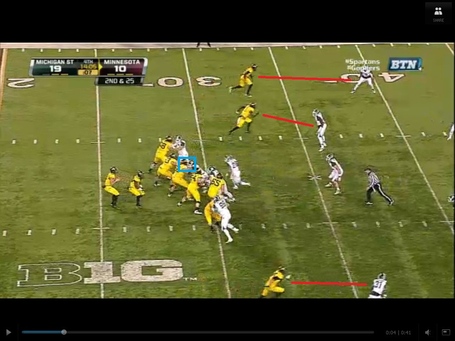 Loves him that blitz. Gholston (whose head is in the blue box) slams into the center around the 29 yard line. This is only a five man blitz by MSU and with Minnesota having seven blockers you might not expect much pressure here. You can see the three receivers (running three-verts) are fairly locked up, with both safeties still lying deep. Bullough looms for the running back, or the QB if Nelson tries to take off and run. 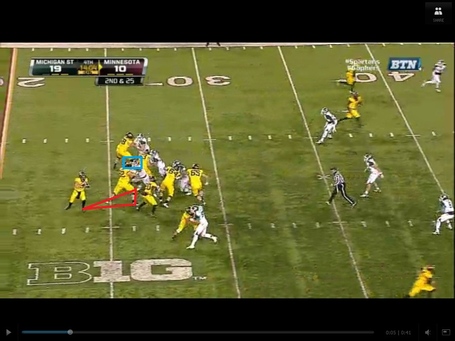 Near the bottom-right corner of the screen you can see Isaiah Lewis stepping down in his 'Robber' role to help cover the short zones or jump a short route.

Gholston has pushed his man about four yards deep now, past the RB, past the tackles, and closer to the QB. The rest of the Gopher pass protection is holding up, but this offensive center is absolutely on ice skates.

William Gholston, as much of a hater of Euclid as anyone, understands that scalene triangles are BULLCRAP. So he makes his best effort to equilateral-lize the situation. 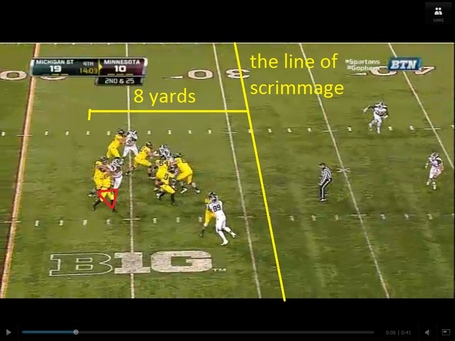 Much better. The QB hasn't moved forward, Gholston has just shoved the center backwards two more yards, because when Gholston needs to get to the QB, he knows the chillest way is to move his blocker all the way back to the quarterback, then simply turn 90 degrees, and apply pressure.

Nelson would probably be smart to tuck the ball and run for four or so yards, but his brain is understandably sending him urgent signals about the 280 lb man about to crush him, so instead he is just gonna chuck this ball as far as he can and hope for the best (I believe the kids call this 'Robinsoning'). 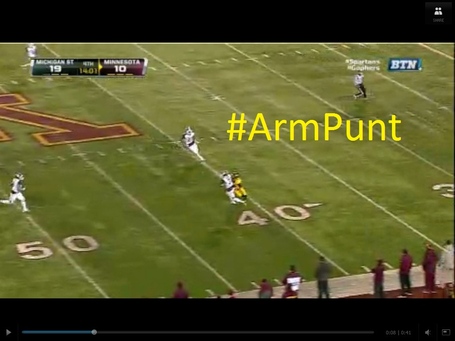 Haw-haw. Darqueze Dennard, who had his man covered stride for stride, steps in front of this pass and picks it off.

You want the third video down on this page, titled 'Darqueze Dennard picks off Philip Nelson:'

I had the video embedded, but it kept auto-playing when you opened the article, which isn't ideal. If I can find a way to get it to stop doing that, I'll re-embed it.

-I keep seeing projections for Gholston to fall to the 3rd or 4th round, but man, he is pretty big, and pretty strong, and pretty fast, and in addition to a highly productive career, he also sometimes does stuff like this. Once the 40th pick or so rolls around, I don't know if you could convince me of many better 'upside picks'. We'll see how long he lasts.

-James Kittredge (#99) gets slid out to DE on this play. He does not handle the transition as well as Gholston, getting stoned thoroughly by the Gopher right tackle.

-As per usual, the MSU cornerbacks really make this blitz work by playing great coverage and even cap the play off with a turnover. Everyone give a little fist pump that Dennard is coming back. Do it.

So given the success of this play, will we see Calhoun-Bullough-Elsworth-Allen next year in the long awaited switch to a base 3-4 defense? LOL, absolutely not. But maybe some play, when the opponent is facing a 2nd and 18... A man can dream...

Author's note: 'The Hurry Up' is an attempt to write some X's and O's pieces that focus on just a single play in an effort to post more regularly, and also be able to talk about plays that don't necessarily require a longer 'better know a...' post. At some point, it is likely that these will either mutate out of control in terms of word count, or I'll get lazy and not write them, but I'm going to try and do these as often as I can, and keep them under/around a thousand words. Cool.