I'm on record as being quite worried about how Michigan State matches up with Duke. I think Derrick Nix will struggle to score consistently against a defender like Mason Plumlee. He may be able to get decent position on Plumlee, but he's going to have a hard time over a 6'10" defender with good athleticism. (Going the other direction, hopefully Plumlee will struggle to score in the post, as well. He was just 4 for 7 from the field against Creighton's 6'9", 260-pound Gregory Echenique on Sunday, as he was unable to get position near the lane.)

At the 4-spot, Adreian Payne is really going to have to scramble to keep track of Ryan Kelly off pick-and-pop situations and other defensive rotations. Kelly isn't quite as dangerous as DeShaun Thomas, but he's the same kind of match-up for Payne. (Kelly is in something of a slump, though. Since his big 7-9 three-point shooting display against Miami in his first game back from a foot injury, he's shot just 2-17 from beyond the arc--with zero makes in his last 4 games. Still, Kelly is a 47% shooter from deep for the season.)

The good news is that, while Duke has two tough match-ups in the post spots, MSU should have a substantial physical advantage across the full starting lineup. While the Blue Devils outrank the Spartans, #18 vs. #75, in effective height (which only accounts for the 4- and 5-spots), MSU has the advantage, #60 to #110, in average height (which covers all five spots). Among its assortment of talented offensive guards, Duke doesn't have an obvious counter to the 6'6", 230-pound Branden Dawson, and Gary Harris should have a size advantage, too.

This has not been a vintage Tom Izzo team in terms of dominating the glass on either end, but MSU does rank in the low 40's nationally in both offensive and defensive rebounding percentage. And the rebounding has been much better of late, particularly on the offensive end. The promised-in-the-headline chart: 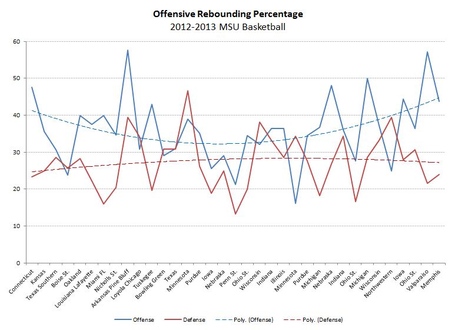 MSU has posted an offensive rebounding percentage of 40% or better in 5 of its last 10 games. Adreian Payne has been the biggest factor there, grabbing 5-plus rebounds on the offensive end in 5 games during that stretch (not the same 5 games, incidentally). I think you can chalk some of that up to Payne, and the rest of the team, finally adjusting to the bigger lineup (and shorter bench) Izzo put in place after Brandan Kearney's transfer.

Given the amount of talent that will be out on the court Friday night, there will certainly be a multitude of factors that play into the game's outcome. But if MSU can grab an extra 5-10 scoring opportunities by dominating the glass on both ends of the court, that would go a long ways toward advancing to the Elite Eight.

Attention, members of the national media: While MSU may not be running the War Drill this week, we'll allow the associated narrative.