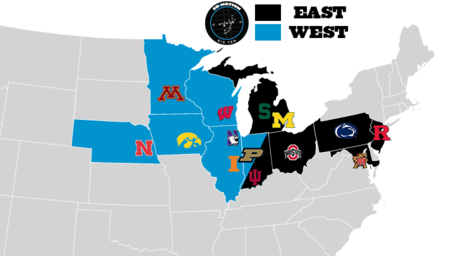 (via Land-Grant Holy Land. You could have switched MSU and Purdue and it would look fine)

The conference will go to nine B1G games in 2016, meaning MSU will have to drop one of Alabama, Notre Dame, Eastern Michigan or Furman off the schedule. Notre Dame would actually fit better to drop than Alabama, because East teams will have five conference home games in even-numbered years. We'll see where that goes.

Over a four-year period, every team will play every other team in the conference. That's nice.

These comments from Jim Delany were interesting.

Asked Jim Delany about moving Michigan State to west vs. Purdue. Said MSU in their view is a 3 seed, Purdue is a 4 seed …

"Moving a 3 seed over wasn't really going to be the answer to competitive balance." May have effect, depends on how teams do in next decade

Over the past 15 years, MSU and Purdue are probably pretty even. But will it be that way moving forward? I tend to think no.

But if MSU isn't viewed favorably by the conference, what does that say about this?

That would theoretically make MSU's cross-division slate more favorable than, say, Ohio State. Though it probably depends on how MSU does in the next few years.

Anyway, we've displayed our thoughts on this before. I think the divisions are very unbalanced, and it sucks for MSU to "lose" Chicago and the Wisconsin game. But with the Red Wings moving into the East, it all fits.