If you haven't seen, Texas A&M will be doing some unreal renovations on Kyle Field, which will expand the capacity to more than 100,000 and make it the largest in the SEC. I mean, look at this:

The Auburn SB Nation blog, College and Magnolia, threw out the question to its readers what they would renovate at their stadium, so I figured I'd ask it here.

What about Spartan Stadium? The stadium just added the most total video screen area in the nation, and the north end zone will be renovated this summer and over the next year (board approval expected in June) to add a recruiting room, media rooms, new locker rooms and fan amenities (concessions, restrooms). Speaking as someone who has attended plenty of post-game press conferences, having them in trailers outside the area always felt so cheap for a major college program. This seemingly-little addition will go a long way in the perception of the program. The gas station on the east side is also starting to be removed. 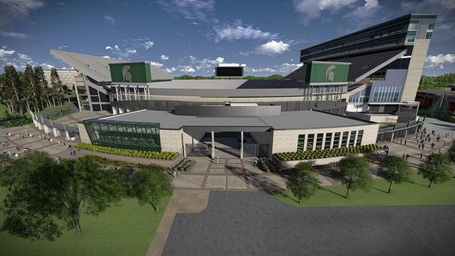 What after that? Note that there are no publicly-known plans for the next step, and whatever it is would cost a lot of money that MSU doesn't have yet, but what's most important for you?

Possibilities include club seats on the east side and/or covering the east side in brick like the west side. I don't think there's any need to greatly expand seating. It would also be hard to build it over the scoreboards. But maybe some of you think otherwise?

With the west end zone press box and club seats, the new scoreboards, the sight-lines and the picturesque location in the center of campus, I personally think Spartan Stadium is one of the more underrated college football stadiums in the country. It's 90 years old and actually older than Michigan Stadium. But when the building is used seven times a year, how crazy do you get with renovations?

Just for fun, what would you like to see added?