Spartan fans have seen this before.

Share All sharing options for: Playoff Time is Draymond Time

I need my beauty sleep, so I didn't seen that much of Golden State's first round playoff series against Denver, but I've caught up on Draymond Green's exploits via Twitter each morning. I can't help but notice the parallels between Green's first-year seasons at both the college and professional levels: 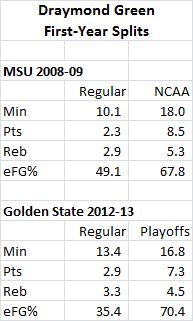 In both cases, he's gone from being an occasional option off the bench in the regular season to being a significant contributor at key moments in the postseason. The contributions he's making in the playoffs as pro are a little more shocking, though, given that he hadn't been all that efficient in the regular season for the Warriors, whereas he had been quite efficient for MSU during his freshman regular season in limited minutes.

After shooting just 20.9% on 3-pointers during the regular season this year, he's made 6 of 12 attempts from beyond the arc in the playoffs. He went for 16 and 10 in last night's series-clinching win.