With the recent announcement that the Big Ten would be adding men's and women's lacrosse and that Johns Hopkins is joining the conference for men's lacrosse, I've received a lot of questions about if MSU would move up to D1 in lacrosse.

Quite simply, I can't see it anytime soon.

The biggest issue with adding a sport is that you need to add two sports because of Title IX, and that costs a lot of money. Men's and women's athletics money needs to be about equal. The reason schools have more women's sports is because football uses so many scholarships. So if MSU were to add men's lacrosse, it would probably have to add women's. (If you're going to complain about women's sports in the comments, save it. That's not the point of this).

It looks like MSU dropped varsity men's lacrosse in 1997. A reader tells me it was replaced by women's crew. (More details in the comments below)

Currently, MSU has a really good men's club lacrosse team, and the women's team is decent. Michigan also had this, but because they make an ungodly amount of money through donations, they had the resources to recently move up to D1. MSU is one of a handful of athletic departments that doesn't lose money, thanks to some great work by Mark Hollis over the past few years. It isn't going to add a sport just to go back into the red.

First question of Hollis is about adding lacrosse. Says he would love to, won't add a sport at expense of others.

MSU has 25 varsity sports, which is near the top of the conference. Meanwhile, they're in the middle in terms of revenue. Hollis has done an incredible job of cutting expenses while not cutting sports, which several schools have been forced to do. The amount of sports is a quiet way of judging an athletic department's strength. One reason SEC schools can pay more for football coaches is because they have fewer sports to pay for.

The images below are from MSU's ChampionshipsBuiltOnMemberships.com page. Note the number of sports at some top football schools. 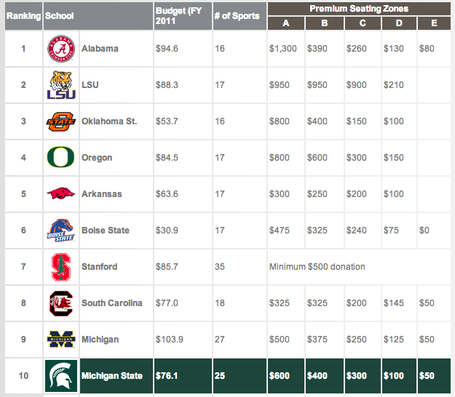 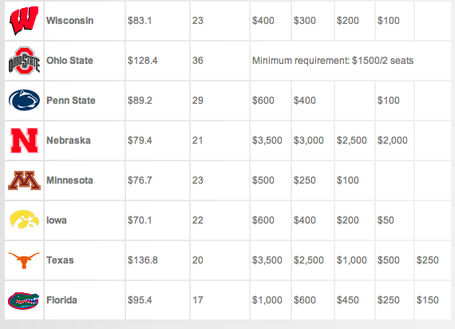 Unless MSU gets some big donations, like U-M did, I can't see MSU moving lacrosse up to Division 1 anytime soon. But MSU's athletic department has still been doing a great job.

Also, the Big Ten has sole ownership of this joke, now.