Which states have been good to Michigan State football? Where has the staff been under-performing? A look at the Dantonio era.

Share All sharing options for: Dantonio's Recruiting Map- A State by State Look 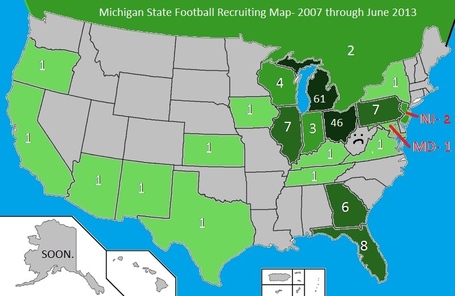 *The darker the green, the more recruits came from there. The red lettering for New Jersey and Maryland was mostly an aesthetic choice, but also because those states' landmasses are too dang small.

**Yes, I colored in all of Canada and not just the province where the 2 MSU recruits came from because 'merica (also, the map didn't delineate provinces).

-Michigan State under Dantonio has recruited at least 1 player from 21 different states and 1 Canadian province (Ontario).

-Ohio has been responsible for about 3 out of every 10 scholarship players under Dantonio.

-No other state breaks 10% of MSU's recruiting class over these eight years, but on average Florida, Illinois, Pennsylvania, and Georgia have each provided about a player a year to Michigan State.

-Michigan State has primarily operated out of two spheres of influence: The lesser sphere is Georgia and Florida, the two most South-Eastern states in the country (S-E-C! S-E-C! S-E-C!), whereas the greater sphere, as you might expect, is Michigan itself; the three states Michigan actually touches (Wisconsin, Indiana, Ohio); The closest province of Canada (Ontario), and the two big states that touch the edges of our contiguous Mid-Western sphere (Pennsylvania and Illinois).

-Illinois and Indiana have to be considered states where MSU has strongly underwhelmed over the years. Illinois seems to be opening up, in large part to the recruiting upgrade Ron Burton has provided over Dan Roushar, some helpful MSU legacy connections, and in-roads into the Chicago-based training organization 'Core 6'. Indiana, on the other hand, remains a tough nut to crack.

-From the middle of the Eastern seaboard to Iowa, Michigan State has pulled a recruit from every single state except for North Carolina and...

-Aw man, West Virginia. Don- Don't cry. It's not your fault scouts and coaches find it impossible to hack their way through your dense, mountainous, forests teeming with marijuana fields, moonshine distilleries, bear traps (sometimes the spring-loaded metal jaws, sometimes just an actual pit with a live bear in it), armed rebels, and burning couches to actually locate, watch, and offer any of your football players (see: just three players that Rivals gave 3 stars in the last four years, no 4 or 5 stars).

Your state produced Randy Moss which we love you for, and is more than most of the U.S. can say, and could possibly be producing a Randy Moss or five every year, except as we mentioned, you are effectively the Ocean of the United States in that we have no idea what goes on in 95% of you.

You also gave us Rich Rod, and for that we really do need to emphasize again that we love you.

-You wouldn't think MSU would be looking to break into Alaska, but then, you've never seen a Grizzly Bear play offensive guard, have you? Fantastic pad level, they play with a mean streak, and they're really willing to maul a defender. There are concerns about whether their arms are long enough to play tackle, but you take the good with the bad. And for you sticklers out there, I'll have you know there's nothing in the rule book that says a 700 pound bear can't play football.

Conclusion:
We can see that though MSU has plucked a player here and a player there from all over the country over the years, the vast majority of players have come from MSU's home state of Michigan and Dantonio's home state (and the state where he made his career) in Ohio.
As MSU has faced perceived difficulties in these two states recently, is there significant reason to be worried? And is there anything this data can tell us about the staff's response to these challenges? Both good questions, that we'll look at in tomorrow's part II post.
Final note: Did I try really hard not to make any embarrassing basic geographic or mathematical errors? Yup. Is it possible that I still made them anyways? Ohoho, buddy, you'd better believe it. So if you find a mistake, point it out to me with the minimum of derisive laughter. Thx.