Share All sharing options for: Keeping It Real with NCAA 14 Player Ratings

Again, sorry Denard has to be on here. Again,

For part two of our thoughts on EA Sports "Keeping it real" with NCAA 14, we needed to select a reader and get their thoughts. Part one was my thoughts on the Big Ten ratings.

I asked MSUDersh to give me some sentences on the top MSU player ratings. He replied with an essay. But that's good! I was going to add my comments, but he sums up everything I had to say. So I'll let him take the rest of this. 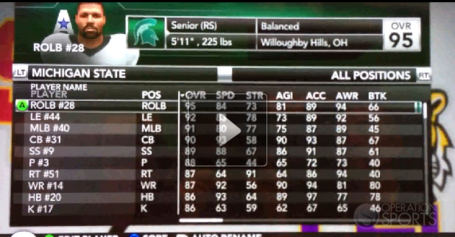 1) ROLB #28, AKA sr. Denicos Allen - I'm not surprised that a LB is our top player though I am a little surprised by the LB that EA Sports chose. Nonetheless Allen is poised for a huge senior season which will be his third as the starting SAM (strongside) LB. EA likes his speed and on field awareness, both of which helped him get his famous "Superman" sack of Joe Bauserman in 2011. Let's hope we see more of that on the field & in the video game this year.

2) LE # 44, AKA rs jr. Marcus Rush - No shock to see Rush as our top rated DL, he's been an impact player since his first snap and has started every game in his career. His numbers suffered last year, I think due to Worthy not taking two blockers every game and also the opponents being more aware of him, but I expect him to have another big season this year.

3) MLB # 40, AKA sr Max Bullough - The man who was literally born and bred to play MLB at MSU, Bullough has lived up to the family name and earned himself a second selection as captain by his teammates and accolades as high as 2nd team pre-season All American by ESPN. Personally I think he should be our top rated player but EA seems to have his measurables low, they only rate him above an 80 on acceleration & awareness. He will likely pass his father this season on MSU's all time tackles list (Shane is #17 overall) but will need to channel 2009 Greg Jones if he's going to match his uncle Chuck who is #6 in tackles at MSU.

4) CB # 31, AKA sr Darqueze Dennard - Another great player defensive backfield player under Dantonio, Dennard looks to be the man on an island shutting down opponent's top WR this season and preventing QBs from throwing in his direction. He's also a great on the ball player as shown by his 3 picks & 7 passes defended last season.

5) SS #9, AKA sr Isaiah Lewis - Like the four players mentioned above, Lewis is entering his third season as starter at his position. He seems to have the most consistently high measurables among the defensive players, EA gave him 4 grades above 85 out of the 5 categories that matter to defenders. He had 80 tackles last season and for a SS, really seems to play all over the field.

6) P #3, AKA jr Mike Sadler - Well at least EA seems to understand MSU's strengths as the top 6 players are all on defense (and yes, punters are defenders). We all know that Sadler is a stud both on the field (first team all-B1G by the coaches last season, first team all-B1G preseason by Phil Steele) and off (4.0 GPA in double major of Applied Engineering Sciences and Supply Chain Management, hilarious twitter feed) so I'm glad ES sports recognizes it as well. He also had a personal foul last season in the Boise game, just to send the message not to mess with our punters.

7) RT # 51, AKA rs sr Fou Fonoti - Fou was our top rated OL going into last season but broke his foot before the ND game and missed the rest of the year, earning a medical RS. Hopefully Fou can bring some experience & stability to the right side of the line. I'm a little surprised that he's our highest rated OL (I think Travis Jackson at center can be all-B1G this year) but hopefully his play will support this rating.

8) WR # 14, AKA rs jr Tony Lippet - This is the biggest surprise to me, as I would put Burbridge, Mumphrey and Fowler all ahead of Lippet. EA loves his speed & acceleration and presumably his size (he's 6'3"), but Lippett hasn't had much career production after bouncing back & forth between offense and defense. He was a stud QB both passing & running in HS, so you can maybe use him as your secret weapon option QB in this game.

9) HB # 20, AKA rs jr Nick Hill - Another listing that I would call a surprise, Hill has mostly made his mark in the return game at MSU - he's #3 in overall KR yards and has a shot at passing Derrick Mason for the career record this season. That being said, he's expected to be low on MSU's RB depth chart this year in real life but someone other than a freshman has to be the #1 guy in the video game.

10) K # 17, AKA rs sr Kevin Muma - Well, Muma was a stud kicker in HS but has only been able to see the field as our kickoff specialist at MSU. He was in the top 20 in all of NCAA football last season in KO distance average and earned a touchback on basically half of his kicks which is very above average. That being said, if our KO specialist is really our 10th best individual player . . .

Overall, MSU is rated highly on D in this game, the team score of 93 is tops in the B1G though I would question our offensive score of 90 (4th in the B1G & only one point behind M & UNL). All in all I like the defensive rankings, as Allen, Rush, Bullough, Dennard, Lewis & Sadler are all studs who have real track records that EA can base it's rankings on so I think they got it right by ranking all of them highly.

I expect Trae Waynes and Shilique Calhoun to have very good seasons in real life but they've hardly seen the field so I understand why EA left them off, but I think Kurtis Drummond has enough on the field accomplishments to make this list. Either way I look forward to checking out this game once I have time to get my hands on it.