Normally, writing one of these things for a returning freshman is pretty straightforward. The rookie displayed one or two real strengths, but a couple major issues in adapting to the college game limited his minutes. You just point to those things and say, "This guy's a real sophomore breakout candidate if he just fixes those things over the summer!"

In the case of Gary Harris, though, there really isn't anything to fix. As a freshman, Harris:

-- Finished second on the team in both minutes played and scoring, averaging 13 points per game.

-- Led the team in offensive rating.

-- Was the most trustworthy Spartan player with the ball in his hands (15.2% turnover rate).

-- Played, by general acclamation, the most consistent defense on the team (including posting the second best steal rate on the team).

It's pretty hard to "break out" from that.

Early in the season, we noted how much more explosive Harris was out of the gate than previous MSU wing players of the Tom Izzo era. Looking at his full season numbers, he really stands out as a unique figure among MSU freshmen in the KenPom era (PORPAG info is here):

The only other freshman over the last decade Izzo has trusted to play anywhere close to the minutes he gave Harris was Kalin Lucas. And, while Harris didn't have to consume quite as many possessions as some other key freshmen have had to, his offensive efficiency was head and shoulders above the rest of this group.

If there's a key for Harris as a sophomore, it's simply this: Stay healthy. After basically missing two games early in the season when his left shoulder popped out in the first minute of the Boise State game, Harris battled issues with both shoulders throughout the season. This pretty clearly affected his game at times. After looking to drive to the rim more aggressively early in the season, Harris drifted outside more regularly toward the middle of the season (not that that was necessarily a bad thing, given this three-point shooting prowess). Harris did regain his confidence in the lane later in the season. 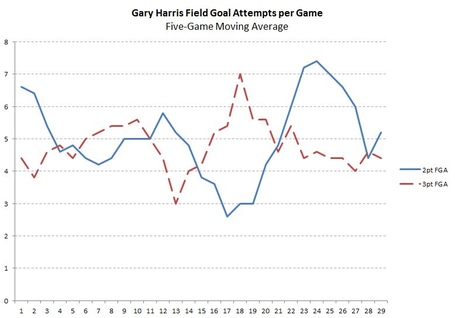 Following the conclusion of the season, Harris and the coaching staff decided rehabbing his shoulder was preferable to undergoing surgery. The report is that he's good to go now, although shoulder injuries have a way of lingering through a player's career. In a worst case scenario, hopefully Harris can fight through any issues with the same toughness he displayed this past season. Harris on the whole thing:

"I'm just the type of person that's going to play through regardless," said Harris, who had offers from Notre Dame, Kentucky, Iowa, Indiana and Purdue to play wide receiver coming out of high school. "I sat out the first two games, but after that I couldn't sit out anymore. I was going to play even if the shoulder fell off. So it feels good to finally get back to 100% healthy and get back to how I used to be."

Avoiding injuries would also potentially make Harris a bigger factor in getting to the free throw line (29.8% free throw rate) and crashing the glass (3.7%/6.2% rebounding percentages)--although the presence of Branden Dawson and Denzel Valentine as guards who rebound well reduces the importance of that skill for Harris. Harris' only other arguable weakness from a statistical standpoint is passing the ball (9.8% assist rate), but it's not like he has shown a tendency to take bad shots instead of passing the ball off to open teammates.

Through one season, Gary Harris has been everything he was billed to be--and more. We will now have the privilege of being able to watch a guy who could have easily been an NBA lottery pick compete on behalf of our college team for another season. He enters his sophomore season as the likely preseason Big Ten Player of the Year and a clear All-American candidate.