Can the MSU point guard take the next step as a senior?

Continuing an annual tradition, Con-T and I will be tag-teaming a series of posts over the next two months reviewing the performance of each returning MSU basketball player this past season and looking ahead at their roles for the upcoming season. First up: Keith Appling.

Entering the 2012-2013 season, the MSU basketball team was, in many ways, supposed to become Keith Appling's team. He was the only returning player who had logged more than 50% of available minutes the previous season, while the team was adding a number of new faces to the playing rotation. Appling did have himself some fine moments: making key plays to win the Kansas game and save the Boise State game early in the season, hounding Trey Burke up and down the court in the Immaculate Beatdown, and continuing his role as Chief Badger Killer (19 points in both wins).

Other moments, however, were not so great. His poor offensive showing (3 points) in Bloomington was a huge killer in an otherwise pretty close game. A month later, he played very poorly during MSU's three-game losing streak to Indiana, Ohio State, and Michigan--missing a key free throw late in the Indiana game and allowing Burke to pick his pocket in Ann Arbor to cost MSU a chance to pull out the win.

Add it all up and the numbers were good, but not great, for his junior season. His usage rate jumped from 20% to 23% as he helped fill the shoes of the departed Draymond Green, while his offensive rating dropped a couple points, from 106.5 to 104.7.

The biggest issue with Appling's game was, for the second season in a row, a mid-conference season shooting slump. Over a 7-game stretch covering the end of the regular season play, Appling made just 5 of 36 three-point attempts. My diagnosis in the midst of that slump:

Appling has gone into a shooting slump and it's affecting the rest of his game. As much as the "score-first point guard" angle can be overplayed, Appling does need his jumpshot to be falling to make the rest of it work. He's a guy who can make shots from some very tough angles, but also a guy who doesn't have the most consistent release when he's squared up.

Appling did rebound in the final four games of the season, making 8 of 16 three-pointers and scoring 15-16 points in three of the games (the other game being the win vs. Memphis, in which the team didn't need his scoring and he was injured).

The simplest diagnosis for Appling is that he needs to play more consistently. From a fan's perspective, he has moments of great glory, followed by stretches of frustration. Let's take a closer look at that using everyone's favorite chart type. 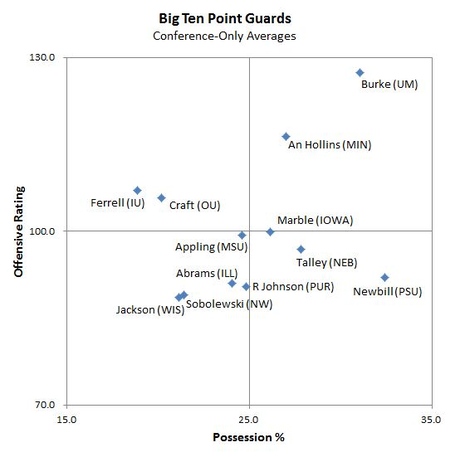 This portrait is a little unfair to Appling since he was quite a big better in nonconference and NCAA Tournament play than in conference play, but it does provide a roughly equalized strength of schedule. Burke was obviously other-worldly, Andre Hollins was quite good, and then Appling was right there in the rest of the pack. Yogi Ferrell and Aaron Craft were more efficient, but also less involved in the offense. Dylan Talley and D.J. Newbill were more involved in the offense, but less efficient. Roy Marble was the best all-around comp for Appling in Big Ten play.

Now, here's a better look at the consistency issue. I've swapped out the horizontal axis to show the standard deviation of a player's game-by-game offensive rating in conference play, rather than possession percentage. 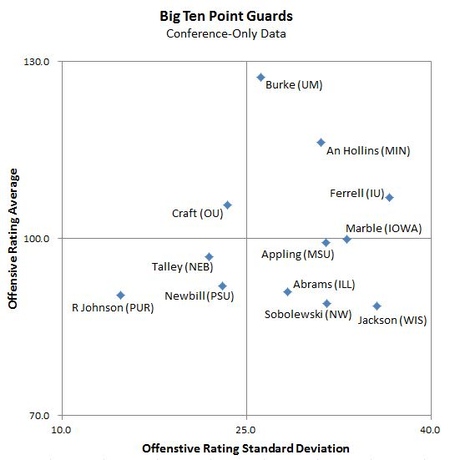 Appling actually doesn't look too bad here. Five other point guards were roughly equal to Appling in inconsistency or more inconsistent than Appling. (For what it's worth, Appling was the second most consistent point guard in terms of his role in the offense, ranking behind only Burke in possession percentage standard deviation. Craft was least consistent on that measure.) And the most consistent point guards tended to be those who took fewer three-point attempts. Appling could definitely stand to become more consistent, but he's not an outlier. Running an offense against Big Ten defenses for an 18-game stretch is no small task.

So really, it comes down to simply playing better, not just more consistently, for Appling. Job #1 is improving his jumpshot over the offseason. He needs a more consistent release to set up the drives into the lane that are really his bread and butter. At 6'1", he's not someone who can impose himself in the lane without the strong threat of perimeter scoring to set it up. Ideally, his 3-point percentage (32% last season, 25% the season before) would get back up nearer the 41% mark he posted as a freshman, when he wasn't the team's primary ball-handler.

His 2-point percentage dipped from 51% in 2012 to 46% in 2013. Really, anything in that range is acceptable for a player who takes a lot of tough shots late in the shot clock. As Con-T has pointed out, though, getting more shots at the rim would help push the percentage back up:

(In 2011-12) Appling took a robust 42% of his shots at the rim and only 27% were 2-point jumpers. That basically reversed itself this year as Appling only went to the rim 26% of the time and took 2-point jump-shots on a sizeable 39% of his attempts. His FG% on those shots was barely higher (34% to 32%) than his 3-point shooting, making those twos a highly inefficient proposition.

Appling has never been a prolific passer, but his assist/turnover numbers remain acceptable: a 21% assist rate vs. a 19% turnover rate. ( Denzel Valentine may well lead the team in assists in the upcoming season.) And he continues to produce points at the line, with a 45.5 free throw rate and 75% free throw percentage.

Defensively, Appling can be very good at times as a pressure defender. He can also drift a little bit, as he (and others) did against Aaron Craft in the loss to Ohio State in Columbus. If his offensive game is in rhythm, his defense should be more than fine.

The good news is that Appling doesn't have to have a major breakout season as a senior for MSU to be successful. Even with his offensive slumps at key times the past two seasons, MSU has contended for Big Ten titles and advanced to the second weekend of the NCAA Tournament both years. Next season, Gary Harris provides the team with a second go-to scorer and defender on the perimeter, and Adreian Payne will help replace some of the possessions Derrick Nix consumed as a primary offensive option. Appling just needs to be able to push the ball in transition (which has never been an issue) and be a slightly more efficient halfcourt scoring option. That's not a huge stretch to envision.