A sophomore leap, one year late?

Before there was Gary Harris, there was Branden Dawson: an elite athlete out of Indiana expected to come in and make an immediate impact for the Michigan State basketball team. And while Dawson wasn't the instant go-to guy Harris would be a year later, he was plenty good as a freshman, making athletic plays around the rim on both ends of the floor.

Unfortunately, Dawson's freshman season ended with an ACL tear in MSU's final regular season game. Thanks to Dawson's hard work and a seemingly bionic body, his recovery and rehabilitation process was on the short end for an injury of that severity, but it also cost him the chance to improve his individual skills during the offseason.

The results for his second season as a Spartan were, at least on paper, disappointing:

Dawson's efficiency declined in almost every major offensive category. While Dawson looked, if anything, even more athletic than he had as a freshman, at times he seemed to be pushing his role in the offense too aggressively, resulting in turnovers or ill-advised shots. As shown in the usage rate (Poss%) chart below, his aggressiveness tailed off toward the end of the season, as he became a little frustrated, I think, with his offensive limitations. (Adreian Payne's emergence as a major offensive threat also played a role here, no doubt.) 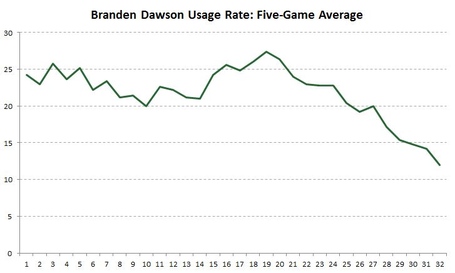 The hope is that the remedy here will be pretty simple: a full, healthy offseason to work on his game. And, of course, we're hearing all the right things about the work on his jumpshot. I did think this take from Dane Fife on Monday was interesting, though:

Everybody wants to talk about Dawson's shot. Branden, I think it's the opinion of ours, Branden is an NBA player whether he can shoot or not. Shooting can obviously add to his versatility and repertoire, but we think Branden can play at the next level whether he has a jumper or not. It's maintaining the consistency level of his energy, becoming a better ballhandler, he's a very underrated passer. I think Branden's key to being one of the better college basketball players this year - and I'm talking one of the better players in college - is his energy level. Consistency. If he's consistent with his energy level, he's gonna be one of the top players in this country.

I think that makes a lot of sense. Dawson does so many things well on a basketball court that a single weakness isn't a fatal flaw--for him or for the team. We didn't talk about his defensive performance above. His block and steal rates remained impressive as a sophomore, while he dramatically cut down on the mental lapses on defense he'd struggled with as a freshman. And he helped pick up the slack from Draymond Green's graduation on the defensive glass. If Dawson continues to play excellent defense, rebound the ball, and attack the rim on offense in the right situations, he will be a major asset to the team. As Fife implies, reducing turnovers, is the number one key for Dawson.

There may be a little tension here between individual development and team needs. The team returns four major contributors on the perimeter (Appling, Harris, Trice, Valentine) but only one on the interior (Payne). While the best thing for Dawson's professional future is probably developing his perimeter ball-handling and shooting, the team may need to him to continue to play more around the lane, at least early in the season. Tom Izzo will have to manage that tradeoff, based in part on how Matt Costello, Alex Gauna, and Kenny Kaminski develop as the season progresses.

Izzo seemed to give Dawson a fair amount of latitude last season, not pulling him or showing extreme frustration when he made mistakes on offense. He knows that a healthy, aggressive Branden Dawson would be a major asset, even on a team that has as much talent at other positions as this one does. With just a little luck, that development will occur just 12 months later than we would have hoped for prior to Dawson's injury 15 months ago.