Which Big Ten hoops teams are really slowing things down on offense?

The basic question tempo-free basketball analysis asks is "How many times did a team or player do something compared to the number of times they had the chance to do that thing?" At the broadest level of analysis, this simply means dividing the number of points a team (or its opponent) scored by the number of possessions the team had the ball for. That second number--referred to as "tempo" or "pace"--has, therefore, taken up a key position in the analytical community.

At times, in fact, it's probably been overemphasized, as a team's (/coach's) entire style of play has been imputed from a single indicator. You can't necessarily tell whether a team with a low pace figure is sitting on the ball on offense or just forcing its opponents to play long possessions with lock-down defense.

Mr. Pomeroy has recently unveiled a clearer way of looking at a team's offensive and defensive tempo by calculating average possession length for each side of the ball. Technical description:

The measurement for component pace is about as simple as it gets: each team's average possession length (APL, measured in seconds) on offense and defense. The number is not adjusted for competition and it measures the length of an entire possession, so offensive rebounds count. In the future this will probably change, but the raw data is insightful on its own.

This data is of particular interest to us Big Ten types, given the conference's reputation for a slow pace of play. Hence, scatterplot! 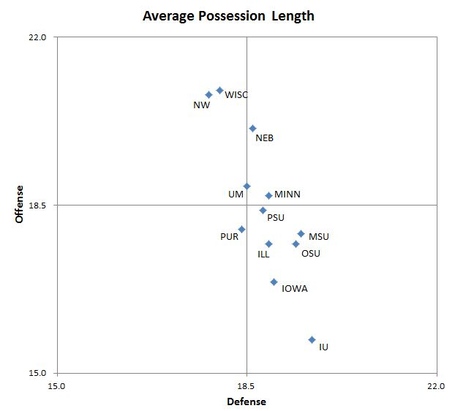 Note that a higher average possession length means you're playing at a slower pace. I.E., the closer you are to the upper, right-hand corner, the more #B1G you are.

Here's the same graphic, but showing all Division 1 teams (with a slightly expanded scale): 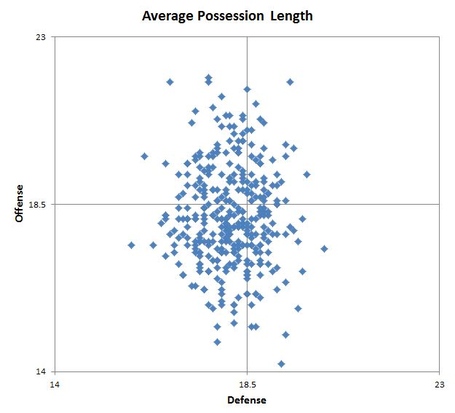 KenPom notes that (1) there's more variation on offense than on defense since the offense controls the ball and (2) longer defensive possession length tends to correlate with better defense. The Big Ten scatterplot actually shows an inverse correlation between offensive and defensive pace--teams that played slower on defense tended to play faster on offense, and vice versa--but, looking at the larger Division 1 universe and three previous seasons of Big Ten data, it looks like that's a one-year anomaly.

--Bo Ryan really is trying to kill basketball. Wisconsin actually ranks as one of the faster teams on defense, although a lot of that is probably due to their excellent defensive rebounding.  On offense, the 2013 Badgers were the slowest in the league but still nearly a full second faster per possession than any of the three previous Badger teams.

--Same deal for the dearly-departed Bill Carmody, except for the defensive rebounding part.

--The high-flying Hoosiers were the outlier on the other end of the spectrum, ranking 10th in the country in shortest offensive possession length, despite being very good on the offensive glass.

--After Indiana and the up-tempo, Fran McCaffery-led Hawkeyes, MSU was right in the next tier of teams, with Ohio State, Illinois, and Purdue. All four teams were a little above average in offensive possession length nationally despite playing half their games in the Big Ten.

--Meanwhile, MSU was second in the league in forcing long possessions from its opponents. In three of the four years KenPom has posted this data for, MSU has ranked in the top 20 nationally (including #2 in 2010) in that measure. And that's despite generally being a very good defensive rebounding team. This makes some intuitive sense given Tom Izzo's overall defensive philosophy: don't overplay for turnovers, play aggressive help defense, and hope to force a tough jumpshot late in the shot clock.

So, to sum up: Bo Ryan is evil, Tom Crean is frenetic, and Tom Izzo coaches good defense. So nothing we didn't already know. Sometimes better data confirms what you already believed.  In fact, Con-T had ferreted most of this out last December using hoop-math.com data.

I think the one perhaps counter-intuitive finding is that more Big Ten teams tend play more slowly than the national average (of about 18.1 seconds/possession) on defense than on offense.  (This was true in 2012 and 2011, as well--although not in 2010.)  Other than Wisconsin, Northwestern, and Nebraska, Big Ten teams are playing at pretty reasonable tempos on offense. It's the slow tempos they force their opponents to play at that drives the league's overall slow tempo. And that largely speaks to the quality of their defenses.

Big Ten hoops lethargy: It's a feature, not a bug.