Eat Your Cupcakes: Run Up the Score and Become a Better Football Team

Share All sharing options for: Eat Your Cupcakes: Run Up the Score and Become a Better Football Team

You could pick through the remains of last season like rummaging through an old attic and find a lot of unpleasant garbage lying around (what's this damp cardboard box with 'Power Offense' sharpie'd on the side?), but one of the weirdest and most unpleasant aspects was how even the most unimposing of defenses turned games into nail-biters.

Even the wins were chores. Slim halftime leads, or no leads at all. Plodding offensive outputs, low point totals. 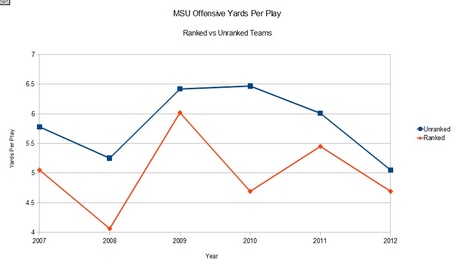 How did a lousy 5.05 yards per play vs ranked teams, less than or equal to the team's performances vs ranked teams three of the past 5 years, affect the squad in ways beyond the win-loss category? Two big ways:

The 2011 team caught a lot of heat for not getting back-ups enough playing time, particularly at WR. But it seems likely that 2012 managed to top it. Consider:

-Connor Cook, in the 12 games before scripted plans/unscripted necessity in the bowl game, had just 6 pass attempts. Would've been nice to get a slightly longer look at one of the contenders for this year's starting QB position.

-Jeremy Langford, in 13 games, got 9 carries, which, like Cook's, all came in the CMU blowout. Again, as another player vying for a starting position, would've been nice to get a bigger sample size from him.

-Macgarrett Kings, another player fighting for playing time this year, had his redshirt burned in the CMU and had 2 catches for 18 yards, but never found enough opportunities to be able to get sufficient action to generate a rhythm.

On a team that effectively buries its easy opponents, each of these players, among others, could have gotten a dozen, or dozens more reps, lessening some of the uncertainty heading into this season.

In college football, it can be less about what you do, and more about how you do it. In short, everyone loves offense, and maybe even more than they love offense, they dislike and ridicule bad offense.

In a light-hearted way, this means sitting through an off-season of "I miss football so much I'd even be willing to watch Michigan State-Purdue." style jokes.

On a more serious note, it has actual implications in the selection of

"But the AP has no weight in BCS rankings!", you say, "Only the coaches poll does."

At which point I ask, "But do you really think the actual coaches are voting in that poll?"

"Well, not all of them every week, but at least some of them do."

"Do you really think that?"

"OK, well, not most weeks, but at least at the end of the season."

Exactly. The general assumption is that most 'coaches poll' ballots are handed off to a SID who is probably quickly glancing at some scores each week and filling in names. In that case, do you want to be the team winning 49-14, or 28-6?

And even with the AP top 25, sports writers and assorted media members, who we can assume (maybe generously) are putting more effort into their top 25 ballots, are often the key to Sportscenter, College Gameday, and all the other drivers of public opinion featuring your program and not.

As has been covered endlessly the folks who select for bowl games have a list of priorities that roughly shakes out to: 1. Money 2. Money 3. $ 4. What do you mean I HAVE to take Northern Illinois? 5. Money 6. Who's the best team? In some cases, you're always going to be in trouble going in for an at-large spot against a program with a massive fan-base guaranteed to make the bowl organizers a bunch of money.

But in a fairer fight, a team which stomps out its easy games in ultimately going to appear a more 'exciting' (see: high scoring) selection, and also have a fan-base more pumped up to watch it (for whatever reason, fans, myself included, seemed more excited to watch MSU in late 2009 then they did in late 2012, even with all the suspensions). If a few of those close games had swung the other way and made MSU a 9 win team, they would almost certainly have beaten out Northwestern in the bowl selection last year due to fan-base size discrepancies, but I would wager the same could not be said of MSU v. Nebraska last year, simply due to the way 2012 MSU was viewed stylistically next to 2012 Nebraska.

I don't think MSU is going to make it to a BCS game this year, but I am sure they aren't going to make the national title game with the problem being, stupid as this seems, the Spartans are too low in the 2013 preseason rankings.

Essentially, if you're out of the top 10, top 25 teams, you're in a massive hole before you've even played your first game. You flat aren't allowed to lose a game (like 40% of all BCS title game participants do) because it will negate your long climb up the rankings, and God help you if you lose your game late in the year.

A couple of arguable exceptions:

2012 Notre Dame- started back in 24th place. As of week 11, they were still in 4th in the BCS and Coaches, behind three teams who were (surprise!) ahead of them in the Coaches poll. If KSU and Oregon had not lost a game each, ND would have certainly not made the title game, almost entirely due to that 24th place preseason rank. If Notre Dame had lost a game somewhere, they also would not have made the title game, being possibly leapfrogged by Florida, Oregon, or possibly even Florida.

2010 Auburn- started back in 23rd place. As of week eight, Auburn was just 4th in the BCS. The next week it catapulted to 1st, but only due to extremely strong computer rankings. Had it lost a game, Auburn falling behind a 13-0 TCU team (not yet in the B12 and thus unworthy as a title game competitor in the eyes of many) that began the year 7th, and in all likelihood a 11-1 Wisconsin team that started the year 12th would've jumped them.

It short, starting the year as far back as MSU leaves basically no margin for error in the way many title game (and BCS) participants receive.

2010- MSU- Started the year at 42, their single regular season loss knocked them all the way back to 7th, memorably behind both OSU and Wisconsin.

2008 Boise State- starts year 34th, goes 12-0, considered only the 9th best team in the country at end of regular season.

And on the list goes. As you can see, in one case even the top ten ranking wasn't enough, but as you fall further and further back in preseason ranks, it becomes tougher and tougher to jump other teams over the course of the 15 week season.

Now what does all this have to do with stomping cupcakes? Well, here's a handful of teams who finished near or around MSU's W/L last year but seem to be getting considerable extra credit this preseason due to impressing vs weaker opponents:

So close in tough games. So far away in must-wins.

And we see the decent perception deficit MSU now has to make up on offense, despite returning numerous starters and what could be one of the nation's best defenses. Matching records and slightly surpassing on-field output with any of those six teams might not be enough at the end of the year.

Though better offensive performances vs the weaker teams on the schedule would've added just a single win last year, the benefits in roster depth, post-season assignments, recruiting, media coverage, and this year's preseason ranking are all small benefits that make a stronger and more popular Spartan team, both things, I think, key to winning big in college football.

The hope is the offense can both do better against ranked teams and unranked teams, the lowest expectation should be that at least the Western Michigan's of the college football world will be crushed beneath our feet.