We can't start a new college sports season without a scatterplot, can we? 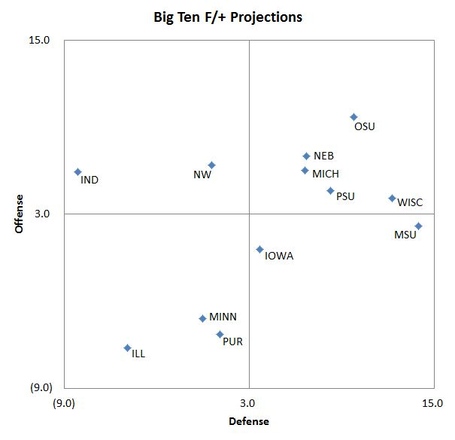 That's based on the very-hard-to-explain-but-thoroughly-well-adjusted ratings from the good people at Football Outsiders.  The ratings capture the conventional wisdom pretty well:

--Ohio State is half a head above the rest of the league, although FO doesn't think they merit the #2 spot nationally the pollsters are giving them.  They come in at #10 in the FO projections.

--Then you've got a bunching of five teams, all ranked between #17 and #24 by FO.  Of those five, Michigan State has the most extreme personality.  Their defense is the strongest unit on either side of the ball in the league, but their offense is the weakest unit among any of the six obvious contenders.  Wisconsin seems a little wild-card-y given the coaching transition.  FWIW, I think their model probably doesn't fully capture the Brady Hoke talent rebound for Michigan.  It uses a five-year backward-looking average as a measure of program strength IIRC.  Nebraska and Penn State are mirror images of each other--fairly promising on one side of the ball, decent-but-shaky-ish on the other.

--Northwestern, Iowa, and maybe Indiana are your middleweights (although if ever there were a season not to sleep on Northwestern, this is the one).

--Minnesota, Purdue, and Illinois will be punching up from the bottom.

Applying those ratings to each team's schedule produces some nice looking numbers for MSU: 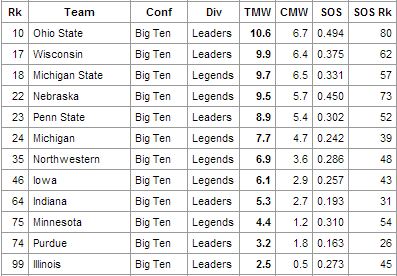 TMW is Total Mean Wins.  CMW is Conference Mean Wins.  These projections make MSU a decent favorite in the Legends Division, largely based on conference schedule advantage.  If you look at the three Legends contenders, Michigan has to play two quality crossover opponents (OSU/PSU).  Nebraska has to play one (PSU).  Michigan State plays zero.  So that's good.  (If you stretch things to include Northwestern as a sleeper contender, they've got the toughest schedule of all, with OSU and Wisconsin on the slate.)

This is a big year for Michigan State football in terms of program perception, recruiting profile, and future season ticket sales.  But it's also a big year in terms of the opportunity for on-field success that presents itself.  The question marks on offense remain pretty big going into Friday night.  But the question marks on defense are about as minimal as you're going to find.  And the schedule sets up about as nicely as you could ask for, as the team will be allowed to ease into both the nonconference and conference seasons.  November could be quite a ride.