Over the offseason, there's been a lot of back and forth about whether Andrew Maxwell was the right guy for the QB job. Another angle is of course the differences between the old OC and the new blood. In some speculative spirit(Read: HOLYCRAPWHYISNTITFRIDAYALREADY?) we take a look at the most famous of Roushar gadget plays and one I saw in the Spring game that gives me hope MSU isn't being wacky for wackiness sake. 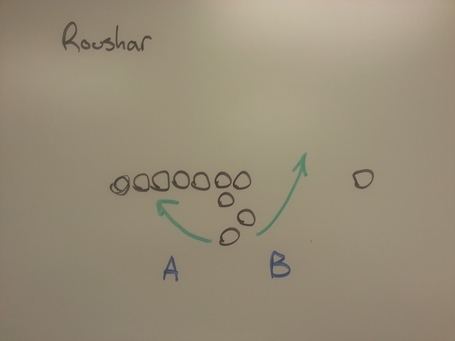 This is the most famous of all the trick Roushar plays. The one at Notre Dame in 2011 where people just shook their damn heads. This is an unbalanced line formation which I belabored to death last fall when it got trotted out against Notre Dame for a second year. In 2011, MSU ran this play six times against Notre Dame and POP QUIZ HOTSHOT, do you think they ran in the direction of A or B more often?

If you picked B, you're the winner, even if MSU wasn't. They ran misdirection four out of six times which once you've established it as a tendency isn't so misdirection-y anymore is it? 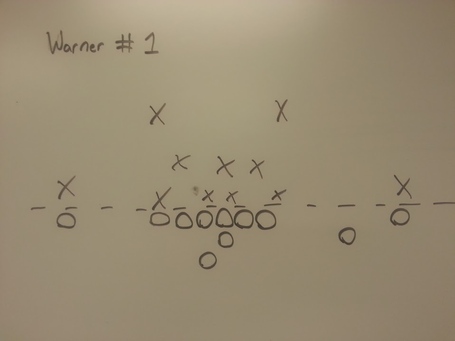 MSU lines up with 3 WR. Nick Hill lines up in the slot. 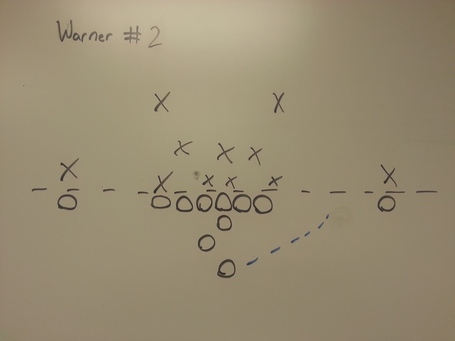 Prior to the snap Hill goes into motion and runs backward. He runs a HB toss in reverse. Around the time he gets to where a RB would be in the offset I formation the play snaps. 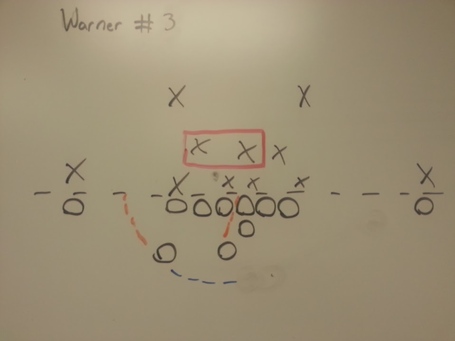 Once the play has snapped the QB has to make a read whether to handoff to the FB or toss to the RB. This puts a lot of pressure on the Sam linebacker. If the Sam starts cheating to the outside to stop the RB, he hands off to the FB. If the Sam comes to the inside to help with the FB dive that frees up the toss play. I can't remember whether or not MSU passed out of this formation in the Spring game, but that's yet another option. With the Tight End right there he could slip the block and run right at the Sam.

Very important, this play attacked a schematic weak point in MSU's defense. In the MSU defense the linebackers have to make a lot of reads in not much time. Is it a run or a pass? If it's a pass the Sam has to decide if the TE is going deep or running a short route. If the TE is going deep the Sam hands off to the safety, if the TE goes short the Sam is responsible for the pass coverage.

This was a gadget play designed not just to make the D scratch their heads, but also to take advantage of a systematic "weakness" in the defense. This is a huge improvement over the Roushar gadgetry. I always envisioned Notre Dame's DC seeing that Unbalanced Line and chuckling like Jabba the Hutt after realizing the OL's blocking was too poor to run strongside.

Our friends over at Eleven Warriors might snicker at the idea that "Walrusball" is an improvement over Rousharball, but at least gadget plays are concerned we seem to be headed in the right direction. Hopefully? Right? Holy crap can it just be Friday night already?