Jairus Jones and Jumping Into 3-3-5 Hyperspace

The Spartan's retooled defensive package is everyone else's new third down nightmare.

Share All sharing options for: Jairus Jones and Jumping Into 3-3-5 Hyperspace

(We could all probably use a small break from talking about the offense, so here's a palate cleanser. Apologies in advance for the bad picture quality on some images. It's the best I can do right now)

MSU's third down base scheme the past few years, the 3-3-5 (3 defensive linemen, 3 linebackers, two cornerbacks and three safeties) has always been a lot of fun. Typically, MSU replaces a subbed out defense tackle with the first safety off the bench (RJ Williamson, Drummond in past years) usually swaps out an outside linebacker with some fresh legs (Steve Gardiner, Kyler Elsworth), and often replaces a another defensive lineman with his pass rushing specialist (guys like Shilique Calhoun and Denzel Drone).

But even though there is almost always tremendously entertaining stunting and switching going on in the front six, the back five was often comparably predictable, most commonly with the third safety dropping back down-field from the nickel-back position to a three-deep shell of safeties right before the snap with the corners each taking an outside receiver.

That first paragraph is still true. The second paragraph might not be anymore... WITH SEXY RESULTS. 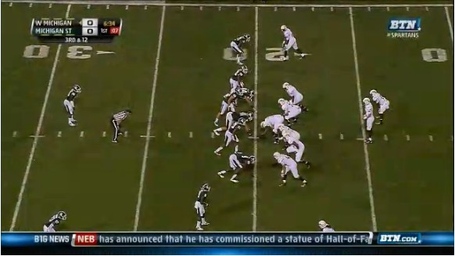 MSU lines up with a flat front six across the line of scrimmage. They've been doing this, especially out of this 3rd down package, regularly for years now, so it's nothing revolutionary, but is smart football, as it disguises which players are blitzing and which are dropping back into coverage, a key facet of what makes this play work. 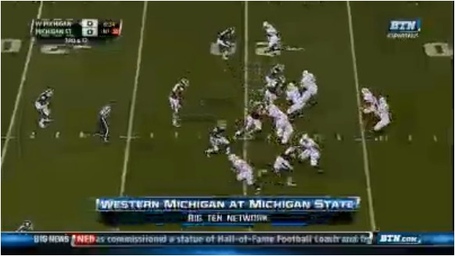 The blitz is a fake, just a standard four man rush here (Allen, Rush, Hoover, Calhoun) with seven players back in coverage (Bullough, J. Jones, Dennard, Waynes, Williamson, Drummond, Lewis). The threat of the blitz has sufficiently worried WMU into pass protecting with 6 blockers, so the coverage math is pretty good in MSU's favor. 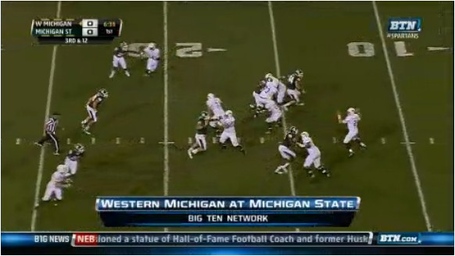 Shilique Calhoun, initially lined up over the TE, shoves the left tackle backwards, gets the lineman's legs crossed over and applies pressure. The hurried WMU QB throws his check-down, a simple stick route to the TE that looks somewhat open. 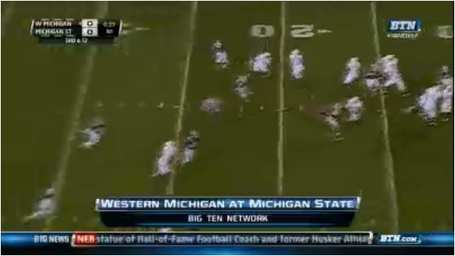 But here's where Jairus Jones brings in a special skillset that the rest of MSU's OLBs can't match. He has this route read from the start. He backpedals off the line of scrimmage, opens his hips, closes the lateral gap between him and the tight end and steps in front for the simple interception. It's a simple DB play that a lot of linebackers would struggle with. 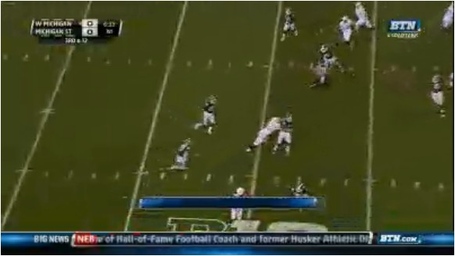 But Jairus Jones looks super-smooth here, because, well, he's a safety. MSU lists him at linebacker, and they deploy him further up-field, but they play him for this moment, where he baits the QB and easily grabs hold of the turnover with the ease of a man who's done this a time or two before.

The coup de grace on this play, the smart, heads-up decision to, as he was being tackled, lateral to a trailing Kurtis Drummond who floats into the end-zone untouched has nothing to do with tactics and everything to do with a bloodthirsty, experienced, defense seizing every edge that it can as the other side of the ball works through more growing pains. 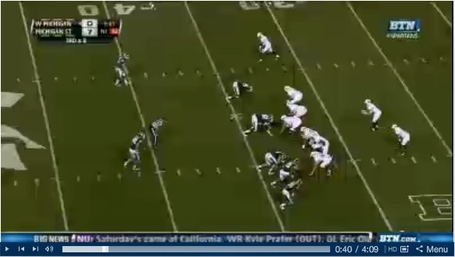 This time MSU is bringing an actual blitz. Same package, same personnel, but here WMU is presented with a vastly different look, with Bullough and Jones both sitting 7-8 yards deep off the line of scrimmage, Denicos Allen on the left side of the offensive line instead of the right, and most deviously (and most Pat Narduzzi-y), Darqueze Dennard sneaking down to overload the left side of the line with a corner blitz. 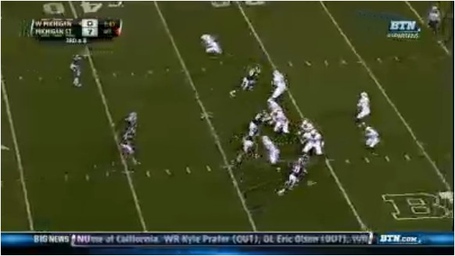 Marcus Rush stunts way over Tyler Hoover, Allen's first step is outside, and Dennard is off Allen's outside shoulder. 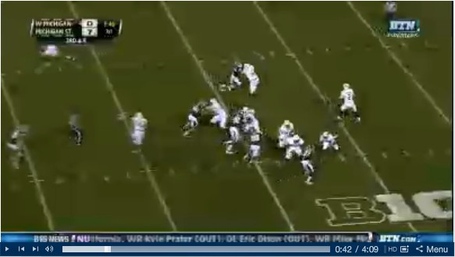 Then Allen jab steps inside almost like a shooting guard cutting into the lane, and no one picks him up as he heads into the massive gap in the WMU protection vacated by Rush and the left side of the Bronco line. Darqueze Dennard, with the help of some tricky movement by Rush and Allen, has attracted three (Three!) blockers to himself. Please watch this, it's just so damn beautiful. 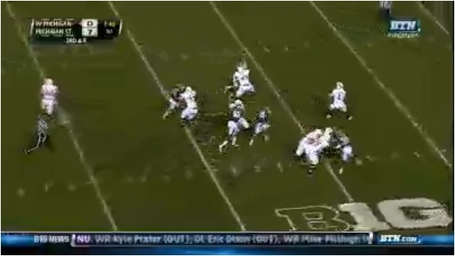 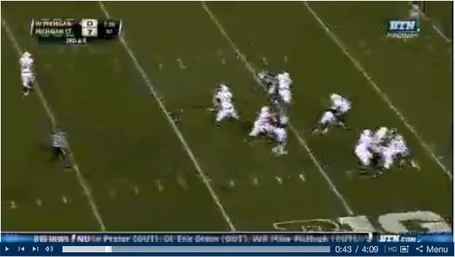 Anyways, given a straight run at the QB Denicos does what he does and lights him the hell up as he throws, leading towards a misfired ball out into the secondary. 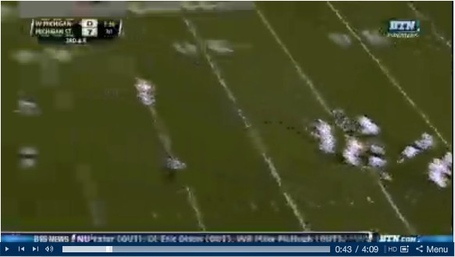 Jairus Jones (the uppermost green and white blur on the left side of the screen is ten yards downfield of the line of scrimmage here, ready to come up and stop the tight end short of the first down marker if the QB decides to throw the short crossing route to him. 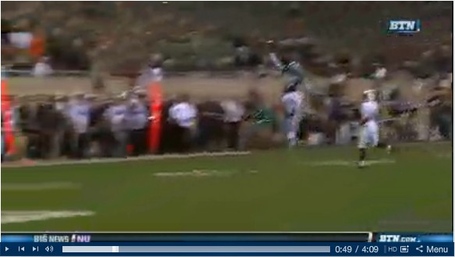 And then behind him, where the pass was intended for a deeper receiver, Kurtis Drummond makes a leaping, one-handed interception that will live on in Spartan hype videos and highlight reels for years to come. Again some things you can scheme and teach and some things you can't. Even though Jones does not come up with the pick himself, he frees up other defenders to make plays. Again, showing the value of having a fourth safety on the field in these clear passing downs. 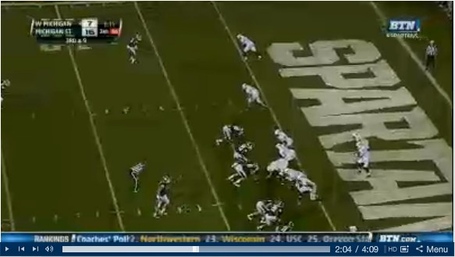 MSU, like the first play has 6 defenders flat across the line, but like the second play is representing serious pressure with Allen and Dennard off left tackle. This remix of two previous concepts provides the third look for WMU offense. WMU's slot receiver is left uncovered at the start of this play. 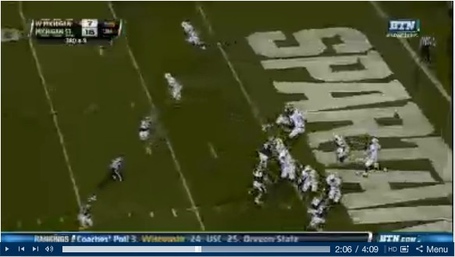 Jones drops back from the middle of the line of scrimmage towards the slot receiver, then sits and waits in a shallow zone. Allen and Dennard execute the same blitz as before with Allen faking outside then bursting inside. 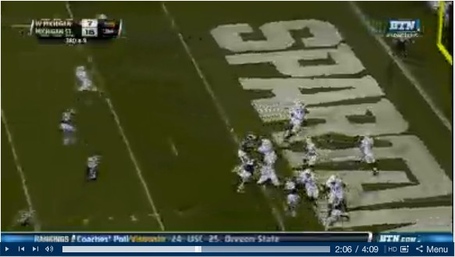 Rush attacks the WMU center this time instead of stunting, 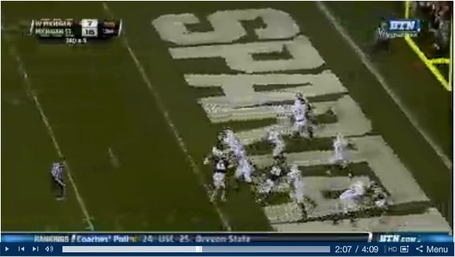 and Allen easily sidesteps the WMU left guard to pressure the quarterback. WMU's quarterback, looking decidedly like a man who doesn't want to take a ride on the Denicos Allen Express, gets rid of the ball hastily, and underthrows his receiver's route- 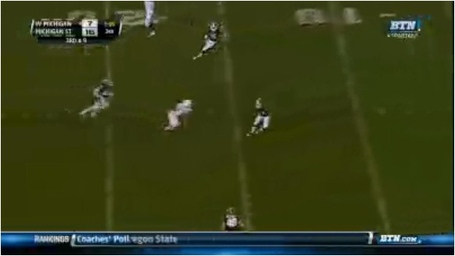 right into the shallow zone of a lurking Jairus Jones who flips his hips, takes a few strides backwards and plucks the ball out of the air, like... well, a defensive back.

There should be an easy way to embed this here, but I haven't found it. Soooo.

Go here.  Right beneath the video player on the left side of your screen there's those filters that start with 'all, big ten blast, did you see this?' etc. Go down to the school filter and click on 'Michigan State' out of the list. The video you're looking for is titled 'Western Michigan at Michigan State - Football Highlights' and is 4 minutes and 3 seconds long.

Four safeties and the evolution of the Spartan's 3-3-5

With Jones joining Williamson, Lewis, and Drummond, the new-look Spartan 3rd down package presents an imposingly mobile, confusing, and dangerous scheme for opposing offensive coordinators and quarterbacks. The ridiculous zone blitz drops into coverage and cover skills of Jones not only allow for surer coverage of underneath routes, it also critically, as it does in two of these three plays, allows for Narduzzi to freely blitz cornerbacks or the three safeties without diminishing his number of back seven players with above average cover skills.

Simply put, Jones' presence allows the pass rush possibilities out of the 3-3-5 to be expanded from the standard six players (the three linemen and the three linebackers) of MSU's older 3-3-5's to any of the 11 players on the field, without losing considerable coverage capabilities down-field. A corner can be brought because Jones can rotate into the safety's shallow zone as that safety rolls over to cover the sideline. Or one of the three safeties can come up the middle and Jones (or Bullough, who's no slouch in coverage himself) can drop deep in a classic Tampa Two scheme. Jones unlocks so many more of the attacking angles and possibilities of the 3-3-5 in clear passing downs without blatantly compromising the coverage behind the rush.

In this first test, a combination of just five players attacking an offensive line out of this formation in three distinctly different ways produced three interceptions, including a defensive touchdown. Ready for the jump to hyper-space? Punch it, 'Duzzi!