The Youngstown State Offense and the Orbiter Motion

Share All sharing options for: The Youngstown State Offense and the Orbiter Motion

Youngstown State under offensive coordinator Shane Montgomery run more under-center plays than say, Northwestern or Ohio State do currently, but are still predominantly a shotgun offense that mixes in some pistol and under-center stuff as desired. From what I can tell of the eight or so minutes of highlight video that YSU has graciously hosted so far, the orbiter motion I'm talking about in this post is just out of the shotgun formation.

What is the orbiter motion?

It looks a lot like a normal slot receiver jet sweep (like MSU runs) for the first few seconds of the motion, but as the WR crosses behind the offensive tackle he swings up-field so that he crosses behind the QB and the RB, instead of in front of them like he would on a jet sweep. 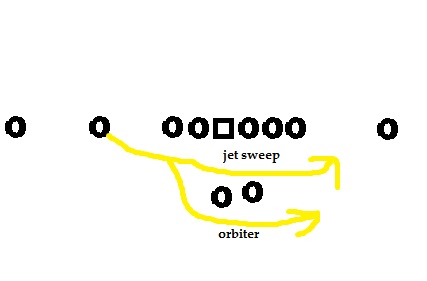 Usage in the pass game

-check man/zone and isolate a receiver in space.

Here on the goal-line, YSU would like to run a simple pitch and catch to their outside receiver. To snuff out any possible dangers they send the slot receiver on the left side into the orbiter motion and as he drags the defender with him, the QB diagnoses that there's a very good chance Morehead State is in man to man, meaning his receivers slant route is going to be able to put his body between the only defender (the CB) and the ball, and lead to an easy touchdown.

Usage in the run game

-Move safeties on inside runs

Slot receiver goes into orbiter, the corner back (free safety?) follows him for a little bit, but halfway through he stops and the strong safety picks him up. But as he follows the orbiting receiver to the other side of the field, the strong safety's vacated his position as the last line of defense in the run game. Because of this, when the RB takes the inside hand-off, and makes a nifty juke to get to the second level, the corner back (free safety?), who probably isn't as sure of a tackler as the strong safety, has to take an angle from the side instead of head-on, and bounces of the RB as he finds his way to the end zone.

-Move linebackers on inside runs

Slot receiver orbits, Morehead State is run blitzing out of a 2 deep safety look. Because the safeties are deep, the left outside linebacker has responsibility on the orbiting player and tracks him outside. Unfortunately, both his fellow linebackers overpursue into the backfield and because the LOLB has been pulled outside, when the RB gets through the line over his right guard there's zero gap integrity in the Morehead State defense and he flys into the second level of the defense untouched. The RB jukes a few tackles and gets all the way into the endzone.

And then when you're used to the slot receiver curling backwards behind the other backfield players, he doesn't, and takes the hand-off with the RB acting as his lead blocker to the edge. The receiver on the sweep picks up one nice block from his pulling tight end, picks up another from his lead-blocking running back, and then turns the corner, before cutting back all the way across the field for a huge gain.

Other possibilities not explicitly shown in these highlights

This is probably the most natural built-in advantage the play offers over the normal jet sweep. On the second and third videos, after the fake on the inside run to the running back, the orbiting slot receiver is now slightly ahead and behind of the QB in perfect position as a pitch option as the two could stretch the defense horizontally on a option play.

If unlike in these plays a defense refuses to allow a player to be decoyed away from the play, YSU can simply throw to the orbiter in stride on a little swing pass and let him run into the space of the flats.You can see this possibility presented in the first video

QB either fakes the hand-off inside to the RB, and then does a 180 and hands-off to the orbiter coming behind him, or skips the fake all together, giving a similar running action as a jet sweep.

This motion helped score three of the teams touchdowns against Morehead State (who are terr-i-ble, it's well worth mentioning) and assisted in setting up another big run vs Dayton. While mostly used in these contexts as a tactical way of dragging defenders away from the play, there is still a dangerous chance of quickly and safely getting the ball into the hands of a play-maker in space against the team that gets too comfortable treating the motion as a harmless decoy.

Moreover, it's a slightly different motion that the MSU defense hasn't specifically seen much these past few years, if at all. While the actions out of the motion are pretty vanilla in these first two 2013 games, it will be interesting to see if any new wrinkles appear in their orbiter this Saturday, as YSU looks to get an edge vs an imposing defense.