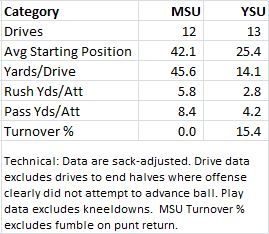 Chris and Heck have already hit a lot of the statistical highlights.  So I'm going to keep this short.  This will also serve as a defensive mechanism against reading too much into one data point . . . one spectacular, life-affirming data point.

The offense: We haz one! Six of eight drives with Connor Cook at the helm went for TDs.  Six drives total of 50+ yards.  That'll do, pig, that'll do.

As other have noted, the diversity of the attack was perhaps the most encouraging part.  MSU was successful rushing the ball with the running backs (5.4 yards/attempt among the three main options), quarterbacks (6 rushes for 43 yards), and wide receivers (2 rushes for 35 yards).  And ten players had at least one reception--including 5 receptions among two tight ends.

The downside to all this was maybe giving away a little too much of the playbook going into the Notre Dame game.  But that sure beats not giving away anything because you're not actually picking up first downs so as to be able to run more plays.

The offense posted a disruption percentage of 6.3%.  This is the best number posted since the start of last year, just below the CMU and Michigan games last year.  All the O-linemen being in play presumably played a role there.  Can we make a deal with AMSUOLHG that, if he takes this week off, we'll let him smite one starting lineman with a 2-3 week injury next week and take out a backup for the season a couple weeks later?  Is that fair?  Should we just leave the linemen at the top of the Beaumont Tower?  At high noon, or midnight?  What works best with your schedule?

Our long, national quarterback competition nightmare is over. It's obviously Cook's show now.  His passing accuracy wasn't beyond criticism, but it was plenty good for a dual-threat guy.  (One dose of perspective: His career passing numbers now stand at a 54.5% completion percentage and 5.6 yards/attempt.)  And Tyler O'Connor's performance was encouraging, as well.  If Cook really struggles against Notre Dame, I'd expect Andrew Maxwell to take over.  But if Cook went down for a significant amount of time, I'd expect/hope for O'Connor to take over and continue running a more run-heavy offense.

It's worth noting that, for as messy as the competition was to the public, it looks like it may well have worked--or at least worked as well anything was going to given the overall state of the offense.  Going into the first competitive game of the season, we've got a starter who can make some plays that weren't made last year.  And he got 19 drives in at the helm against live competition (of 35 total, excluding run-only drives).  Time will tell, but if you didn't want open competition in games, Andrew Maxwell would still be the starter.

The defense: WHERE ARE THE POINTS??? Just kidding.  17 points allowed is an eye sore on the statistical record, but obviously the fundamental metrics were all fine.  The disruption percentage was a non-BEAST MODE 31.9%, but that's still quite acceptable.  Shilique Calhoun was clearly saving his next couple touchdowns for the national broadcast next week.  He still managed a TFL, a fumble recovery, and 4 QB hurries.

--First in the nation in yards/play, yards/game, yards/pass attempt, and completion percentage.

Special teams: Just one thing. Andre Sims fumbled again.  Two is a small sample size, but in a season that looks to be played on a razor's edge again, you don't screw around.  Nick Hill and MacGarrett Kings both came in and posted a return of 15+ yards, so the overall punt return game still quite looks quite functional.

Penalty Watch. 2 for 19 yards.  One each on the offense and the defense.  We'll take it.

The Big Finish. One game against an FCS opponent can only constitute a baby step.  But it was a pretty enormous baby step.  Beat Notre Dame.