Share All sharing options for: The Triangle Route Combo

"What would you do if you were MSU's offensive coordinator?"
"I'll tell you what I'd do: Beat two defensive calls at the same time, man."

Last week, I was annoyed that against pretty obvious pre-snap coverage, MSU seemed to have no real schematic plan of attack. MSU looked bad against a lot of man-to-man from USF, and didn't even seem to be running plays where you could go, "well, if USF was in cover-2, that would've worked great."

From the '80s? This is still gonna work?

Beautifully. And don't take this play's word for it, the triangle concept is one of the favorites of intelligent football dude Noel Mazzone, who you may or may not know as the UCLA OC who just provided about a third of the reason to fire Bo Pelini in the past few days (you can read more about Mazzone and the triangle concept in some of the links at the end of this post).

This triangle route combination is made up of three component routes 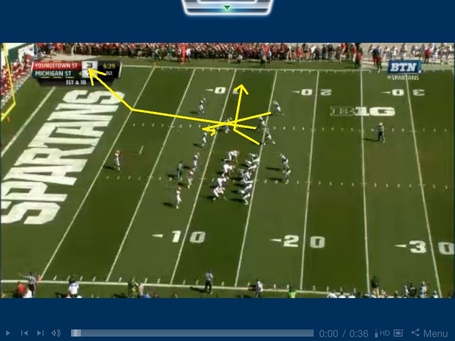 The play's vertical stretch. Wide receiver goes straight up-field about 12-15 yards, then breaks off on a diagonal towards the outside sideline (or, in this case, the back corner of the endzone).

In all that vertical space being vacated by the corner receiver, another receiver stretches the defense horizontally and heads into the open space on the sideline.

This is what makes the play. The outside receiver runs a little diagonal route towards midfield, then sharply hooks around to face the QB around where the OLB would hang out in MSU's standard 4-3 look. 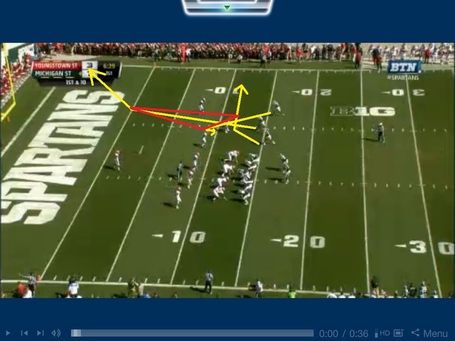 These three routes combine to form a 'passing triangle' that gives the QB automatic reads vs certain coverages as to where to throw the ball.

Against man-to-man, however, the triangle cleverly builds in a mesh point between the snag and flat routes that frees up the flat receiver for a nice gain vs that look, as well. 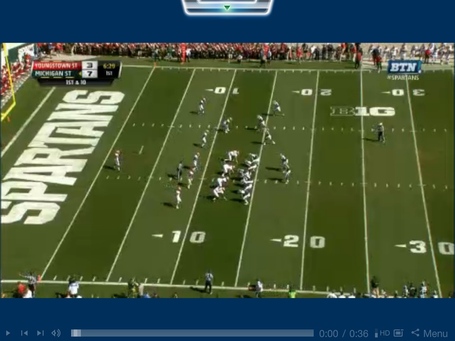 MSU comes out in shotgun on the left hash, with three receivers in trips to the right side. Youngstown State is playing with a single high safety, with both their corner-backs also at the top of the screen and their other safety in tight coverage on MSU's middle receiver. This is man-to-man, it's obviously man-to-man, but then, MSU has seen a lot of obvious man-to-man coverage lately and had basically been able to generate diddly. 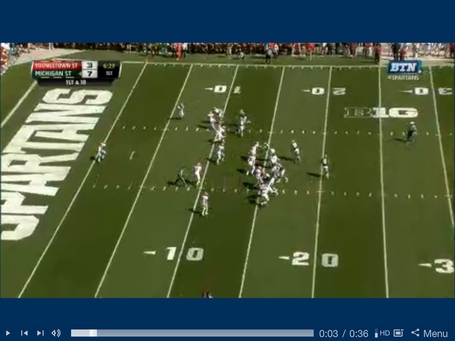 Mumphery, the receiver running the corner route, already has inside position on his man, so in a world where the initial man-to-man read was getting pressed and re-routed at the line, it would absolutely be a fine decision for Cook to throw it up towards the pylon. But he won't need to make that difficult throw, because an easy one is about to open right up. 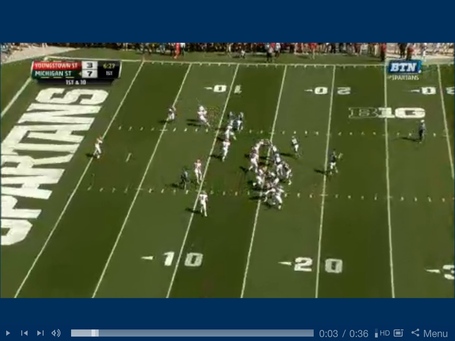 Burbridge and Andre Sims set a really nice mesh point and while this doesn't actually 'pick' the defender in a blatant way, it illustrates why it can be so hard to stick to your man as a defensive back in this situation. To avoid getting picked by Burbridge, the cornerback has to take several steps up-field, and while he's moving up field, Sims is continuing towards the side line. These steps, combined with Sims' speed frees him up with a couple steps to spare. 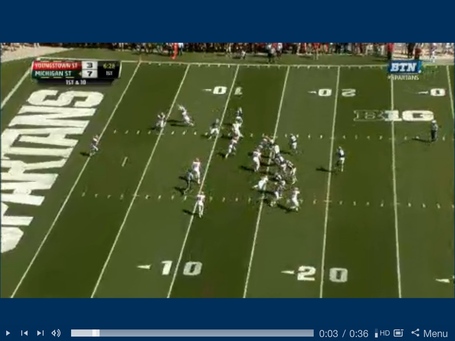 Cook rolling right, makes the correct read and throws a nice, simple, ball to Sims who is able to catch it basically in stride. Nothing special from Cook here, but he does what he needs to. 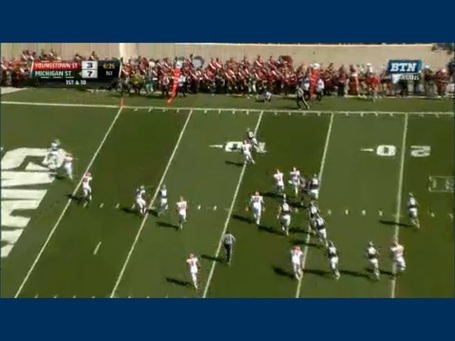 Sims turns up-field with essentially nothing but grass in front of him (the free safeties attention is still on Mumphery). He needs to beat the cornerback behind him and the safety coming over from midfield to the goal-line in a footrace. 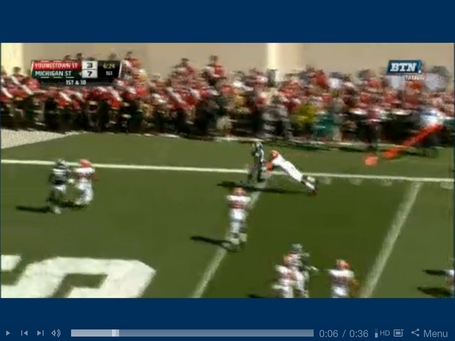 Which, being pretty fast, he has little trouble doing. An easy 12 yard passing touchdown.

A note on the pass protection

I really like MSU's decision to roll the pocket out to the right here. Once MSU has diagnosed the man to man and knows this flat route is going to be Cook's first read, the throw from the left hash all the way out to the right flat is still not the easiest, particularly for a QB who has exhibited bouts of haphazard accuracy. By rolling him out to the right and having the line move with him, you give him a shorter, easier, throw, without increasing the risk of him eating a field side blitz or pass rusher (note too, the MSU RB is prepared to pick up a blitzer or rusher who gets through, giving a young QB an added layer of protection. Good stuff.

Go here. enter 'Andre Sims 13 yard touchdown' in the search box right beneath the video player. Click on the first result that search brings up (it's a 36 second video). Enjoy.

Against a tougher opponent, Sims might not have as much space coming off the mesh point, a defender might be quicker to react before he crosses the goal-line, or Cook might get put under actual pressure. But, and this is really encouraging, MSU is dialing up a time-tested man coverage killer and getting some really solid play out of its wide receivers. Neither of those things really happened simultaneously in weeks one or two.

There will be coaches who will be more than happy to sit in these single high safety looks vs MSU and bank on the same success USF and WMU had, but if the Spartan's can run smart plays like this consistently, that shouldn't be an issue. This play is really nice in that in both corrects a flaw in previous week's offensive schemes, and gives a nice, easy, read to a RS sophomore quarterback with limited game experience. Well done all around.

Further reading material about this concept/bibliography: