"That's a nice play you've got there. It'd be a real shame if we incorporated it into our passing attack."

Share All sharing options for: Four Vertical Routes and the Mid-Play Read

I've been used to MSU being a 3-verts team for some time now. If MSU was going to send everyone on all vertical routes, it was gonna be three guys: one to the right, one down the middle, one to the left. Treadwell did it, Roushar continued that when he took over, to the point where the only touchdown I can remember MSU having off of four vertical receivers was, in fact, the famous "Rocket" play, which was, of course. a Hail Mary. 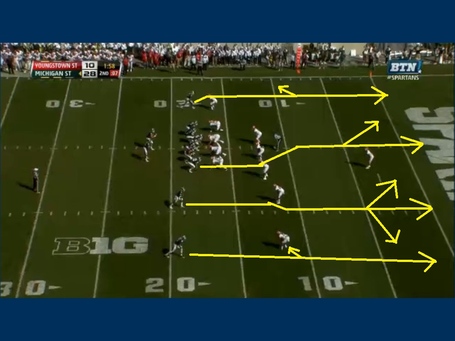 In this game, W&B Enterprises, when faced with how to further break down man-to-man defense, decided that Mom and Dad weren't around to tell them how may verts to run anymore. Four verts it is.

And it's about damn time. For years now, good chunks of the MSU passing game has been lifted wholesale from the Air Raid tradition ('mesh' and 'all curls' are two big concepts), but strangely no (or at least little) four verts, one of the favorite plays of no lesser an offensive mind than Mike Leach. Well, perhaps no more, as MSU takes one more step to bringing their offense up to the present day, if not the future.

Stay in your lanes...

Four verts is based around spreading the field vertically via, well, sending everyone ideally around at least ten yards down-field, as you'd guess, but also horizontally via 'landmarks'. These four landmarks on the field the receivers are supposed to get to are: right numbers, left hash mark, right hash mark, left numbers. This creates four, evenly spaced, 'lanes' that the receivers are running down field into.

So, get down-field near the first down marker quickly, and get to your landmark. But don't confuse four verts as some sort of 'all streaks' route. It's not Rocket. The cool part is...

Then do what you have to do to get open. 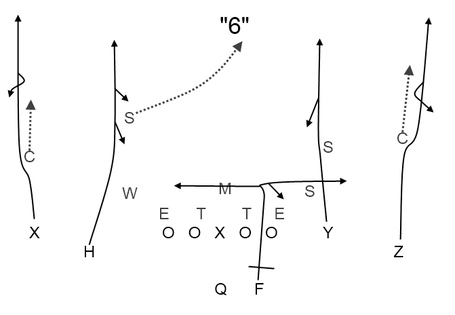 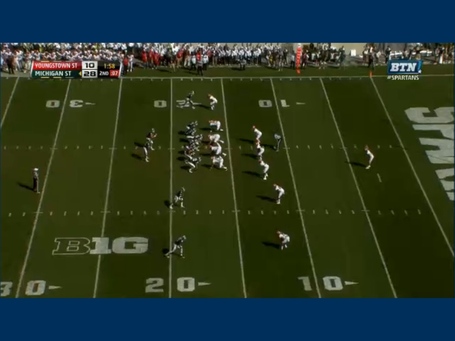 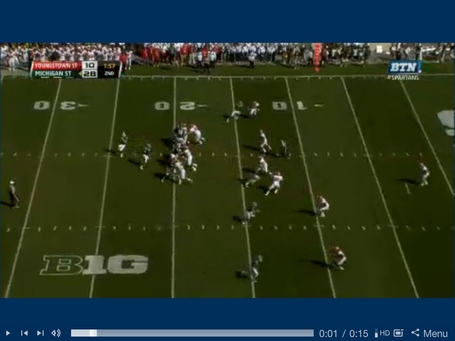 The four receivers are even at this point, and you can see them spreading to their 'landmarks', even though three receivers started on the right side of the field, you can see the tight end working towards the left hash. 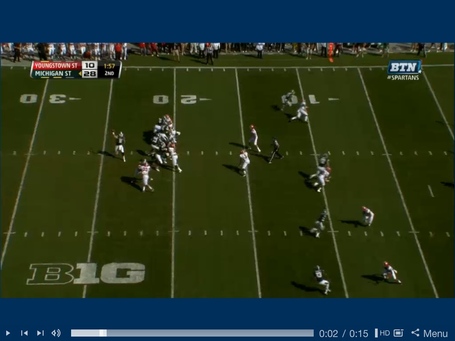 Fowler reads that the CB is still playing way off him as he goes down-field, so he breaks off the vertical route into more of a curl route to get open. Cook and him are on the same page, and as Fowler breaks, Cook is preparing to throw. 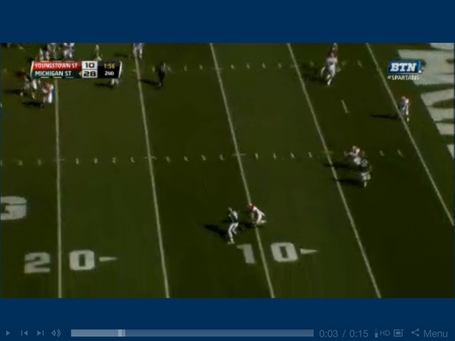 Fowler catches the ball and turns with about a yard of space still between him and the corner back. If Cook had decided to hold off on the throw to Fowler, note that Kings Jr. is filling the space behind his route in an attempt to get open. 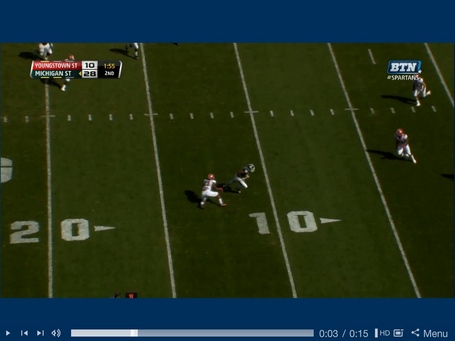 Fowler spins out of that tackle and can turn toward midfield, or head up the sideline. With hindsight, I'd advise heading up the sideline. Note that after he gets by his man, there's seven yards between him and the next YSU player, a credit to the other routes pulling defenders out of position and to the design of the play. 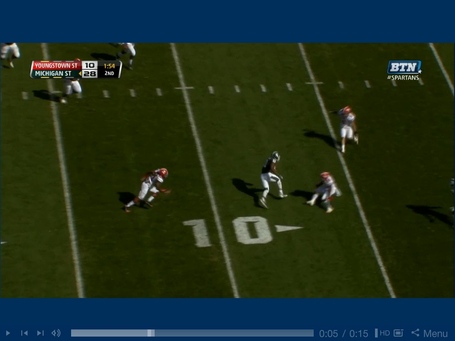 But he heads towards midfield and wrongfoots on the first guy, 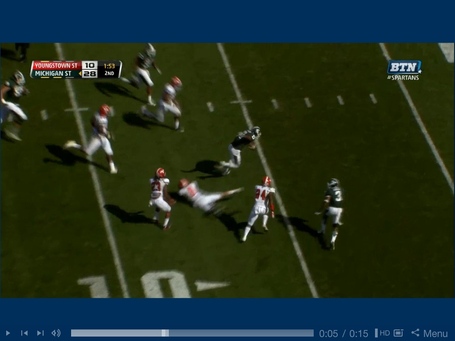 then jukes the next guy's tackle. Yo, Macgarrett Kings Jr. is going to crush poor #24 with a shoulder block. 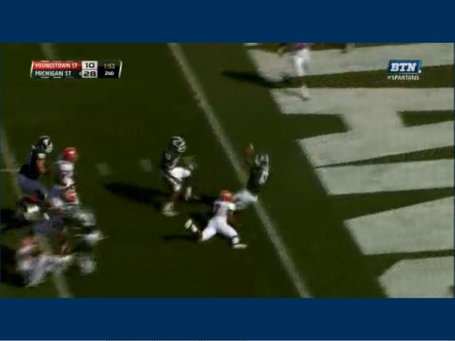 Sit down, young man! Wide receiver blocks. YES. MSU's two best blocking receivers seem to be the 5'10 Kings Jr and the 5'9 Sims Jr, adhering to the principle that there's an inverse proportion between blocking prowess and size among wide receivers.

Anyways, someone finally tackles Fowler, but his momentum carries him into the end zone for the TD. Great catch and run by him.

I like that four verts not only allows the wide receivers to read coverage and react to it, but encourages and builds it into the fabric of the play. The first couple of games have seen a lot of static route running which, OK, is important in a lot of cases to make sure QB and WR are on the same page, but also can be ineffective against man to man coverage. Here the receivers are given freedom, Fowler sees his guy is playing off him, and makes a mid-play decision to cut off his route. Just as important, Cook isn't caught off guard by this and isn't air-mailing the ball into the end zone. Even if the YSU player sticks his tackle on Fowler, this is a nice six or seven yard gain on first down, and if he misses, as we can see, Fowler is still very dangerous in the open field with the ball in his hands.

One possible criticism is that on both this play and a second example that I'll mention in a second: the receiver who breaks off his vertical route in the face of the large cushion from the CB, is breaking it off earlier than the four verts  traditionalists in the Air Raid coaching tree would probably want him to (the first link at the bottom of this article from some former Texas Tech coaches says everyone should typically get 10 yards down-field or so). No big deal here, but something to watch if this play becomes a regular part of the MSU passing offense.

Go here. In the search bar below the video player type in 'Bennie Fowler 17-yard touchdown'. The clip is 15 seconds long.

Additionally, if you want to see MSU try this play for another touchdown early in the game and just miss on a deeper throw to Burbridge in the end zone, BTN also has a video titled 'Youngstown State at Michigan State- top plays' and you can find that play at the 24 second mark.

This is Warner and Bollman borrowing another staple of a smart offensive mind, this one newer than passing triangles, and slipping it into the framework of the MSU offense. Like the triangle concept, it solves another issue from weeks one and two, where receivers weren't able, or allowed, to break out of their called routes to get away from man coverage. I'm very happy MSU seems to have added this play to their arsenal.