Share All sharing options for: Mining the Box Score: Disagreeableness

(Warning: This covers basically all the same ground as Heck's piece. I swear I had this all already written before his posted. And we do disagree some at points. At which points you should probably trust him. Note: This preface is not how you sell a column.)

Thing I disagree with you about #1. The pass interference calls sucked. There are no replays in Notre Dame Stadium, and I don't have the ambition to rewatch the game. So I'm not in a position to argue about the individual calls. But here's the thing: Pat Narduzzi's scheme is designed to leave the corners one on one with opposing receivers on the outside. Brian Kelly is a smart guy. When it became clear the Irish weren't going to get anywhere on the ground, he took it to the only potential weakness the defense has. Trae Waynes played things pretty well in the context of the scheme, but he's still a rookie corner.

The result was 4 pass interference penalties on MSU, 3 of them on Waynes, plus a holding call against Darqueze Dennard. They definitely hurt (especially the one against Dennard that wiped out an INT). But they're part of the deal. Add the penalties as completed passes, and Tommy Rees is still only at 19-39 for 212 yards.

If you're going to be upset about something, be upset about the lack of a pass rush that allowed all those deep passes and resulting pass interference calls to happen. MSU's defensive disruption percentage was just 15.9%, and the disruptive plays that did occur were almost all against the run (6 TFLs on running plays). Zero sacks and a single QB hurry.

Thing I disagree with you about #2. In retrospect, the R.J. Shelton trick play was obviously a bad call compounded by a bad decision by Shelton. MSU was moving the ball on the ground and could have taken the lead and the momentum on that drive. Instead, the momentum swung distinctly in the other direction.

But the coaching staff does have to find some way to build off the modicum of success MSU has had on the ground. They'd been setting that play up throughout the game by putting the Shelton/Lippett package out there and running standard rush plays out of it. The hope was clearly that the ND defense would be looking for the end around and overreact. Obviously, they didn't.

At least they took a shot at grabbing the game by the horns. You're only going to grind out so many first downs 4 yards at a time. We've seen that letting things come naturally to the offense only works sporadically, at best.

Thing I disagree with you about #3. I was fine with the move to put Andrew Maxwell in for the final drive. The offense was completely out of rhythm the previous two drives, once things had shifted to a pass-first mode (out of necessity). If you watch the highlights, nearly all of Connor Cook's longer pass completions came off play action. With two minutes to go, the threat of the run was gone. He'd just been too erratic in terms of accuracy to think he was going to move the ball to the end zone at that point.

Was Maxwell much more likely to get it done? No. But he did very nearly complete a difficult, deep-ish pass to Aaron Burbridge. The decision to run on 4th down was a horrible one, to be sure. But things were effectively over by then anyway. I think Maxwell probably burned his last shot there, but of all the things to be worked up about, I think this ranks very low.

I don't buy the idea that the quarterback "carousel" is a coaching failure. First, if you didn't want open competition in live game action from the start, then Maxwell would have been the guy again this year and things would almost certainly be even uglier than they are now.

Second, is Cook's confidence really going to be that much more rattled by getting pulled late than by the number of poor passes the threw during the game? He doesn't seem like a guy who lacks in confidence. You can just as easily argue the narrative the other way--that he needs the motivation of knowing he has to execute in all aspects of the game to keep the job.

Yes, pulling Cook added some instability to the offensive dynamics going forward. But you're talking about a pretty marginal increase given how unstable things are generally anyways. 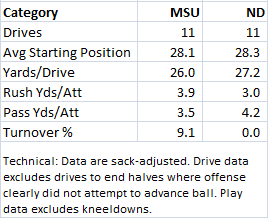 Balanced on a razor's edge because this is what the prophets foretold for all MSU games against BCS-league-quality opponents since the beginning of the epoch.

OK, here's the thing I agree with you about, and it's the only one that really matters going forward, so let's still be friends. 37 pass attempts (/sacks) to 33 (real) rushing attempts. When you're averaging more yards per rush attempt than pass attempt, that's not the ratio you want to see. Even if you take out the last couple drives, when they had to pass every down, it's still basically 50/50. We should be a lot closer to 70/30 in favor of the ground game at this point.

The rushing attack wasn't super explosive--only one run of 10+ yards--but it was very consistent. Only two rushing attempts were negative. And MSU consistently picked up third downs (and one fourth down) in short yardage situations.

I don't think MSU ran any read option or wide receiver runs until the second half. When they did, lo and behold, they put together a long scoring drive. Maybe that was by design, so the ND coaches couldn't adjust as easily, but I don't think you can hold your bag of tricks that long. And when the tricks work, keep using them.

The coaches need to take all of those great passing plays that worked so well with Kirk Cousins at the helm and put them in cold storage. Connor Cook can make plays, but they're different kinds of plays. Use his legs, and use his ability to throw deep. The stuff in the flats just isn't coming anywhere close to working.

Also, I'm with LVS and Chris; MOAR LANGFORD. The guy's got the burst, and we need all the burst we can get. Only putting the ball in his hands 15 times when almost nothing else is working was criminal.

And no more wildcat. Ever. Totally squandered that first down play in the red zone. You've already got a guy who can run into the line for a 3-yard gain taking snaps now.

Penalty Watch. We covered most of this already. Here's some positive spin for you: The offense didn't commit a penalty (ignoring the personal foul on the interception return) until the final two drives. Negative spin: Then they committed several of them.

Special Teams. We've got a placekicker. MacGarrett Kings will do all the things that involve catching the ball. Onward and forward in this department.

Thinking Outside the Box Score. This was my first ever trip to South Bend. I wanted to get down there before the series went on break and Notre Dame commenced its ACC-ishness.

The stories of college football fandom utopia were not exaggerated. Spectacular setting around campus. (It all looks so much more transcendent and less arrogant without the NBC jingles playing over it.) Courteous fans and stadium personnel. (Favorite moment: kid selling candy bars on his front lawn by where we parked exclaiming, "Welcome, MSU fans!") Neato tributes to Joe Montana, Tim Brown, and all those really old guys around the outside of the stadium. (And extra leg room in the stands!)

So basically: Other than that, I really enjoyed the play.

Also: Why don't we have student groups selling grilled foods around campus? I'd be more than happy many weeks to just haul my beer in and pay $3 for a bratwurst. Plus: Fundraising and the common good and so forth.

One gripe: Could we can the canned noise and marching band noise-for-the-sake-of-noise when the opposing team is huddling on offense? You're blemishing a classic sports experience for a marginal competitive advantage, guys.

The Big Finish. Now that I've spent this much time arguing with you, now allow me to annoy you by trying to cheer you up. At the macro level, this was a marginally encouraging performance. The line was about 5, and that seemed a little generous to MSU. We lost by 4. MSU actually gained (slightly) more yardage per drive in this game than they did against either Western or South Florida. Notre Dame's defense isn't as good as it was last year, but it's pretty clearly a step up from the two previous D-1 foes. And this was a young offense playing its first road game.

At least you can sort of squint and see how MSU could win 6 or so Big Ten games: build small leads with the rushing attack, force opposing offenses to take some chances, capitalize on mistakes. MSU's offensive disruption percentage was actually quite respectable at 15.7%. Some of the problems are masked by Cook's scrambling, but it really boils down to either (1) execute better in the passing game or (2) use the passing game less.

MSU was always going to need one big break in this game. It never showed up. If the Rees fumble holds up or an MSU player covers up that muffed ND punt or that Dennard interception doesn't get wiped out, maybe this swings the other way. Once we went down a score late, it was effectively all over (which is why the Maxwell thing really isn't a thing IMO).

The fact that this becomes one more in a string of never-ending close losses makes it worse than your run-of-the-mill tight nonconference loss. But this is not the time to panic. When we lose to Iowa 9-6, that will be the time to panic.

Until then, here's hoping/wishing/praying/begging the coaches accelerate their evolution in terms of offensive approach. At least they've got two weeks to do it.