I made the drive down to South Bend, Indiana on Saturday to watch Michigan State take on the Fighting Irish in Notre Dame Stadium.

Share All sharing options for: The South Bend Experience

The aroma of cigar smoke lingered in the 65-degree autumn air. I clenched a room-temperature hot dog doused with mustard in my hand and could see Touchdown Jesus looking over the food and beer-laden asphalt I was standing on out of the corner of my eye.

I was in South Bend, Indiana, tailgating before Notre Dame took on the Spartans on Saturday.

We stumbled into South Bend on the wrong foot, as we mistakenly pulled into town at about 12:45 p.m., a little bit later than we expected. The roads were clear for the entire four hour trip, but we assumed that the city was part of the Central Time Zone - as it turned out, it's the last county in the Eastern Time Zone. Apparently, this has been a problem in the past— something I can definitely imagine— and in 2006, Indiana voted on whether all of Eastern Indiana (South Bend included) should move to the Central Time Zone. Although they eventually came to the conclusion that Eastern Indiana should stay in the Eastern Time Zone, some residents are still mad. I talked to a local who wanted to switch to the Central Time Zone. Why? "I wanted to watch more Monday Night Football."

The town was underwhelming as we pulled in. It was covered in strip malls and department stores and kind of reminded me of Mount Pleasant, the home of Central Michigan. The sky was mostly cloudy and the atmosphere seemed very tame around the town for a game starting in less than three hours. The closer we got to the stadium, however, the more crowded it got. We paid $20 park just several blocks from the stadium, and went to a bar called "Mulligans," an Irish bar (of course). We sat in an outside tent to watch the Georgia Tech-North Carolina game, and the restaurant workers were some of the nicest people we met in the whole town. When our clan of MSU faithful arrived in the tent, a worker immediately flipped on the Michigan State fight song and said "may the best team win", which turned out to be a very ironic comment.

We then walked a couple more blocks to a friend's tailgate, and that's where we got our best look at the Notre Dame campus. Near me, there's a private catholic high school, Orchard Lake Saint Mary's— Kalin Lucas and Dion Sims are distinguished alumni— and Notre Dame's campus looks like an enlarged version of the St. Mary's campus. Very well-cured lawns, facilities named after donors, religious hints sprawled all across campus. The whole thing.

As soon as we turned the last corner, the first thing that caught my eye was the most marvelous interesting grandiose thing I saw at Notre Dame, Touchdown Jesus. I had always heard about it and had seen it on television, but never really saw it in its entirety, and boy was it large. It was crystal clear in view despite being the entire enormous parking lot and stadium away from me. 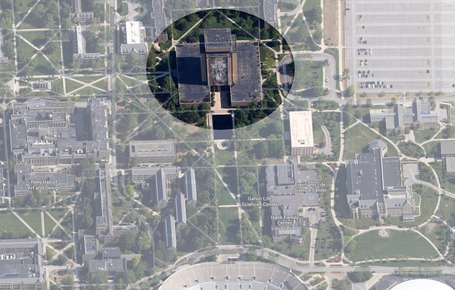 Our friend's tailgate was in the large parking lot just south of the stadium - it was insane. In East Lansing, tailgates are spread all around the area surrounding the stadium, but it seemed like in South Bend every single tailgate was somewhere in this parking lot. As we walked through the lot to get to our tailgate, fans were much nicer than we expected. Sure, there were a couple of weak insults like "MICHIGAN STATE SUCKS!" or "WHAT'S THAT CRAP ON YOUR SHIRT?", but nothing very hurtful and a majority of the people were very accommodating and peaceful.

It was finally time to head to the stadium for the final stage of our trip to South Bend.

The interior of Notre Dame Stadium is just the first step to an experience I probably won't ever forget. The brick walls lined with photos of Fighting Irish legends were just my introduction to the beautiful stadium and atmosphere. We continued up the ramp and made our way to our seats.

Once we reached our seats, the first thing that stuck out was the sheer simplicity of the stadium. The stadium was built 83 years ago and runs perfectly. Contrary to other stadiums I've been to (Ohio Stadium, Camp Randall Stadium, Spartan Stadium), it has only one level. No upper bowl, just one sprawling level that fits 80,795 fans. At this point, one would think you could barely fit in your seats (which are wooden, still, by the way), but that's not the case. Not often do you see a one-level stadium pack in 80,000 fans comfortably. Spartan Stadium, with a capacity of 75,005, has two levels and utilizes them. While the stadium looks so much bigger than Notre Dame's, every weekend, the Irish pack in more people  in a much more simple way. It's impressive.

Once the Irish took the field, magic found its way through the air. The atmosphere was electric. I'm not the type to dwell on cliches and narratives, but this was one of the coolest moments I've ever experienced. While the Irish were doing their warm-up drills, the sun peeked out of the mostly cloudy sky, illuminating Touchdown Jesus perfectly. The crowd was participating in chants of unison, the gold on the helmets seemed more shiny than they ever had before and the yellow flower beds lining the two sides of the stadium were glowing in the sunlight. I finally came to the realization of what it meant for Notre Dame players to put on that shiny helmet, navy jersey and gold pants each and every Saturday. Playing for Notre Dame is prestigious, and I never fully grasped that until actually seeing a game live. Despite there being a large contingency of MSU faithful at the game, the Notre Dame crowd was really the most breathtaking aspect of the game.

While the stadium has kept up with modern times logistically, the commencement of the game really exploited the stadiums biggest weakness - the lack of technological advancements. Coming from going to every MSU game and seeing some of the biggest video boards in college football to going to a stadium with no video boards whatsoever is a culture shock, to say the least. Just to go along with that, if there's one game I have ever witnessed that needed live video replays more, it was this game. The MSU contingency's anger with the questionable pass interference calls were seemingly going to turn violent, basically because they could not see the plays.

The game, oddly, didn't really go along with the rest of the day. While the majority of our trip was nice and calm, the game was frustrating and somber. Clueless Notre Dame fans and egotistical Spartan fans almost got in a fight behind us. I will forever have the memory of a Michigan State fan behind us sarcastically screaming "TOMMY REES: NOTRE DAME LEGEND" fifteen times every drive. Saying that it was a "bad scene" would probably be an understatement.

After Andrew Maxwell came in, ran for it on 4th and 20 and walked off the field with boos precipitating from the crowd, the tensions died down. Notre Dame fans went home relieved, and Spartan fans returned to their territory defeated.

Driving off into the South Bend sunset, I thought about my trip. Although the game was awful and I knew I was going to spend the next day whispering due to a lost voice from booing so much, the stadium was amazing along with the atmosphere and people. I think my trip to South Bend was a success.