Film Review: How MSU Adjusted Cover 4 to Shut Down ND

We look at how MSU adjusted their cover 4 to shut down Notre Dame's offense.

Share All sharing options for: Film Review: How MSU Adjusted Cover 4 to Shut Down ND

Hey guys, I'm SpaceCoyote. I'm a contributor of Maize n Brew and also the creator of Breakdown Sports, a blog that covers the X's and O's, technique, and schemes of Big Ten football teams (as well as more in-depth recruiting breakdowns in the off season). I was able to watch the MSU-ND game last Saturday (every Saturday you can follow me on Twitter @SpaceCoyoteBDS as I send out live "coaching points", or things that maybe the untrained eye wouldn't notice right away), and I had some interesting take aways from the game, particularly from MSU's stellar defense. Next week, I will also feature an article exclusively on my blog about an interesting coverage MSU ran against ND. I urge you to check out the site if you're interested and learning more about the game we all love, and I hope you enjoy the article. Let me know in the comments or over twitter if you have any questions and I'll be more than glad to answer. Thanks for letting me contribute to The Only Colors.

Michigan State is known for their use of the Cover 4 defense, pretty much all day every day. While they occasionally make forays into other defenses, it is more often the nuanced changes they make within their cover 4 that confuses offenses. Against Notre Dame, the Spartans rolled up their safeties and played them a bit tighter to the #2. We'll look at how this affected Notre Dame, how the Fighting Irish tried to counter this, and how Michigan State was still able to hold down their offense.

Cover 4 - ND's Initial Attack
Previously I have written about MSU's defense, both their front and their favorite coverage. Against Notre Dame, Narduzzi and Dantonio made a nuanced adjustment with how they played their safeties.

One of the constraints offenses run on MSU's defense is the bubble screen to the field side. They attempt to draw the OLB in against the run and bubble outside, putting him in a quandary to defend both inside and out and be responsible for a lot of open space. 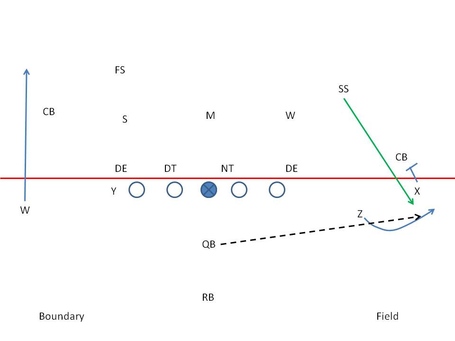 Narduzzi has adjusted his cover 4, even prior to this game, to defend this. MSU's corner will almost always press to the field side. This prevents the WR from getting any distance between the CB and the bubble receiver. It also forces the WR to block immediately and hold that block longer, something most WRs aren't necessarily good at. This is an adjustment to prevent any sort of immediate horizontal stretch passes such as the bubble screen.

But on top of that, look how close to the LOS the safety is playing. Cover 4 safeties will already play relatively down hill, but this safety is essentially lined up in man coverage and there is no hesitation once the slot receiver begins bubbling outside. Throughout this game on the field side, MSU committed their safety almost immediately to coverage, partially because they simply did not respect ND's ability to run against MSU's front 7 alone, but also to take the #2 out of the game completely.

Another of the favorite ways of offenses to attack the cover 4 is at the intermediate sideline or in the curl/hook region short, especially to the short side of the field. Typically, the safety will not pick up the #2 receiver until he gets about 8 yards depth, or beyond the underneath LB. So offenses will try to pick on the OLBs, who must be responsible in defending the run as well as the outside short third of the field. 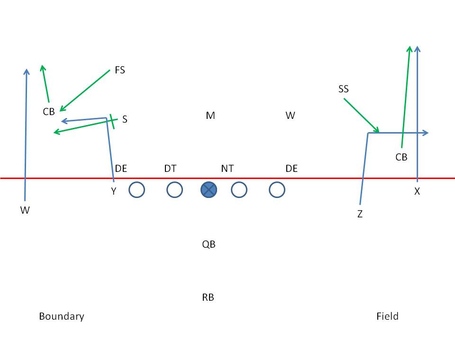 From about as early as Max Bullough told a national audience that he couldn't smell, the Irish tried to the attack with this. Here, ND completes a pass deep in Rees's progression, but you see him initially try to attack the boundary side, only to realize that the quick out from the #2 had been jumped immediately by the safety.

Now, I understand that MSU is actually blitzing their LB to the boundary and drops into a cover 1 scheme from their nickel package, but this wouldn't be the last time that the Spartans were able to disrupt Rees's timing and initial reads. All day, MSU harassed Notre Dame's #2 receivers immediately off the LOS. But rather than just simply stick with the OLB being responsible on the #2, if ND lined up with a slot receiver and still had a RB in the backfield, MSU would defend the #2 with their safety on the boundary side as well.

And even when it was an empty backfield, any #2 receiver would essentially be bracketed rather than the safety sticking with his common cover 4 principles. Normally, he would stay deep to help on the outside receiver if #2 never passed the OLB. Not the case against ND.

One more thing to note is just how much: a) MSU's LBs aren't threatened by the run, and b) how they are going to force ND to win on the sideline, as the LB is completely walling off any route to the inside.

Notre Dame's Adjustment
So early on, it pretty much seemed like every other play was the Go-out concept. I'm not even sure I'm exaggerating by saying that. But think about it: the safety is essentially playing bracket coverage on the #2 to the boundary and the other safety is pretty much covering the other #2 to the field straight up. If the #2 receivers run outs, where do the safeties go? To the sideline. So why is Notre Dame constantly throwing deep to the sideline where the Spartan's aggressive corners can use the sideline as an extra defender? It's a longer pass, it's easier to defend, and it requires more tough. Yet it took the Irish almost two full quarters before they decided to utilize the post route. 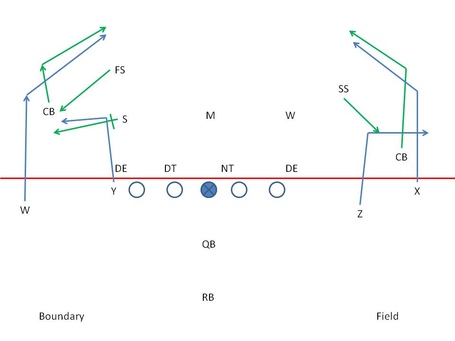 What you see in the diagram above is that the post is running into a lot of open grass, making it extremely difficult for MSU's corners to cover. But after getting beat inside with the post a few times (ND didn't complete these passes despite receivers flattening their routes and breaking open), MSU's corners started adjusting.

So MSU started playing high and inside rather than in their trail technique. This opens up routes like comebacks and hitches on the outside, but MSU knew Rees didn't have the arm strength to threaten with those types of passes. They were comfortable pressing and then getting inside and upfield of the receivers. While DD unnecessarily gets his arm out on the receiver, what is obvious is the great position he has when the ball is thrown.

What About that Hook Zone?
I talked about offenses attacking MSU in the curl/hook zone. Well, for a few reasons, ND only went to this once, failed, and then never returned. The biggest reason, in my opinion, is because ND couldn't throw outs to the field with Rees's arm strength and MSU picking up the field #2 with their safety. This means the LB didn't have to flare as quickly. The second reason, this route sucks:

Now, to give this OLB credit, that is a great job of gaining lateral distance and depth, feeling where the drop needs to go, and being very disciplined in his drop. But if you're a WR you need to adjust to this and get into the bubble of the defense.

Why Didn't ND Adjust in Other Ways?
Well the most obvious way to adjust, with comeback routes by the #1 to the field, wasn't really an option because I don't think Rees could make the throw. What I don't understand is why they never ran dig routes with the #1, especially after the out route essentially opens up the middle of the field. The flatness of the route would allow the receiver to get underneath the coverage of MSU's corners. I also thought they should have ran more crossing routes. Either you are forcing the safety to follow a receiver across the field (the difficulty here is getting by the LB who is walling inside, but in open space you should be able to), giving the #1 more room to operate, or you are running off help and forcing MSU's corners to cover the #1 across the entire formation. Two adjustments that I thought ND should have made but rarely if ever tried.

Conclusions
MSU came in with a game plan of how they were going to utilize their cover 4 scheme. That was to bracket the #2 to the boundary and pretty much man up on the #2 to the field with the safety. The goal was to completely take away the #2 and force ND to beat them with the deep ball. They were successful doing that; they were perhaps more successful drawing flags, rightly or wrongly. But overall, Michigan State largely shut down the Irish attack, and it was thanks in large part to Narduzzi making small tweaks in his favorite coverage, and MSU forcing ND to get by them with great execution, which they were rarely capable of doing.